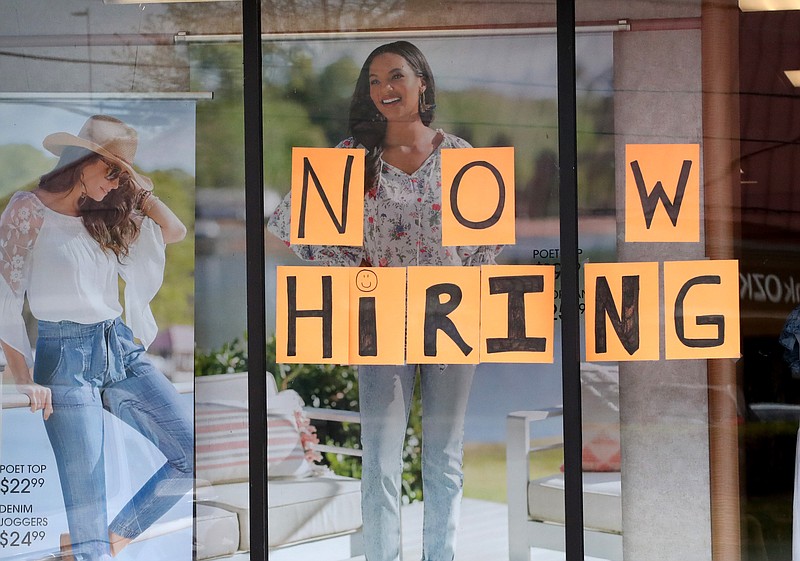 A now hiring sign is posted in a store front window in the 4000 block of Central Ave., Tuesday, April 6, 2021. Photo by Richard Rasmussen of The Sentinel-Record

County Judge Darryl Mahoney said the extension of Pandemic Unemployment Assistance through early September, along with the $300 a week that the unemployed receive in enhanced benefits, has hollowed out the Hot Springs area workforce.

"I talked to more people this past weekend who are looking for employees," Mahoney told justices of the peace. "It's adversely affecting their business. The money that's being given out through unemployment, and the extra incentives on top of that, are encouraging people to take the summer off.

"We're coming into one of the biggest tourist seasons we've had here. People have been cooped up, and they're looking for any reason to get out. The restaurants and hotels, people who are in that industry, are struggling to find employees. It's frustrating."

Greater Hot Springs Chamber of Commerce and Hot Springs Metro Partnership President/CEO Gary Troutman told the committee that staffing limitations at a chain restaurant's local franchise forced it to close for a day.

"It's almost easier to stay home and do nothing and get paid," Troutman told the committee after presenting the report that the county requires before releasing the monthly installment of the Hot Springs Metro Partnership's $75,000 annual contract for economic development services.

The latter rescue package included a $1,400 stimulus check for people with adjusted gross incomes of up to $75,000. They qualified for an additional $1,400 for each dependent, regardless of the dependent's age, and the increase in the child tax credit from $2,000 to $3,600 for children younger than 6 and $3,000 for older children. The credit is fully refundable, meaning a refund is paid even if the credit exceeds an individual's tax liability.

"You're seeing people walking around with more money in their pockets than they've ever had their entire lives," McKee told the committee. "Some of them got $10,000 stimulus checks, depending on how many kids they have."

The U.S. Bureau of Labor Statistics' preliminary report for January showed that the Hot Springs Metropolitan Statistical Area's labor force was larger than it was in January of 2019 and 2018. A workforce of 41,156 was reported in January, compared with 40,647 in January 2019 and 40,025 in January 2018.

The labor force comprises people 16 and older who are working or actively looking for work, according to the agency's definition.

County government has also benefited from federal relief, receiving $2.35 million from the state's $1.25 billion CARES Act allocation. The Quorum Court appropriated more than $600,000 of the funding in December to pay $1,200 hazard bonuses to almost 400 full-time county employees and $600 bonuses to more than 20 part-time employees.

Elected officials, poll workers, the county board of equalization and law library employees were excluded from the payments.

The Finance Committee advanced an ordinance Monday night that appropriated $55,389 from the funding for employee health, dental and life insurance benefits that the county paid in December and January.

A state Department of Finance and Administration official told the steering committee that, per U.S. Department of the Treasury guidance, documentation such as payroll records and duty rosters, could be used to substantiate local governments' pandemic-related labor costs.

"That will be the extent of the documentation that's necessary," Department of Finance and Administration Deputy Director and State Comptroller Paul Louthian told the committee in September. "My opinion is they've opened this up to say if you have public health and safety employees, and you're paying them during this time period to work with the public, we're going to pay you for this expense."

The county finance department said the Coronavirus Relief Fund had a $1.64 million cash balance at the end of last week.