Bid for overhaul of Medical Board clears committee 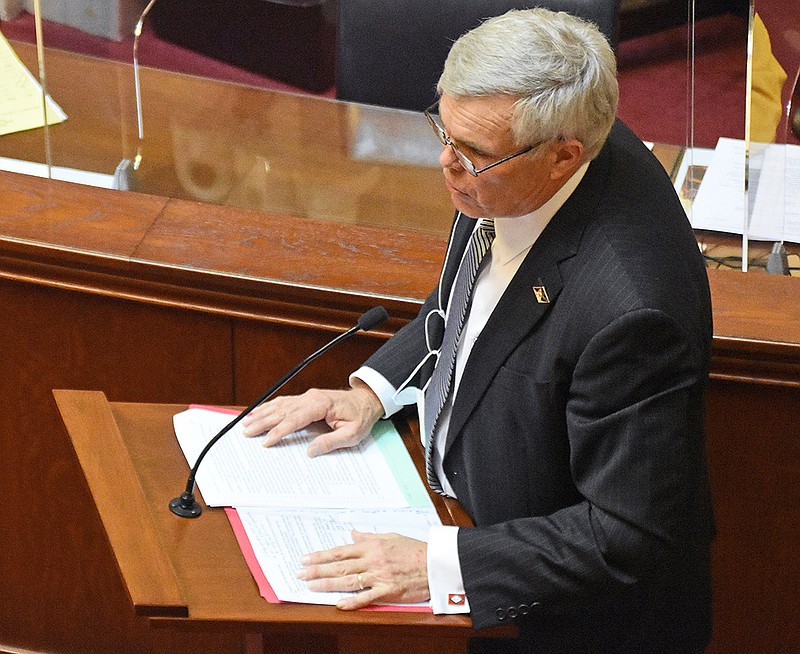 A measure to dissolve the state Medical Board's current membership and split new appointments among the governor and leaders of the House and Senate gained traction Wednesday in the state Legislature.

The Senate Committee on Public Health, Welfare and Labor voted to advance Senate Bill 570, by state Sen. Dan Sullivan, R-Jonesboro, which would end the terms of all 14 members of the board before the end of this year.

The bill would also add one seat to the board, for a total of 15, and have appointments split among the governor, the speaker of the House and the Senate president pro tempore.

Currently, all Medical Board members are appointed by the governor.

Sullivan, a frequent critic of Gov. Asa Hutchinson, said Wednesday that the board, through its decisions and oversight of the state's doctors, was partially responsible for Arkansas' poor rankings in health outcomes.

"There are times when a reset is appropriate, and I think this is one of those times," Sullivan said.

The Medical Board has sparked friction with the state's lawmakers in recent years, particularly with regard to its handling of doctors accused of wrongdoing and poor practice.

In October, the board voted to allow a physician at a Little Rock abortion clinic to continue practicing medicine after his license had been temporarily suspended over accusations that he certified a 12-year-old for a medical marijuana card, in violation of state law.

The Family Council, an influential, faith-based advocacy group, said on its website at the time that the board's decision "raises a lot of questions."

Sullivan said he was also concerned about the board's close ties with the Arkansas Medical Society, which he called a "powerful political lobby."

Under current law, the governor is supposed to make 10 appointments -- nearly three-quarters of the board's membership -- based on consultations with the Medical Society.

Sullivan's SB570 would reduce the number of Medical Society-related appointments to three, to be split by the governor and legislative leaders.

Sylvia Simon, the chair of the Arkansas Medical Society, did not respond to a phone call seeking comment Wednesday.

"We are no closer to the Medical Board than any other professional association is to the boards that license their members," Wroten said.

Bruce Campbell, a senior adviser to Hutchinson, told the committee that the governor's office opposes taking away the governor's appointments to the board. A representative of the state Department of Health also spoke against the bill, raising concern about the loss of "institutional knowledge" if the current board is dissolved.

In a statement released by a spokeswoman, Hutchinson said: "These appointments are typically executive branch responsibilities and the proposed change to the legislative branch is significant. I look forward to understanding more as to the reasons for this proposal."

Rep. Stephen Magie, D-Conway, also spoke in defense of the board and argued against "the implication that there's been inappropriate exchanges of information between the Medical Society and the Medical Board."

Magie, a licensed ophthalmologist, said the board "does a great job and have always been there to serve and protect the public."

After more than a half-hour of debate Wednesday, the eight-member committee voted 6-2 to send SB570 to the full Senate.