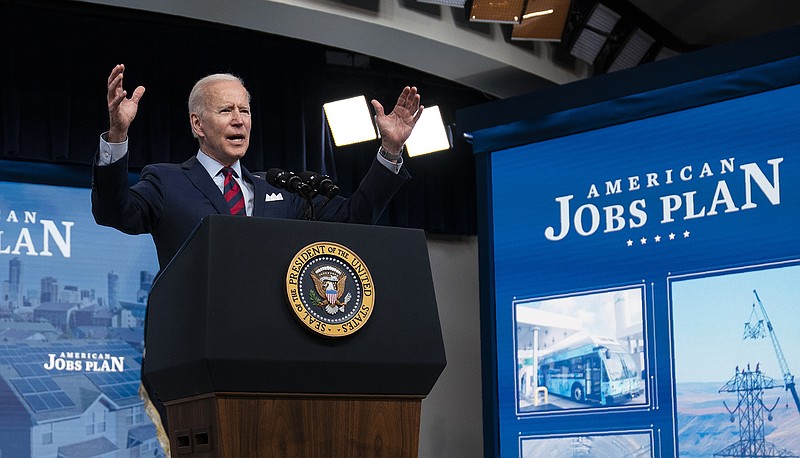 President Joe Biden said Wednesday that “compromise is inevitable,” but he so far is not backing down from insisting that his broad spending proposal be offset by corporate tax increases. More photos at arkansasonline.com/48potus/. (AP/Evan Vucci)

WASHINGTON -- President Joe Biden on Wednesday said he was open to compromise with Republicans on how to pay for his approximately $2 trillion jobs and infrastructure package, but insisted that inaction was unacceptable.

His comments, delivered at the White House, came after passing a $1.9 trillion stimulus bill into law without any GOP support. The infrastructure package marks another of his top campaign promises, but it has been met with a torrent of criticism from Republicans, and even some Democrats have appeared hesitant.

"Debate is welcome. Compromise is inevitable. Changes are certain," Biden said. He added he would soon invite Republican lawmakers to the White House and that the administration is "open to good ideas and good-faith negotiations."

But, Biden said: "Here's what we won't be open to: We will not be open to doing nothing. Inaction is simply not an option."

[Video not showing up above? Click here to watch » https://www.youtube.com/watch?v=UdhLvLlUYnw]

He said he was willing to agree to a lower corporate tax rate than his proposal of 28% if Republicans had other ideas that would work. Such a change could be politically necessary. Sen. Joe Manchin, D-W.Va., said this week that he supported raising the corporate rate from 21% to 25%, but not all the way to 28%.

"If I don't vote to get on it, it is not going anywhere," Manchin told a local news outlet on Monday. "It's more than just me. There are six or seven other Democrats that feel strongly about this. We have to be competitive and we are not going throw caution to the wind."

Some Republicans, like Senate Minority Leader Mitch McConnell, R-Ky., have said they support a more scaled-back infrastructure plan, but they have attacked both the proposed tax hikes and the large scale of Biden's pitch.

McConnell chided Biden for partisanship, and said Tuesday that his side would not be supporting the $2.3 trillion infrastructure package.

"For a president who ran as a bipartisan, I haven't seen that yet," McConnell told reporters in Kentucky.

McConnell said Biden is a "terrific person. I know him well, I like him. We've been friends for years. A moderate he has not been."

On Wednesday, Biden said he would work with Republicans on how best to design the package but he was unapologetic about the scope of his proposal. He said the money was needed to finance projects beyond just roads and bridges. He said, for example, that new spending was needed to do things such as improve waste treatment plants and remove asbestos from schools.

"Maybe it's because I come from a middle-class neighborhood, but I'm sick and tired of ordinary people being fleeced," he said.

Biden has so far not backed down on his insistence that the proposed spending increases be offset by a range of corporate tax hikes. This has prompted bipartisan unease. The Department of Treasury on Wednesday outlined the proposed tax increases on businesses that Biden is seeking in his initial plan. It would raise about $2.5 trillion over 15 years, meant to offset the costs of the infrastructure package. These changes would have to be approved by Congress. They would also amount to one of the largest tax increases in decades.

"I'm open to ideas about how to pay for this plan," Biden said. Biden added he would not raise taxes on households earning less than $400,000 per year, a pledge he made during the presidential campaign.

In a 19-page report, Treasury officials called for more than a half-dozen tax measures affecting U.S. firms, including an increase in the corporate tax rate and subjecting the overseas earnings of businesses to higher tax rates.

Unlike the $1.9 trillion stimulus plan that passed in March, the cost of which was almost entirely added to the national debt, the White House has said it will seek to pay for the infrastructure plan through tax hikes on businesses and corporations.

Fifty-five corporations saw zero federal tax liability in 2020, according to a report this week by the Institute on Taxation and Economic Policy, a left-leaning think tank. The amount of corporate tax revenue raised by the government has fallen from above 2% of the United States' gross domestic product before the GOP tax law to half that, the Treasury report says.

"Here you have 51 or 52 corporations of the Fortune 500 haven't paid a single penny in taxes for three years. Come on, man. Let's get real," Biden said this week.

Biden's plea arrived as House and Senate leaders forged ahead with their early work to translate his multitrillion-dollar blueprint into a legislative reality. The process of writing infrastructure change into law is one that spans much of Congress, where many Democrat-led committees have already held hearings to examine federal funding for roads, bridges, pipes and other policy priorities including housing and climate change.

In doing so, Democratic leaders have echoed Biden's pledge to work with Republicans and compromise. But they have also threatened to move forward without Republicans if they must. Democrats passed the $1.9 trillion coronavirus stimulus package in March without GOP support through a budget process known as reconciliation, which in the Senate only requires Democrats to obtain 51 votes to pass legislation.

Democrats have signaled they could use reconciliation again to adopt some or all of Biden's infrastructure changes, seeking to bypass a potential Republican filibuster. They gained an additional political advantage Monday, when the Senate's parliamentarian appeared to open the door for the party to use reconciliation at least three more times than they initially anticipated between now and the 2022 midterms. So far, Senate Majority Leader Charles Schumer, D-N.Y., has declined to say how, exactly, he plans to take advantage of the ruling.

As the administration ramps up its push for the package, Biden transportation secretary Pete Buttigieg spoke on a Zoom call with moderate House lawmakers in the New Democrats caucus Wednesday for about 45 minutes, two people familiar with the matter said. They spoke on condition of anonymity because they weren't authorized to reveal the back and forth. The call reflected how the Biden administration is hearing opinions from a wide range of people about what should and shouldn't be included in the package.

On the call, Rep. Cindy Axne, D-Iowa, raised concerns about the impact of transitioning to an electric vehicle fleet on farmers in Iowa, given the role of ethanol in gasoline production, the people said. Several lawmakers on the call also asked Buttigieg to press for high-speed rail, the people said.

Many Democrats are trying to push the White House to keep the package as big as possible.

"The American people want bold action to address our country's many challenges, and Democrats now have more options to overcome Republican obstruction and get things done," Sen. Ron Wyden, D-Ore., the chairman of the Senate Finance Committee, said in a statement Monday heralding the announcement.

First, however, Democrats face the task of passing major tax hikes to fund their infrastructure push. The centerpiece of Biden's tax hikes is increasing the corporate rate from 21% to 28%, after President Donald Trump's 2017 tax law cut it from 35% to 21%.

The report released by the Treasury also details more than $700 billion in new government revenue through revamping America's international tax system. In particular, the plan would increase the global minimum tax paid by U.S. firms operating abroad from about 13% to 21%. It would also repeal provisions from the Republican tax law that the Biden administration says encourage outsourcing of U.S. manufacturing and production.

Parts of corporate America have appeared more open to Biden's push than expected. John Zimmer, the CEO of the ride-share company Lyft, told CNN that the company supported the 28% corporate tax rate and Biden's push for electrical vehicles and infrastructure. Amazon founder and CEO Jeff Bezos also said Tuesday that the e-commerce giant supports a rise in the corporate tax rate, while also calling for a "balanced solution that maintains or enhances U.S. competitiveness." Still, Biden's plans have been sharply criticized by American business groups and congressional Republicans.

"What the president proposed this week is not an infrastructure bill," Sen. Roger Wicker, R-Miss., said earlier this month. "It's a huge tax increase, for one thing. And it's a tax increase on small businesses, on job creators in the United States of America."

The Treasury report included an analysis showing a rising share of income from multinational corporations ending up in tax havens, along with data showing only a handful of countries in the world collect less revenue from corporations than the United States.

Conservatives have called these measures misleading. Donald Schneider, who served as chief economist to Republicans on the House Ways and Means Committee, said the revenue declines are overstated due to temporary provisions in the GOP tax law. Schneider said the analysis also misses the rise in pass-through entities, which make the fall in corporate revenue appear larger than it actually is.

The administration has countered with estimates from Moody's Analytics showing the spending from Biden's infrastructure proposal would grow the economy by about 1.6%. The Treasury plan also calls for beefing up corporate tax enforcement at the Internal Revenue Service; shifting subsidies for fossil fuel production to clean energy production; and pushing a global minimum tax through international negotiations.

"By choosing to compete on taxes, we've neglected to compete on the skill of our workers and the strength of our infrastructure. It's a self-defeating competition, and neither President Biden nor I am interested in participating in it anymore," Treasury Secretary Janet Yellen wrote in a Wall Street Journal op-ed announcing the plan. "We want to change the game."

Information for this article was contributed by Jeff Stein and Tony Romm of The Washington Post; by Nancy Cook of Bloomberg News (WPNS); and by Lisa Mascaro and Jonathan Lemire of The Associated Press. 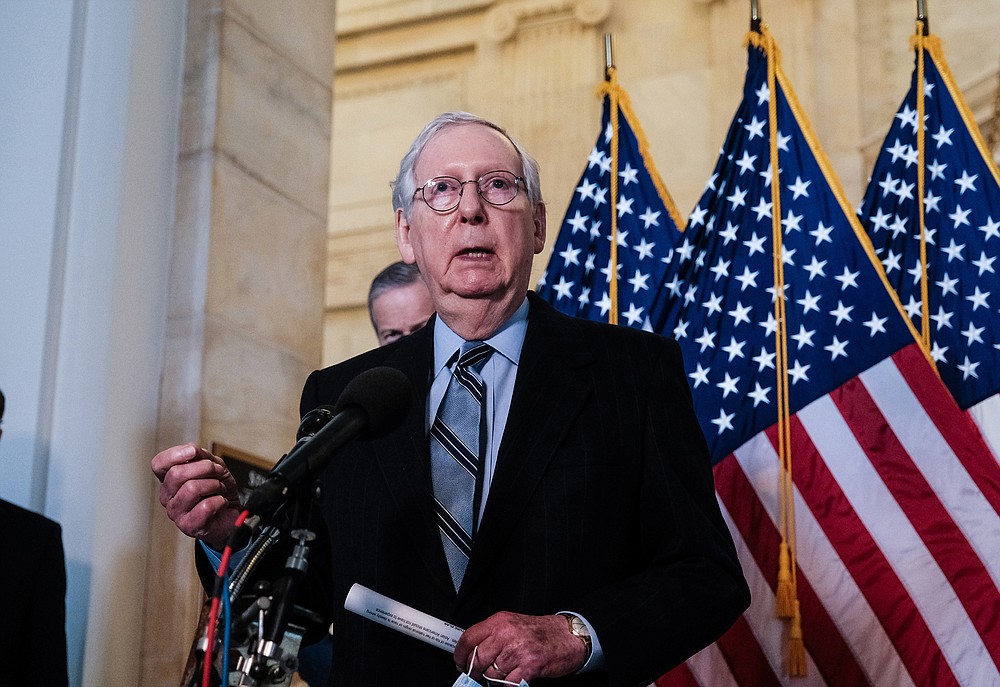 Senate Minority Leader Mitch McConnell, shown at a news conference at the Capitol in late March, on Tuesday chided President Joe Biden for partisanship as he criticized the size of Biden’s infrastructure proposal and Biden’s call for tax increases. McConnell said Biden is a “terrific person; I know him well, I like him. We’ve been friends for years. A moderate he has not been.” (The New York Times/Michael A. McCoy)
ADVERTISEMENT