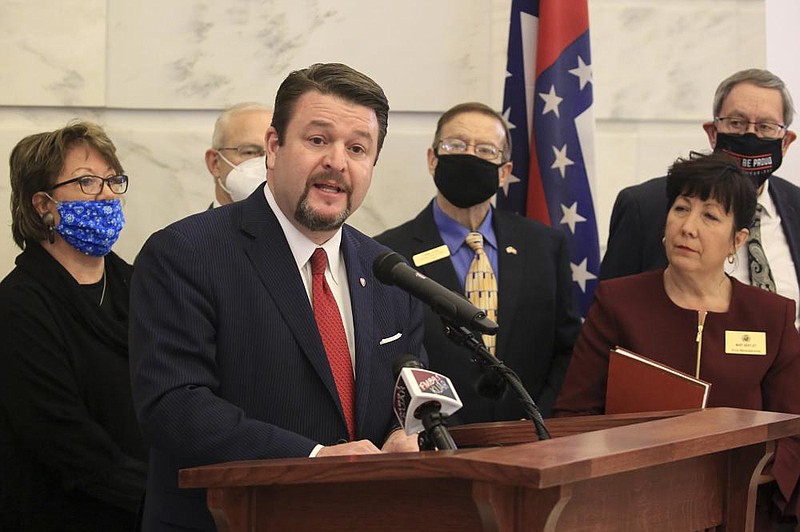 Sen. Jason Rapert, R-Conway, speaks Wednesday Feb. 10, 2021 at the state Capitol during a press conference about his bill, SB6, that would ban all abortions except those to save the life of a mother. (Arkansas Democrat-Gazette/Staton Breidenthal)

A bill that would allow law enforcement agencies to charge records-requesters for costs associated with reviewing and redacting audio and video footage is headed to the Arkansas House.

The legislation permits state and local public safety agencies, jails and dispatch centers to charge requesters up to $20 per hour for each hour of running time of audio, video or audiovisual media provided to the requester, beyond the first three hours of personnel time required to fill the request.

Sheriffs and the Association of Arkansas Counties say SB346 would help with transparency by offsetting the strain of fulfilling large requests, while open-records advocates say such charges are unprecedented in state law and would be a burden to the average Arkansan.

"We've already paid for those public records, so I have concerns for those people who cannot afford $20 an hour," Joey McCutchen, a Fort Smith attorney representing the Arkansas Transparency in Government Group. "I think the bottom line is we've got to be careful about what we're doing to our Freedom of Information Act."

Mark Whitmore, legal counsel for the Association of Arkansas Counties, told the committee that the bill is intended to help law enforcement agencies successfully implement body cameras. The proposed legislation also lays out standards for how long criminal investigation documentation must be kept, based on the type of investigation.

"You've got to address the storage issues and also address the notion that extensive FOI requests will cause much-important resources like dispatchers and drivers and law enforcement officers to have to be allocated toward very extensive requests," Whitmore said.

"We do not, in Faulkner County, have an overwhelming amount of FOIAs that occur within our department. However, we do have them," Ryals answered, noting that the agency received more than 200 requests for audio and video records since 2018.

Ryals said most burdensome requests don't come from media organizations or the public, but from attorneys and firms.

Beth Coger, a co-founder of the Arkansas Justice Reform Coalition, said $20 per hour of footage isn't necessarily reasonable for every Arkansan.

"It will be a hardship for ordinary people in the community like me who need to obtain information, information that we're entitled to receive under the law as it exists," Coger told the committee.

McCutchen and Sarah Moore, another Arkansas Justice Reform Coalition co-founder who spoke against the bill, said they were concerned about a provision in the bill that allows records that are not associated with misdemeanor or felony criminal investigations or law enforcement uses of force or complaints to be disposed of after 30 days.

Rep. Rick Beck, R-Center Ridge, the bill's sponsor in the House, said disposal after 30 days is closer to the current norm.

"This bill actually increases the time that these records will be kept," Beck said.