Brady in bunches: Hogs’ 1B breaks out with RBI cluster 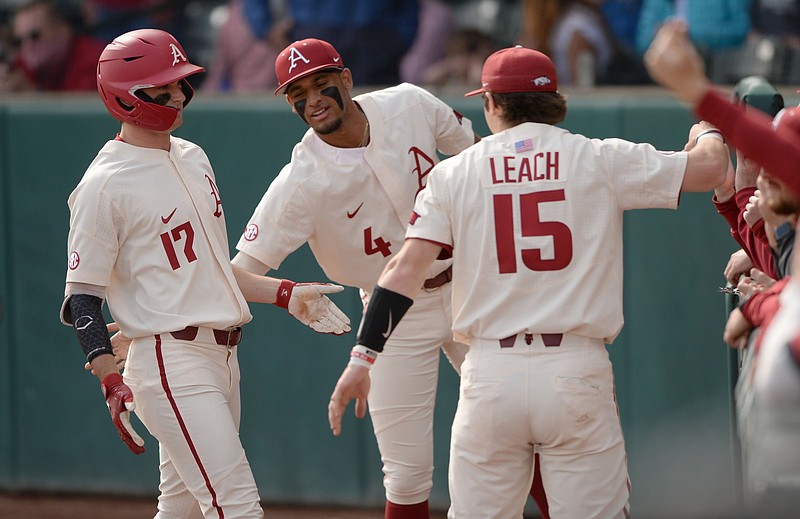 Arkansas first baseman Brady Slavens (17) is congratulated by teammates Dylan Leach (15) and Jalen Battles after hitting a three-run home run in the first inning of the Razorbacks’ victory over UALR on Wednesday at Baum-Walker Stadium in Fayetteville. Slavens was 2 for 5 with 5 RBI. More photos available at arkansasonline.com/48ualrua. (NWA Democrat-Gazette/Andy Shupe)

Slavens, the team RBI leader who had driven in runs in just four of the previous 12 games, notched the first and last of the run-scoring hits for the Hogs against the Trojans (12-13) before a crowd of 4,002 at Baum-Walker Stadium.

He cranked a first-inning home run to straightaway center field and added a two-run single to complete the scoring in the eighth as Arkansas (24-4) swept the two-game set and won for the 12th time in 13 games.

UALR equaled the Razorbacks in hits with eight, but Arkansas cashed in with three home runs to push its season total to 50.

[Video not showing up above? Click here to watch » https://www.youtube.com/watch?v=jx9YM0CUAtE]

Arkansas scored in the first inning of both games against the Trojans and led throughout, a change of pace for a team that had come from behind to win seven times after trailing by three or more runs, twice last weekend against Auburn.

"It's always a good feeling to have the lead, obviously," Arkansas Coach Dave Van Horn said. "It's better than scratching, clawing, trying to come back like we've done so many times this year. But we've learned how to do it and we're pretty good at it. But obviously I'd rather have the lead."

Slavens jolted a 2-2 fastball from UALR starter Cole Evans more than 400 feet over the wall in center field after Robert Moore and Christian Franklin opened the bottom of the first with walks to make it 3-0 from the jump.

UALR Coach Chris Curry said the Trojans pitched Slavens tough on Tuesday, but not as well in the finale.

"Today he was able to get into some good counts," Curry said. "I think we were able to stay left-handed last night against him. Today we had some right-handers in there who got behind in the count and a guy with that kind of power and leverage, he's going to drive the ball."

"He was on a pretty good roll there for a while and then that disappeared," Van Horn said. "That's kind of how the game works. Obviously he's a middle-of-the-order hitter and for him to drive in runs is definitely going to help us win games."

Slavens' home run was his team-high tying seventh, but his first in 17 days since a shot against Alabama's Antoine Jean on March 21.

Evans wound up striking out the side but not before Charlie Welch launched a sky-high shot to left field that the wind helped lift beyond the bullpen for his third home run and a 4-0 lead.

The score remained that way until Moore lifted a shot over the wall in right field against Luke Wallner, who pitched well otherwise, in the fourth inning. That was Moore's sixth home run and the first run given up by Wallner this season.

Caleb Bolden (1-0) allowed 6 base runners in his 4 innings on 4 hits and 2 walks, but the right-hander wiggled out of trouble in three of his innings, did not allow a run and notched the win.

In the fourth, Arkansas pitching coach Matt Hobbs visited Bolden after Noah Dickerson singled with one out and Kenny Rodriguez walked on four pitches.

"We needed a little timeout right there," Van Horn said. "Relax. Start over. Catch his breath and attack instead of nibbling. Just go get them. Make them earn it. We've got the lead, you know? Let's go at them."

The Trojans got on the board against righty reliever Evan Gray in the fifth after nine-hole hitter Eldrige Figueroa led off with a walk. Nathan Lyons followed with a single, and both runners moved up on a wild pitch. That allowed consecutive ground-ball outs by Jorden Hussein and Tyler Williams to drive in runs and cut the deficit to 5-2.

Lyons, a junior from Bentonville, had a high-action day. He went 2 for 3 with a home run, 2 runs scored and 1 RBI from the leadoff spot. But he was thrown out at second after reaching base in his first two plate appearances.

Catcher Dylan Leach gunned him out on a steal attempt in the first inning. In the third, Lyons appeared to lose track of the outs and ran from second base on Williams' one-out liner to center field. Franklin made the catch and doubled him off second. Lyons also had a pair of strong defensive plays at third base.

The early innings featured one defensive collision and nearly another due to the gusting winds. Hussein, the UALR second baseman, held on to Slavens' high pop in right field after bumping into the right fielder Rodriguez. In the first inning, Arkansas right fielder Cayden Wallace came in to catch Hussein's high pop and nearly ran into the second baseman Moore, who had ranged well into the outfield to try to make the play.

The Razorbacks travel to No. 3 Ole Miss this weekend, while the Trojans play host to South Alabama in Sun Belt play.

WHEN 6 p.m. Central on Friday

UALR reliever Luke Wallner stretched his season-opening streak without allowing a run to 7 2/3 innings with 2 2/3 inning of scoreless relief before Robert Moore touched him for a solo home run in the fourth, lifting his ERA to 1.12. … Arkansas DH Charlie Welch hit his third HR, a towering fly ball to left field in the first inning, in his 16th AB of the year. … Arkansas C Dylan Leach threw out Nathan Lyons on a stolen base attempt in the first, Leach’s third runner caught stealing in six tries. … Arkansas OF Cayden Wallace’s 11-game hitting streak was snapped with an 0 for 5 game. … UALR OF Tyler Williams had his streak of reaching base in all 24 games this season come to an end with an 0 for 4 day. … Arkansas starter Caleb Bolden snared a hot shot up the middle behind his back and near his right knee off the bat of John Michael Russ to open the fourth. … Arkansas RHP Heston Tole, who got through the ninth on six pitches, was the 21st UA pitcher of the season. 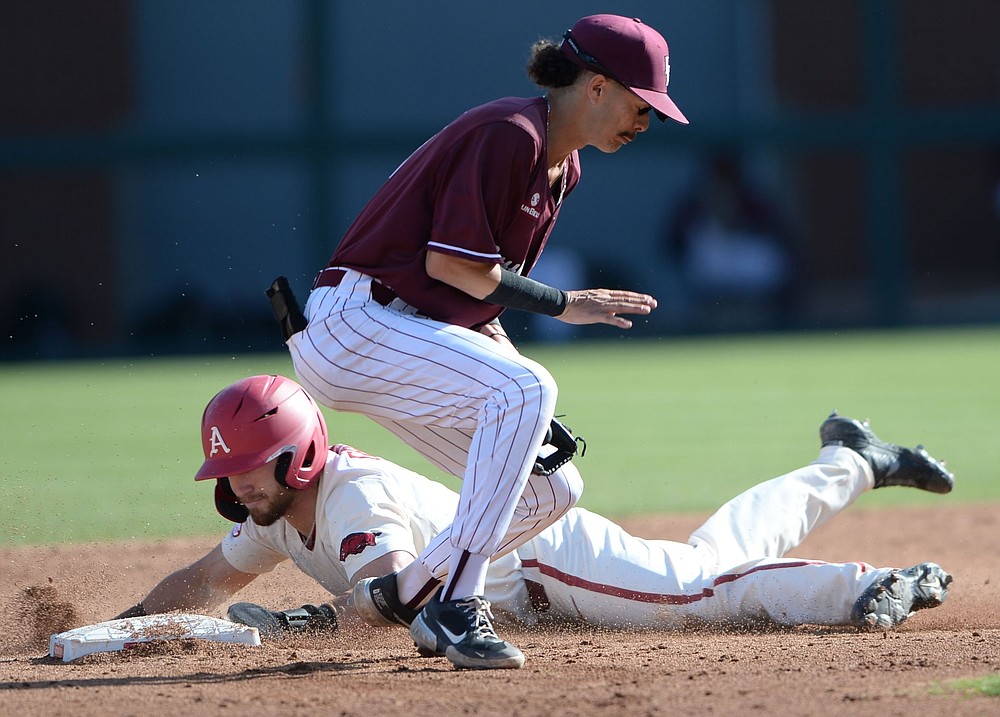