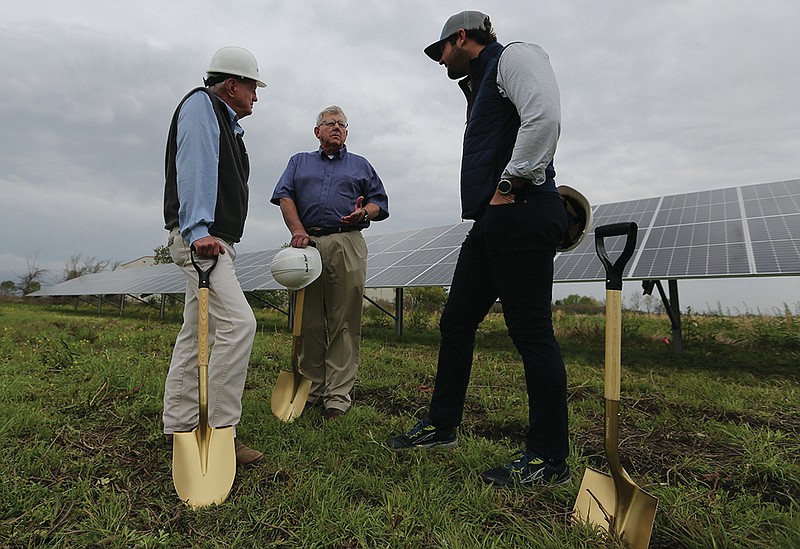 England Mayor Butch House (center) talks with Delta Solar CEO Bob East (left) and Tyler Wilson, also of Delta Solar, after the ceremonial groundbreaking for the city's new solar array on Wednesday, April 7, 2021, in England. Due to weather the solar panels were put up earlier in the week, and should be in service in 3-4 weeks. (Arkansas Democrat-Gazette/Thomas Metthe)

ENGLAND -- Mayor Butch House and Delta Solar announced Wednesday afternoon that England has joined several cities around the state in investing in solar arrays, but it's pioneering a new model of doing so.

England provided Little Rock-based Delta Solar with 12 acres of land that can't be developed, in exchange for a 37-kilowatt solar array that will supply enough electricity to power the courthouse and parks system while saving the city between $4,000 and $5,000 annually, House said.

The already-installed solar array has a retail value of about $64,000 and should be in service in three to four weeks, Bob East of Delta Solar said. The company will maintain the system.

The land is just off Arkansas 165. Delta Solar's land can accommodate over 2 megawatts of solar power, and East said the company plans to use it for storage, staging projects and arrays for commercial, industrial and agricultural customers around the state.

The city fielded several offers from different solar companies, but House said owning the system outright in exchange for land, rather than entering into a long-term power purchase agreement, made the most sense for England.

"When looking at how others are approaching solar, it became obvious that we wanted to own our system and not rely on projected increases in electric rates," he said. "As they add panels to their project, we can either sell the land or we convert it into more solar panels for our city."

While the partnership can be expanded, the current array will provide an estimated $174,000 in savings over the project's 30-year expected life.

Other Arkansas cities -- such as Clarksville, Hot Springs, Forrest City, Fayetteville and Stuttgart -- are also benefiting from solar but under agreements to purchase the electricity that company-owned arrays generate for a certain number of years (usually 20 or more).

Hot Springs' 2019 contract with Scenic Hill Solar, for example, has a 28-year term with an optional two-year extension, but the city also has the option to buy the 12.75-megawatt DC solar plant from Scenic Hill after six years for $15.9 million or fair market value, whichever is greater. The city is expected to save $30 million over the course of the contract, the Hot Springs Sentinel Record reported in 2019.

England's setup is smaller in comparison and did not meet the 1,000-kilowatt threshold at which a facility must seek Public Service Commission approval.

Cities and individuals with solar power can also benefit from selling unused power back to their utility for the same price that the utility charges them for power. However, legislation before the Arkansas General Assembly could change this price to wholesale, if enacted.

"It would have a severe effect, making solar not as financially attractive," East said, a view shared by residents with solar power and with clean energy advocate groups.

Proponents of the bill argue the current retail rate for net metering is more than utilities would pay if they were getting the power elsewhere. This forces non-solar customers to pay more, and that cost burden will become more significant as solar continues to grow, said Rep. Lanny Fite, R-Benton, who is sponsoring the bill.

Arkansas has a small but increasing amount of solar power, which accounted for about 0.6% of the state's electricity generation in 2019 and increased almost eightfold from 2016, according to a March 2020 analysis by the U.S. Energy Information Administration.

In 2020, 3,872 additional solar installations with a total energy-generating capacity of 78,976 kilowatts was added across the state, according to Public Service Commission estimates based on the annual utility reports filed last month. About 94% of those 2020 installations were residential.