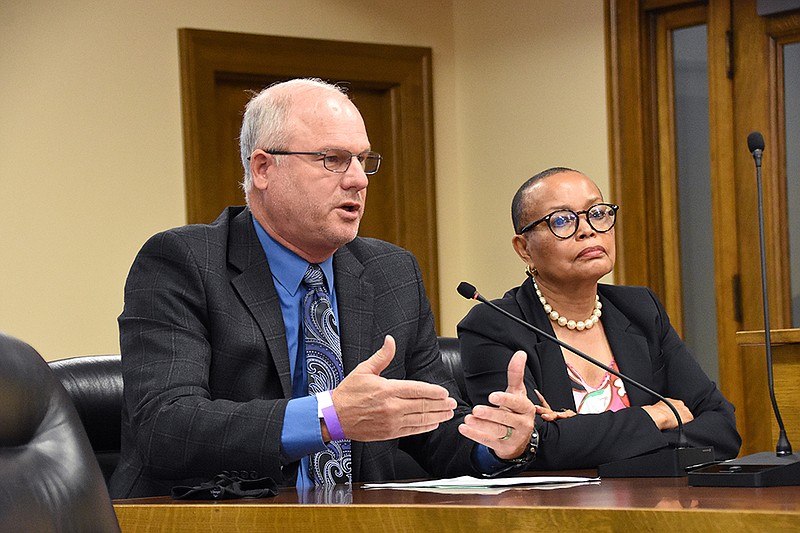 Legislation that its sponsor has called "a class-protection bill" cleared the Arkansas Senate on Wednesday afternoon, after a competing hate crimes bill failed to clear the Senate Judiciary Committee in the morning.

House Speaker Matthew Shepherd, R-El Dorado, who is the House sponsor of the bill, plans to present it to the House Judiciary Committee this afternoon, House spokeswoman Cecillea Pond-Mayo said.

Later, Gov. Asa Hutchinson said, "I support SB622, and I am pleased with the passage in the Senate. I do hope that there will be bipartisan support in the House."

Twenty-one Republican senators and Sen. Jim Hendren, an independent from Sulphur Springs who is Hutchinson's nephew, voted for the bill Wednesday.

SB622 differs from previously proposed hate crimes bills in that it does not list specific protected classes -- such as race, sex, gender identity and sexual orientation -- but rather gives broad sets of characteristics that could define a protected group.

Under the bill, prosecutors could seek longer prison terms for certain violent crimes in which victims are targeted based on their inclusion in an identifiable group or class that shares "mental, physical, biological, cultural, political, or religious beliefs or characteristics."

SB622 would apply to several violent felony crimes -- including murder, battery, aggravated assault, terroristic threatening, a terroristic act and unlawful discharge of a firearm from a vehicle.

Any officer or any person who knowingly brings or aids or encourages another person to bring a frivolous, groundless or malicious prosecution seeking to subject a person to delayed release upon conviction would be guilty of a Class C felony under the bill. Under the fill, the delayed release would mean that a person who receives a sentence of imprisonment is not eligible for parole unless the person has served at least 80% of his sentence.

The bill would require the Arkansas Crime Information Center to maintain a registry of all sentencing orders that include delayed release.

SB622 states that it would not interfere with the exercise of rights protected by the U.S. Constitution or Arkansas Constitution, including the right of clergy to express religious beliefs during a religious service or ceremony; would not serve as a basis to create a protected classification or prohibit discrimination under the Intrastate Commerce Improvement Act; and would not expand or contract the protections under the Arkansas Civil Rights Act of 1993. The bill states that it "shall not be altered, broadened or narrowed through federal or state executive action."

Hickey told senators, "I know there is a lot of feelings going on with this. I really do, and I understand it, both sides.

"We are about to change the criminal code, if we do this, and this will put this in place and whatever group that you want to think of in your mind right now, this will allow the prosecutor to look at that, have that tool in their toolbox to be able to bring the charge to keep those type of perpetrators locked up" for at least 80% of their sentence.

His comments came after Democratic Sens. Joyce Elliott and Linda Chesterfield, both of Little Rock, urged colleagues to vote against the bill.

Chesterfield said the bill is a "placebo."

SB622 "is the dose of medicine, as far as I am concerned, is insufficient and I would appreciate a no," she said.

Elliott said, "I know that this state, like most other states, needs to have a hate crime bill. I am sorry we have not managed to do that," she said. "I don't know what it is about naming things that have to do with people's identity.

"We are just covering up what the real issues are," she continued. "There are people out there who know their truth, and they know that this bill doesn't make more of them because we don't honor them enough to even name who they are."

Rapert told senators that he struggled with the bill.

He praised Hickey and other lawmakers who worked on the bill "for trying to do what is more fair."

Rapert said a person who identified himself as a militant LGBT member and a member of Antifa sent Rapert a message wishing to see him dead.

The senator said the message also said there were "so many organizations and freedom-fighting groups ready to take you down," and "you have no idea how serious we are."

"Is that hate? I'd say that is hate," Rapert said. "That wrong is wrong. That is wrong to send to anybody."

Hutchinson, who has been governor since 2015, started calling for adoption of an Arkansas hate crimes law in 2019 and made such an effort one of his priorities for this year's legislative session.

The Arkansas State Chamber of Commerce and major businesses such as Tyson Foods have endorsed the bill, but the Family Council, a faith-based advocacy group that has steadfastly opposed past efforts at enacting a hate crimes bill, has opposed the measure.

Groups including the Anti-Defamation League, the Human Rights Campaign and the Urban League of Arkansas have all opposed SB622 for failing to specify which classes of people would be protected.

On Wednesday morning, proponents of their version of hate crimes legislation went before the Senate Judiciary Committee with what they described as a full-throated measure to address targeted attacks on racial minorities and LGBTQ Arkansans. They were rebuffed by the committee.

Members of the committee -- who had advanced SB622 earlier -- were largely seen as hostile to the competing measure, Senate Bill 3 by Hendren.

Hendren presented the bill anyway, citing the work by other lawmakers and advocates to enact targeted hate crimes legislation in the state dating as far back as 2003.

"Something that someone's been working on for decades deserves to be heard," Hendren said. "People who are most impacted by hate crimes deserve to be heard."

The sponsor of similar legislation during her first term in the House two decades ago, Elliott said her earlier effort was defeated over opposition from clergy members who asked her to remove protections for sexual orientation. She refused to do so then and called on lawmakers specifically to include such protections in 2021 because of the history of violence against LGBTQ people.

Members of the committee who opposed the bill, however, criticized the scope of the measure.

Sen. Bob Ballinger, R-Ozark, brought up instances of conservatives being attacked in public while wearing MAGA hats to point out that Hendren's bill did not include political affiliation as one of its protected categories.

Hendren responded by saying he would support an amendment to the bill to include that class.

"If we're going to have a bill that targets hate, shouldn't we go after everyone?" Ballinger asked.

Hendren's bill died in committee Wednesday when no one on the committee joined him to vote for the measure.

Sen. Trent Garner, R-El Dorado, then made a procedural motion to limit the chances of the bill being resurrected, a move Hendren called "petty."

Ballinger, who seconded Garner's motion, responded back "this whole process has been petty," and accused Hendren of seeking publicity instead of working with Republicans to draft a compromise bill. Hendren left the Republican Party to become an independent in February.

The vote on Garner's motion failed, but Hendren said Wednesday that he had no plans to present the bill for another vote. 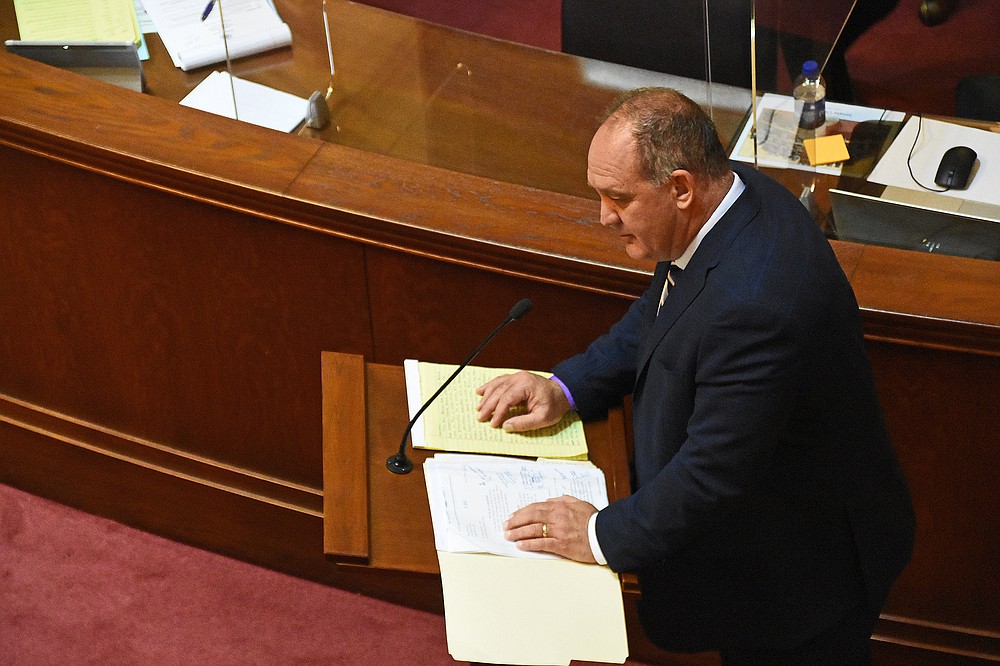 “I know there is a lot of feelings going on with this. I really do and I understand it, both sides,” Senate President Pro Tempore Jimmy Hickey told Senate colleagues Wednesday as he presented his hate crimes bill. Democratic Sens. Joyce Elliott and Linda Chesterfield urged the bill’s defeat, with Chesterfield calling it a “placebo” and Elliott saying “We are just covering up what the real issues are.” (Arkansas Democrat-Gazette/Staci Vandagriff) 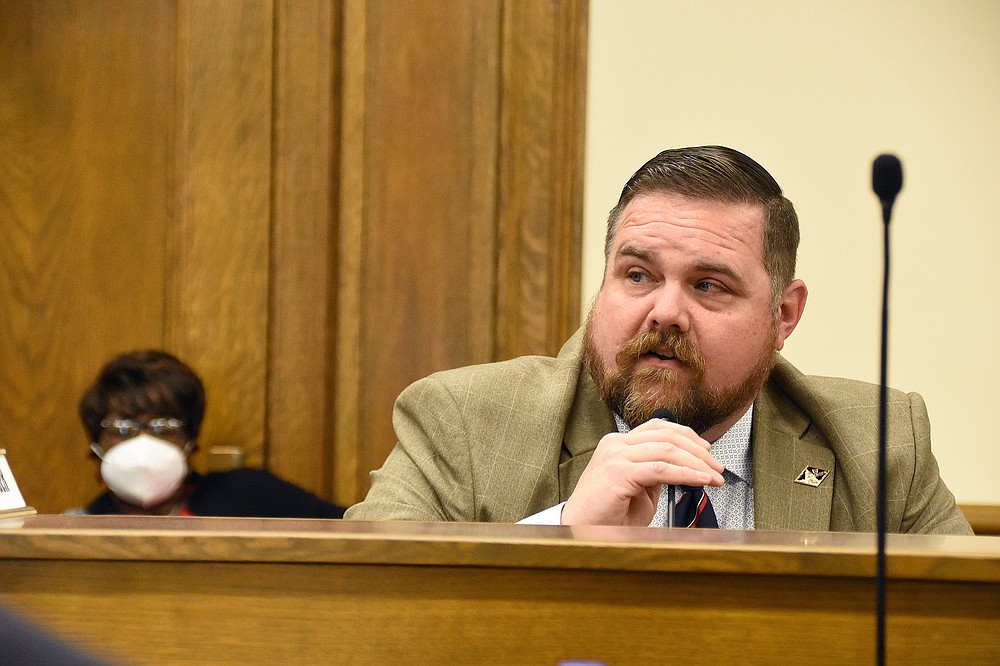 Sen. Bob Ballinger spoke against Senate Bill 3, the alternative hate crimes bill presented Wednesday by Sen. Jim Hendren and joined a failed motion to limit its chances of being reintroduced. Hendren called the move petty, to which Ballinger responded that “this whole process has been petty.” (Arkansas Democrat-Gazette/Staci Vandagriff)
ADVERTISEMENT