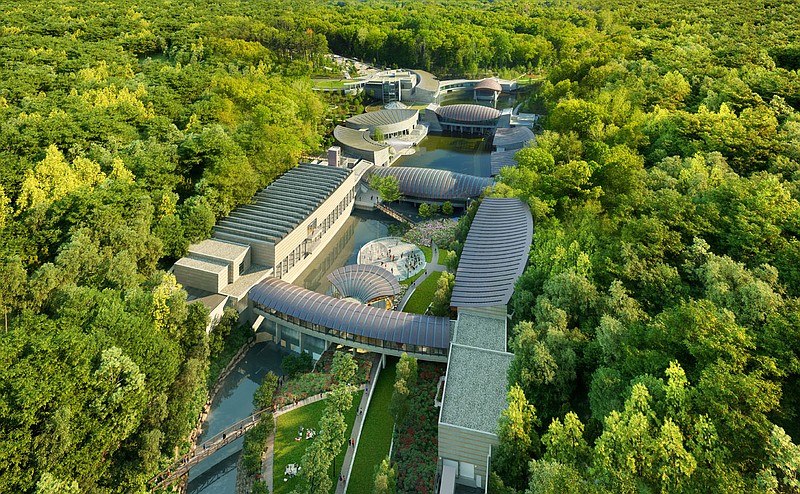 This artist’s rendering, an aerial view looking south, shows the planned 100,000-square-foot expansion of Crystal Bridges Museum of American Art in Bentonville. The project will increase gallery space by 65% and provide education and studio areas, another cafe and “spaces for refl ection and gathering.” (Special to the Democrat-Gazette)

Crystal Bridges Museum of American Art, the Bentonville museum founded and largely funded by Walmart heiress Alice Walton, has planned an expansion to house its growing collection and provide more space for programs and events.

The expansion will add 100,000 square feet to the existing 200,000 square feet of space, museum officials said in a news release Wednesday. It will be designed by Safdie Architects, the firm led by Moshe Safdie, the designer of Crystal Bridges' original structure.

The project is currently in the design development phase, and construction is expected to start in early 2022 and be completed in 2024. Safdie Architects is also designing a reconfigured main lobby and courtyard that will be finished in May.

The museum did not say how much the expansion will cost, just as it remained quiet on the price tag for the initial facility. However, the Walton Family Foundation alone has donated more than $1 billion to the museum, according to the CALS Encyclopedia of Arkansas.

"It's wonderful to see our community, our region and travelers to Bentonville from across the nation and around the world have embraced Crystal Bridges, and enjoyed the experience of being surrounded by art, nestled in nature, and immersed in Moshe Safdie's architecture," said Walton, who serves as chairwoman of the museum's board of directors.

"With the number of visitors we welcome annually, it's time to enlarge our building and make sure more people can access these offerings," Walton said.

Crystal Bridges, which opened Nov. 11, 2011, has since seen more than 5 million visitors.

Nelson Peacock, the Northwest Arkansas Council's president and chief executive officer, said that in the 10 years the museum has been open, "Crystal Bridges has catalyzed economic development in Northwest Arkansas by transforming the region into a destination for tourism and enhancing the quality of life for our residents."

"The museum's expansion will open opportunities for artists and creatives and provide access to more world-class art in our community," Peacock said.

A larger museum can also translate into a greater impact on tourism, said Mervin Jebaraj, director of the University of Arkansas' Center for Business and Economic Research.

Crystal Bridges is already an amenity for visitors, offering plenty to see and do. With the expansion, Jebaraj said, tourists are more likely to stay longer to take it all in. And the longer they're in Northwest Arkansas, the more money they will spend at hotels, restaurants and other businesses.

An expanded museum displaying a larger collection will bring even more national attention to the region, Jebaraj said. That can help bring more businesses to the area, and also help companies with recruiting efforts, he said.

"You have to make less of an introduction to Northwest Arkansas because many people will have already heard of it," Jebaraj said.

The new construction will complement the museum's existing design -- a grouping of interconnected copper-covered pavilions tucked into a ravine and appearing to float on ponds fed by a natural spring.

With an additional 65% of gallery space, the museum can display more of its permanent collection. Initially consisting of about 1,500 artworks, the collection has more than doubled since the museum's opening.

The galleries also house about three temporary exhibitions each year that are often augmented by loaned works.

Interior and exterior connections will link the galleries, program spaces and the museum's surrounding parks and trails. As with the existing structure, the addition will use regionally sourced materials such as timber and fieldstone.

Other features will include more educational areas and one floor just for community gatherings, art studios and maker spaces. Also, a bridge connecting two galleries will have a cafe and "spaces for reflection and gathering," the release stated.

In addition, there will be a circular event plaza that can be used for outdoor programs and performances.

Crystal Bridges and Safdie Architects are working with Coen+Partners Landscape Architects to create other outdoor spaces and enhancements to the existing network of trails. The museum currently has 5 miles of sculpture-dotted trails on its 120-acre campus.

Hight Jackson will serve as the associate architect; BuroHappold Engineering as structural and facade engineers; CEI Engineers as civil engineers; LAM Lighting and Design as lighting consultants; and Flintco LLC as the contractor. 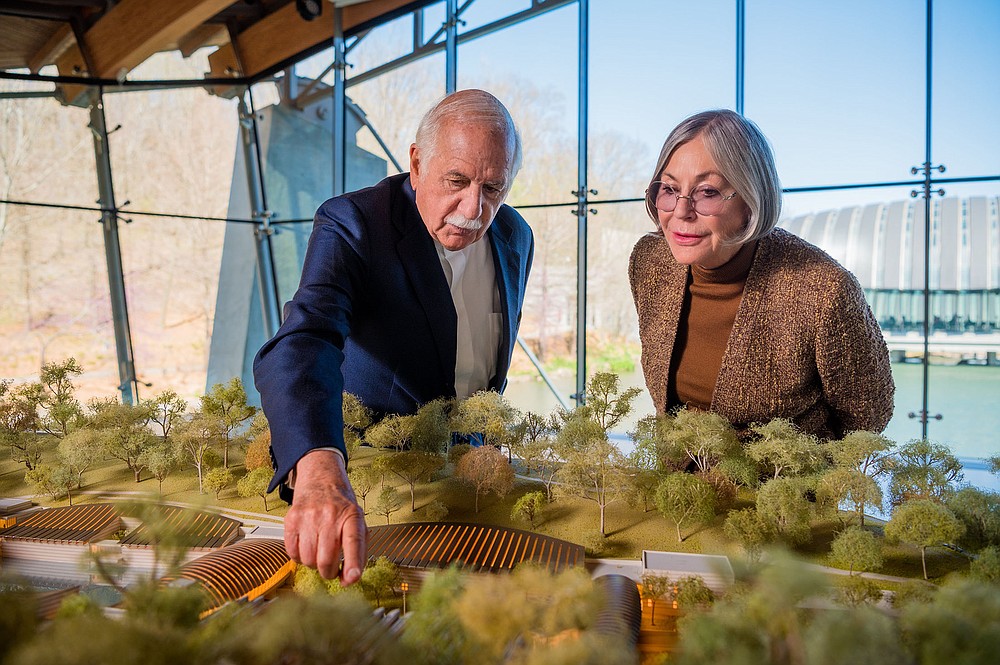 Architect Moshe Safdie and Alice Walton, founder of the Crystal Bridges Museum of American Art, look over the diorama of a planned expansion of the museum Wednesday in Bentonville. Safdie’s firm is designing the addition. (Special to the Arkansas Democrat-Gazette) 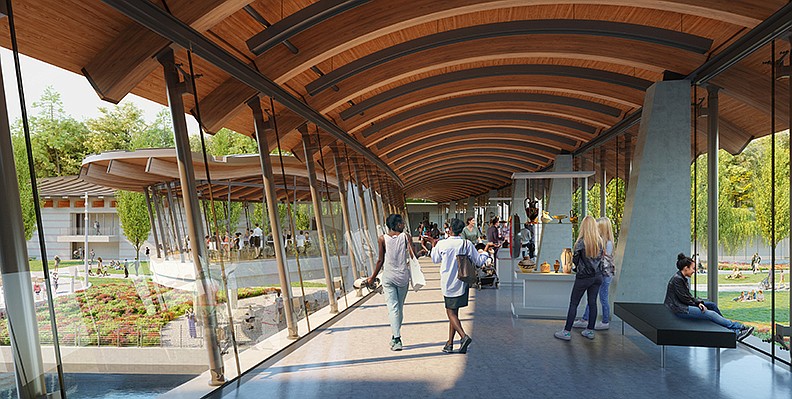 An artist’s rendering depicts the new bridge connecting the current and future galleries at the Crystal Bridges museum. (Special to the Arkansas Democrat-Gazette)
ADVERTISEMENT