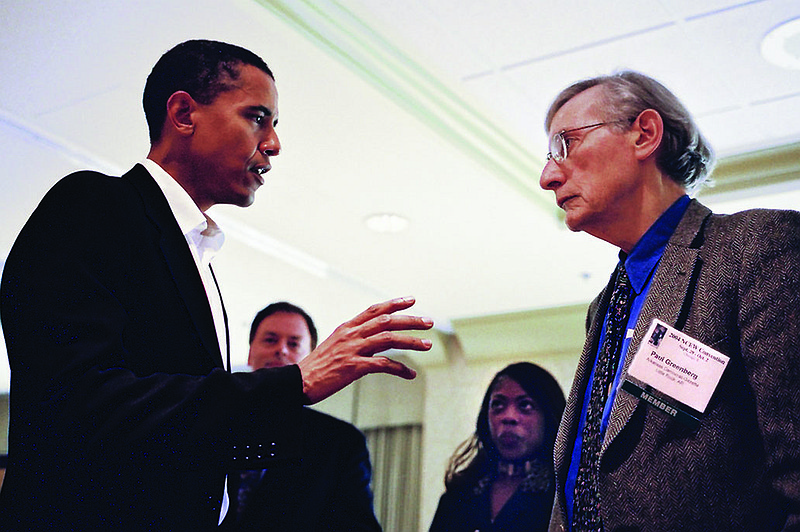 Then-Illinois state Sen. Barack Obama talks in 2004 with Paul Greenberg, who at the time was the editorial page editor for the Arkansas Democrat-Gazette. Before joining the statewide newspaper, Greenberg held the same position at the Pine Bluff Commercial for 30 years. The two were at the National Conference of Editorial Writers meeting held in Chicago where Obama gave a speech during his campaign for U.S. Senate. (Arkansas Democrat-Gazette file photo)

Paul Greenberg irritated readers who opposed his views on civil rights as an editorial page editor at the Pine Bluff Commercial, according to one of his colleagues.

"He fell out of favor because he spoke out about the segregation issue and readers thought he was just playing liberal, but he wasn't. He was just doing what was right," said John Henry, a former news and managing editor at The Commercial. "He was very smart. He was really a very conservative person."

Greenberg's columns on local civil-rights issues in 1968 earned him a 1969 Pulitzer Prize for editorial writing and was the highlight of his 30-year run at the newspaper. The Pulitzer is the highest award for literary work in the United States.

"He is a word craftsman," said Henry, who last worked at The Commercial in 1997. "You couldn't ask for a better writer. I got to the paper after he won the Pulitzer Prize. He loved it. I'm surprised he worked as long as he did. He loved it so much, he couldn't give it up."

Greenberg, who went on to craft other thought-provoking editorials at the Arkansas Democrat-Gazette, died Tuesday. He was 84.

Born in Shreveport in 1937, Greenberg was first hired at The Commercial in 1962 as editorial page editor, and he left in 1992 for the same role at the Democrat-Gazette. He continued to write editorials at the Little Rock newspaper until 2018.

Ed Freeman was the publisher who hired Greenberg in Pine Bluff.

"My previous editorial page editor was a very talented man by the name of Pat Owens," Freeman said. "During his tenure with me, the first year, he won four national awards, I think it was, one of which was for a nine-month fellowship at Harvard. That led me to a situation where I needed a new editorial page editor and didn't have one in mind.

"My recollection is that we had run an ad for editorial page editor in the Pine Bluff Commercial. We ended up offering [Greenberg] a job during that period during the time Pat Owens would be gone. He needed the job, and he accepted it. By the time Pat Owens got back from Harvard, Paul had shown me high-quality work by himself, and we asked him to stay for some time afterward."

Greenberg detailed the climate of race relations in his award-winning collection of editorials, taking a position many Pine Bluff residents were not yet comfortable with at a time when America would mourn the death of civil-rights leader Martin Luther King Jr. Many of his pieces detailed recommendations of the mayor's committee on race relations.

"It is unfortunate that, after all these years, the principle of treating others as one would like to be treated has to be put forward as a recommendation by members of a mayor's committee. That's the sort of simple principle you'd hope people had picked up in Sunday School," Greenberg wrote in one editorial entered into the Pulitzer contest.

In a piece endorsing the Rev. Isaac Tate, a Black candidate for alderman in the Second Ward, Greenberg wrote:

"Isaac Tate would give race relations a high priority in any listing of the city's concerns, which is the rank that topic ought to have. Being a Negro, Reverend Tate would bring to the council a rapport with some 40 per cent of Pine Bluff's population. His very presence on the City Council would testify to the city's sense of fairness and concern."

The Pulitzer Prize brought unusual nationwide attention to a small Southern newspaper that tended to be on the conservative side, Freeman said. His family owned The Commercial until it was sold to Donrey Media Group in 1986.

Greenberg wanted to share with Freeman the news about his award, but he left Freeman's office once he saw there was a visitor, Freeman recounted.

"After a while, there was no one in my office, and Paul got back in," Freeman said. "He said, 'I just wanted to tell you I've been informed I just won a Pulitzer Prize.' He didn't want to interfere with anything, but that struck me at that time and continues to do so."

Henry described Greenberg as a perfectionist.

"Many times, his page was the last one I'd get out because I'd have to make so many corrections," Henry said. "It worried him to death because he was constantly making changes. He was a doggone good writer. A lot of times, he had people work strictly with him. We'd call them Paul-bearers because they had to endure a lot of changes with him."

Aside from Greenberg being an accomplished writer, former colleagues remembered him as a social butterfly who had a knack for making them feel comfortable around him.

"I was so young when I met Paul; I was not yet 21 when I came to the Pine Bluff Commercial newsroom," said Gwen Moritz, the Arkansas Business editor who worked at The Commercial from 1982-88. "My nickname was Sheena Innocence. I took up drinking coffee. I had never been a coffee drinker until I got to The Commercial -- it was an afternoon paper -- after deadline in the morning. Everyone would take a coffee break. I didn't know it was a thing. Paul would be drinking coffee. I would drink coffee so I'd have an excuse to sit at the coffee table with him.

"I never worked on the editorial page with Paul, but we got to be friends. It was a small town and a pretty friendly newsroom."

Commercial Editor Byron Tate worked with Greenberg from 1986-90 and called him an inspiration to everyone in the newsroom.

"We were all young and wanted to change the world, and there was Paul, driving a Miata and arriving to work at a leisurely 10 a.m., and from our perspective, he not only changed the world every day but he did it with a swagger," Tate said. "Politicians, business leaders, school superintendents, you name it, would parade through his office hoping to get a good remark or two on the editorial page. Then the TV and radio reporters would set up shop outside his office for interviews. Those were some heady days. His powerful voice was revered by all."

"The powers that be were aware of him," said Coley, who worked at the newspaper from 1977-92. "He was just a regular guy. I would go have coffee with him in the afternoon."

Greenberg was a teacher at heart who loved his work and his family and told short stories about his household, said Donna Mooney, a general assignment reporter in the 1990s.

"Even after he left, I enjoyed reading him, and I would look for him in the Democrat-Gazette," Mooney said. "He knew what Pine Bluff was really about. Very seldom did I hear him rant and rave. He looked at everything with a fair eye; at least that's what I thought. He would look at all sides, not just one side. Even then, I received knowledge that you allow the people to form a conclusion once you put the information out there."

Kim Jones Sneed arrived at The Commercial as a reporter in the late 1980s and then became business editor before becoming a freelancer.

"It was kind of neat the way the office was laid out," Sneed said. "You could see Paul from the newsroom because it was a glass window. Often, he had his door open. Warm, humble, made us feel comfortable, and he was approachable to talk with on a few things. I don't know why the words 'gentle giant' come to mind."

"Humble" and "down to earth" were among the terms Sneed used to describe Greenberg despite all of his accomplishments, which she said she was unaware of because of his character.

"It was really kind of an opportunity to be around someone who was a true master of his craft," Sneed said. "To think you're among a person who has won a Pulitzer, he comes to work every day, works hard just like us, works on stories just like us and offers us inspiration through his pieces." 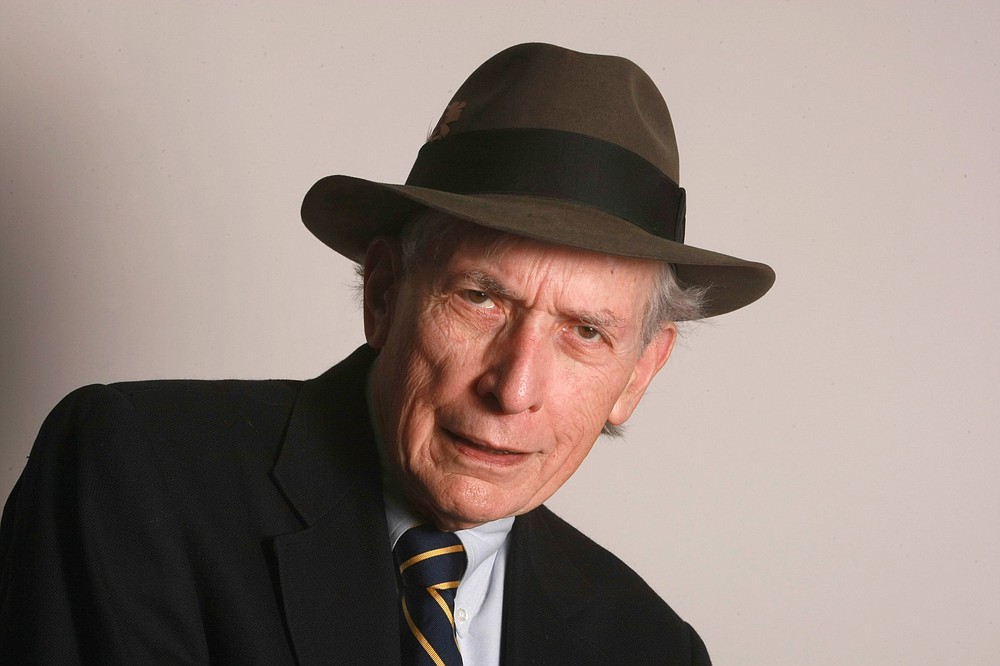