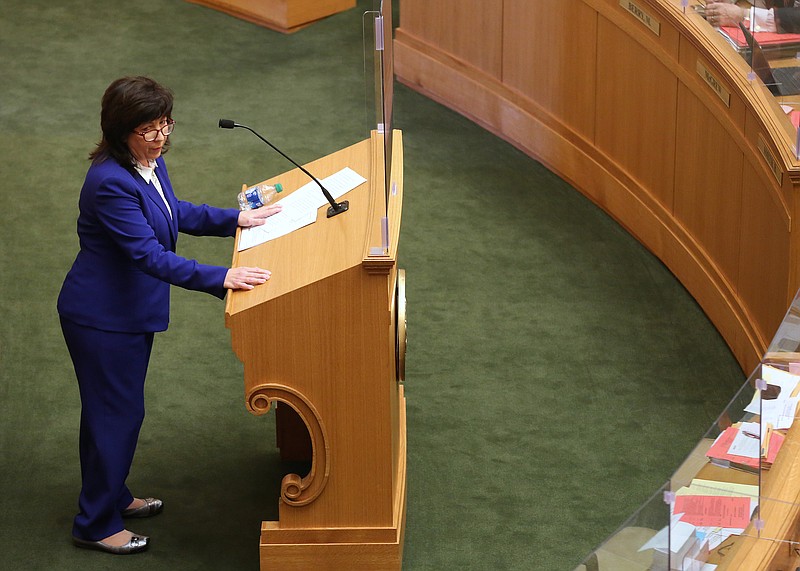 Rep. Mary Bentley, R-Perryville, presents SB-6, a bill to abolish abortion in Arkansas, during the House session on Wednesday, March 3, 2021, at the state Capitol in Little Rock. .More photos at www.arkansasonline.com/34bill/.(Arkansas Democrat-Gazette/Thomas Metthe)

A bill to allow public schools to teach intelligent design as a theory of how the Earth came to be gained the approval of the Arkansas House on Wednesday, despite a 1980s court ruling that bars schools from teaching creationism in science classes.

The legislation would apply to kindergarten-through-12th-grade public and charter schools.

Bentley said permission to teach creation is something she's had teachers ask her for since she became a lawmaker.

"Scientists have been on both sides of the issue for thousands of years," she said, noting that Isaac Newton and Galileo believed in "God and biblical creation."

Bentley said the decision stemmed from the lawsuit over Act 590 of 1981. The law mandated that the state "give balanced treatment to creation science and evolution-science." U.S. District Judge William R. Overton ruled in 1982 that the law was unconstitutional and that creation shouldn't be part of a science curriculum.

"Arkansas was really the beginning of not allowing creation to be taught in the classroom, so I thought it was important for us to make this first step," Bentley said.

Bentley added that she would be happy to add creation to the state's academic standards later on. Godfrey, a former educator, had said in committee Tuesday that blanket permission, without context or specifics, is unhelpful to teachers.

In addition, the U.S. Supreme Court struck down the state's ban on teaching the theory of evolution in 1968.

"Why would we do this when the Supreme Court has repeatedly ruled that it is illegal to do that?" Ferguson asked.

"We have seen the Supreme Court change their mind 200 times," Bentley replied, noting that the high court's makeup has changed since then.

She said later that prior to the legislative session, she had discussed the bill with the state attorney general's office, which was confident such a law could be successfully defended in court. Bentley said HB1701 is different from the previous laws.

Ferguson said the bill violates the establishment clause of the First Amendment and could open the door for every religion's creation story to be taught as science.

Bentley said classrooms should be open for debate that includes creation among scientific theories.

"I think our students learn more when they discuss it and debate it in the classroom and look at different scientific theories. I think we can look at them and learn from them all. I really do," she said.

"I mean, I think religion and philosophy, but not science," Ferguson replied.

A spokeswoman for Gov. Asa Hutchinson said Wednesday that he had not reviewed the bill.