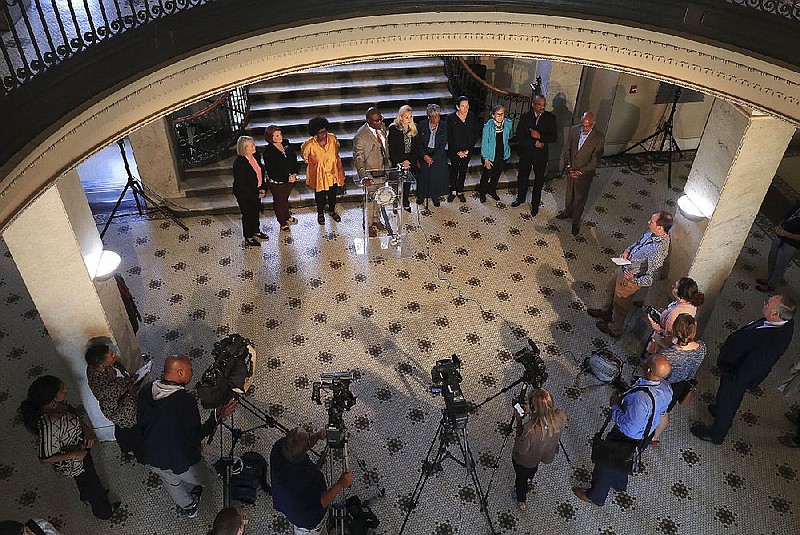 Mayor Frank Scott Jr. (at lectern) is joined by legislators, Arkansas Education Association officials and members of the Little Rock Board of Directors during his news conference at City Hall on Monday, Oct. 7, 2019.

Little Rock Mayor Frank Scott Jr. will seek the approval of the city's Board of Directors to schedule a July special election on his proposed sales-tax increase.

A draft ordinance distributed to members of the Board of Directors during a meeting Tuesday evening would, if approved, call for a July 13 election on whether to raise the city's sales-tax rate by one percentage point.

City directors on Tuesday also were given a separate draft of a resolution that sets the general spending parameters for the estimated $530 million in revenue the city expects to receive as a result of the sales-tax increase during the first 10 years of its lifespan.

According to the draft resolution, the largest share of the money is expected to be used for the category of parks and recreation, golf and fitness, with 34% of the total 10-year revenue, followed by public safety and infrastructure, which are each expected to receive 12% of the funding.

Residents will be presented with a for-or-against ballot question on whether to adopt the tax increase.

Tax collections are scheduled to begin Jan. 1, 2022, should voters approve the tax increase. The increase to the city's sales-tax rate will be permanent.

The mayor's tax increase is scheduled to phase in as another city sales tax is set to expire after a decade.

A three-eighths-cent sales tax used to fund capital projects that was approved in 2011 will expire Dec. 31, and officials have said the city will not seek to renew it.

Because that tax will sunset at the end of the year, if voters approve the one percentage-point increase this summer, Little Rock's local sales-tax rate will increase by five-eighths of a cent.

When state and county sales taxes are factored into the local tax rate, consumers in Little Rock will pay 9.625% on most purchases starting in 2022 if voters approve the mayor's tax increase.

At a news conference last week, Scott compared the current 9% overall sales tax rate in Little Rock with other cities in the region, including Baton Rouge (9.95%), Birmingham, Ala. (10%) and Chattanooga, Tenn. (9.25%).

"And so with this moderate increase of $53 million [annually], based on this one penny, gets us still below most cities in our region," Scott said March 31.

The mayor announced the effort to enact a sales-tax increase during his State of the City virtual broadcast March 25.

Scott proposed a similar sales-tax increase last year, but before he could steer it through the voter-referendum process the worsening coronavirus outbreak led him to drop the proposal in March.

During the board meeting Tuesday evening, Ward 4 City Director Capi Peck asked Scott how constituents can provide input on the tax proposal.

Scott said residents can address feedback to him via email or to city directors. They also have the opportunity to speak about the proposal during the citizen communication portion of meetings.

He added that a number of different community-led processes have helped develop "this very comprehensive plan here today" over the better part of a year and a half.