International talks, Biden’s plans for region at stake in fight for ancient city by JON GAMBRELL AND ISABEL DEBRE THE ASSOCIATED PRESS | April 8, 2021 at 3:47 a.m. 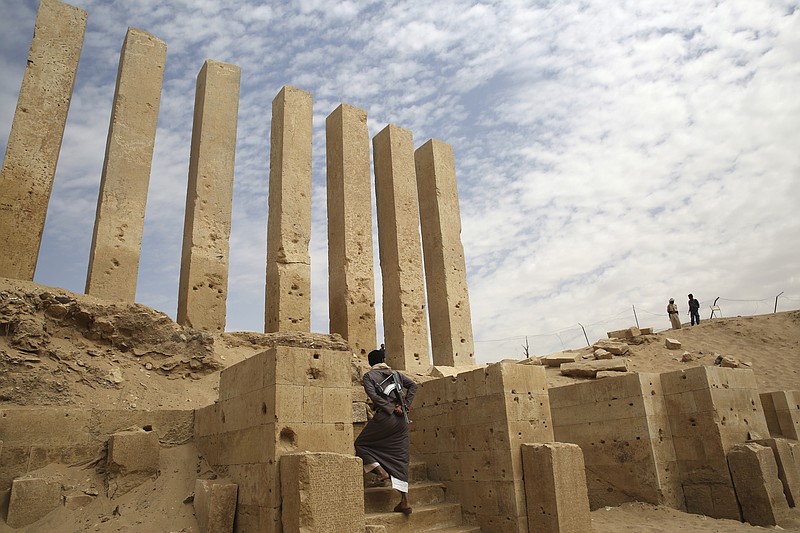 FILE - In this Feb. 3, 2018, file photo, a militiaman allied to Yemen's internationally recognized government walks through the Awwam Temple, also known as the Mahram Bilqis, in Marib, Yemen. The battle for the ancient desert city has become key to understanding wider tensions now inflaming the Middle East and the challenges facing any efforts by President Joe Biden’s administration to shift U.S. troops out of the region. (AP Photo/Jon Gambrell, File)

DUBAI, United Arab Emirates -- The battle for an ancient desert city in war-torn Yemen has become a key to understanding wider tensions now inflaming the Middle East and the challenges facing any efforts by President Joe Biden's administration to shift U.S. troops out of the region.

Fighting has been raging in the mountains outside Marib as Iranian-backed Houthi rebels, who hold Yemen's capital of Sanaa, attempt to seize the city, which is crucial to the country's energy supplies.

Saudi Arabia, which has led a military coalition since 2015 backing Sanaa's exiled government, has launched airstrike after airstrike to blunt the Houthi advance toward Marib. The Houthis have retaliated with drone and missile attacks deep inside Saudi Arabia, roiling global oil markets.

The battle for Marib likely will determine the outline of any political settlement in Yemen's second civil war since the 1990s. If seized by the Houthis, the rebels can press that advantage in negotiations and continue further south. If held, Yemen's internationally recognized government saves perhaps its only stronghold as secessionists challenge its authority elsewhere.

The fight also squeezes a pressure point on the most powerful of America's Gulf Arab allies and ensnarls any U.S. return to Iran's nuclear deal. It even complicates efforts by Biden's administration to slowly shift the longtime mass U.S. military deployments to the Mideast to instead counter what it sees as the emerging threat of China and Russia.

Losing Marib would be "the final bullet in the head of the internationally recognized government," said Abdulghani al-Iryani, a senior researcher at the Sanaa Center for Strategic Studies. "You're looking at a generation of instability and humanitarian crisis. You also will look at a free-for-all theater for regional meddling."

Marib, 75 miles east of Yemen's capital, Sanaa, is now home to over 800,000 refugees fleeing the Houthis, according to the United Nations' refugee agency. The fighting disrupts their access to water, electricity, food and education for their children.

"It was once a rare place in Yemen that enjoyed a degree of security and stability," said Mohsen Nasser al-Mouradi, political activist living near the city. "Now we hear the sounds of heavy weapons all day. We are under constant siege."

For a while, beginning in the fall of 2019, Saudi Arabia reached a detente with the Houthis, said Ahmed Nagi, a non-resident Yemen expert at the Carnegie Middle East Center. Citing two Houthi officials familiar with the discussions, Nagi said a back channel agreement saw both the Saudis and the rebels refrain from attacking populated areas.

But when the Houthis began to push again into Marib, the Saudis resumed a heavy bombing campaign.

For the Houthis, "they think they gain through war more than peace talks," Nagi said. For the Saudis, who increasingly signal they want an end to the conflict, "if they lose Marib, they'll have zero cards on the negotiating table."

Biden early in his term announced the U.S. would halt support for Saudi Arabia's offensive combat operations in Yemen, saying: "This war has to end." He also removed the Houthis from a list of "foreign terrorist organizations."

But fighting around Marib has only escalated. Iran's frustration over the Biden administration's failure to swiftly lift sanctions has contributed to "an intensification of attacks by groups in Iraq, and the same in Yemen," said Aniseh Bassiri Tabrizi, an Iran scholar at Britain's Royal United Services Institute.

While experts debate how much control Iran exerts over the Houthis, the rebels increasingly launch bomb-laden drones previously linked to Tehran deep inside the kingdom.

"The U.S. administration's removal of the Houthis from the [foreign terrorist organization] list, unfortunately, appears to have been misinterpreted by the Houthis," the Saudi government said in a statement. "This misreading of the measure has led them, with support from the Iranian regime, to increase hostilities."

Since the war began, the Houthis have launched over 550 bomb-laden drones and more than 350 ballistic missiles toward Saudi Arabia, the kingdom said. While that has caused damage, injuries and at least one death, the war in Yemen reportedly has seen over 130,000 people killed. Saudi Arabia repeatedly has been criticized internationally for airstrikes killing civilians and embargoes exacerbating hunger in a nation on the brink of famine. 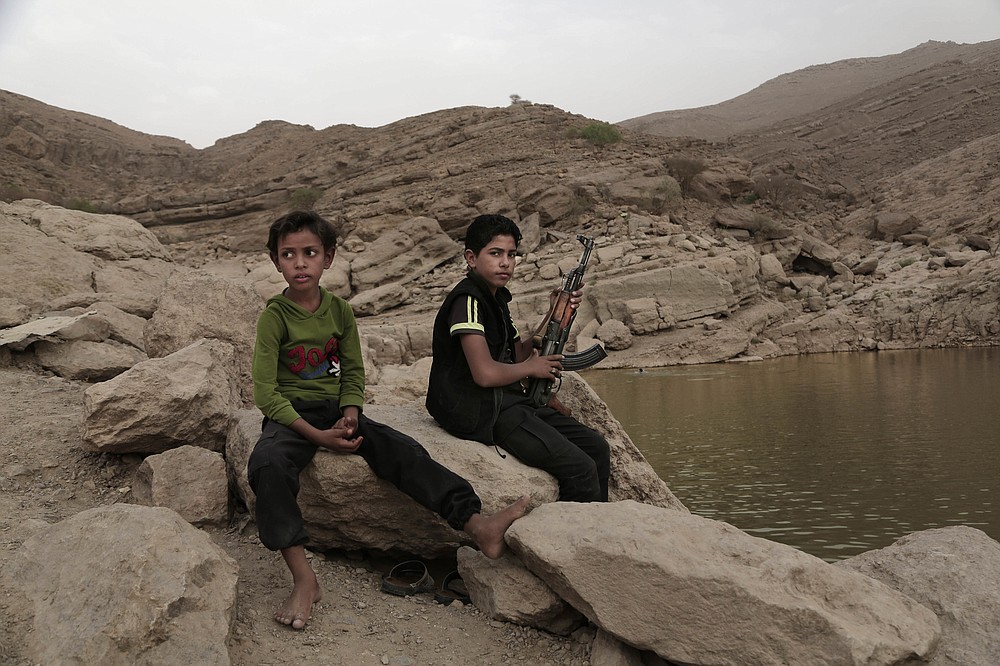 FILE - In this July 30, 2018, file photo, a 17-year-old boy holds his weapon at the dam in Marib, Yemen. The battle for the ancient desert city has become key to understanding wider tensions now inflaming the Middle East and the challenges facing any efforts by President Joe Biden’s administration to shift U.S. troops out of the region. (AP Photo/Nariman El-Mofty, File) 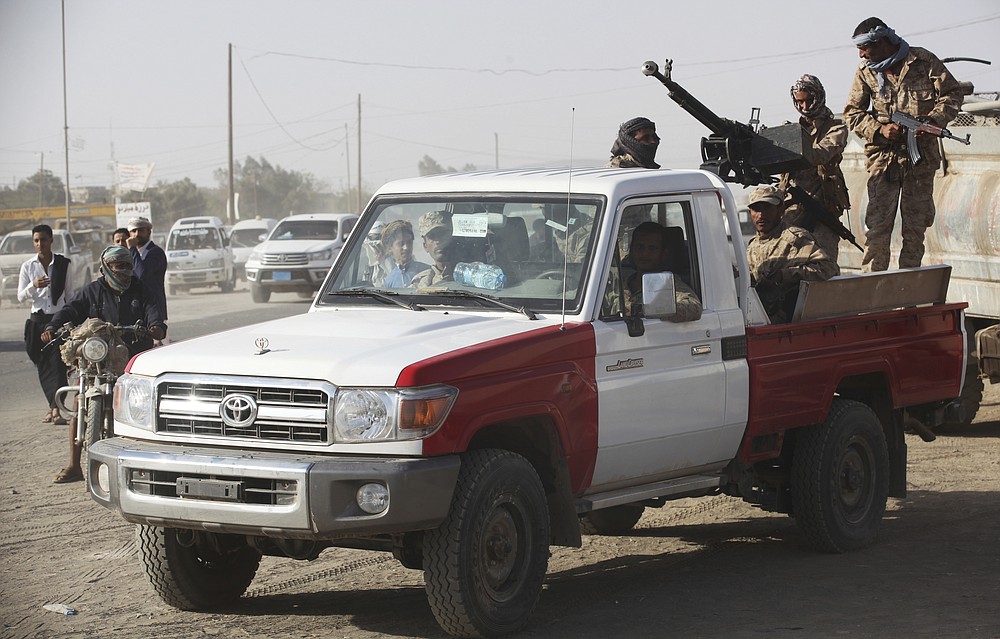 FILE - In this Feb. 2, 2018, file photo, Yemeni soldiers allied to the country's internationally recognized government stand guard in Marib, Yemen. The battle for the ancient desert city has become key to understanding wider tensions now inflaming the Middle East and the challenges facing any efforts by President Joe Biden’s administration to shift U.S. troops out of the region. (AP Photo/Jon Gambrell, File)
ADVERTISEMENT