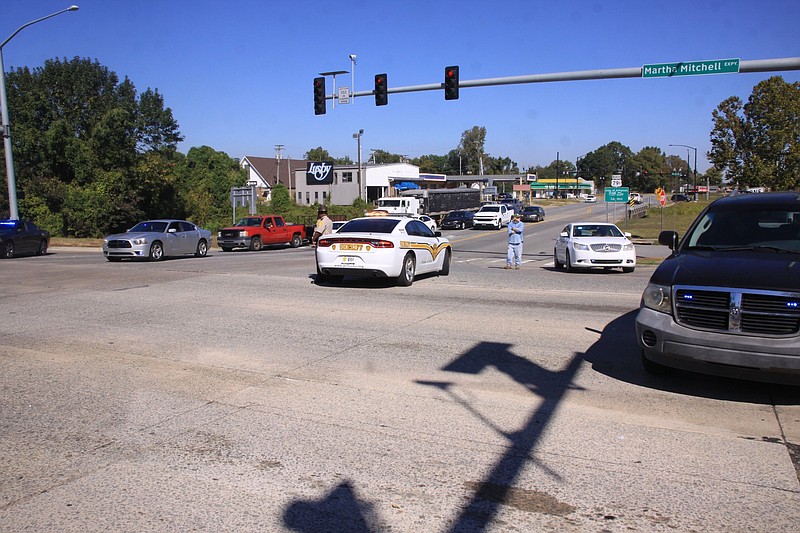 Assistant Police Chief Kelvin Hadley said there will soon be an increase in police presence to combat drag racing and other traffic offenses in the city. (Pine Bluff Commercial/Eplunus Colvin)

Expect to see more aggressive traffic enforcement this weekend after an Easter weekend that kept the short-staffed Pine Bluff Police Department busy responding to drag racing and other traffic offenses.

According to assistant police chief Kelvin Hadley, who spoke at the Public Safety Committee meeting on Wednesday, people were drag racing, spinning their wheels, and doing doughnuts in the park.

Hadley said the police department has partnered with the Jefferson County Sheriff's office and state law enforcement agencies as well as local wrecker businesses to combat the traffic violators, most of whom were from out of town.

"We're doing this to try to get the word out to don't come to Pine Bluff with that aggression," said Hadley. "We are going to be out in full force this weekend and hopefully we can make a difference and curb some of this behavior that has been affecting our community."

Tow trucks are expected to take the vehicles to tow yards as soon as the violators are ticketed.

"What has been happening when we write and cite them, those violators would go ahead and drop the money on the spot to go ahead and get their vehicle," said Hadley. Going forward, however, authorities will inconvenience the violator by towing their car.

In a follow-up interview with the Pine Bluff Commercial, Whitfield said with the nice weather, citizens will start to come out and enjoy it and look for places to congregate, usually ending up at the Saracen Landing Park.

"What is happening is there are people coming from other cities. They're coming here with the misunderstanding that they can disobey the traffic laws," said Whitfield. "They think they can do burnouts in the middle of the street."

Whitfield said those drivers will leave the park and go to Jefferson Square or 28th Avenue.

"What they do is they come in and clog up the gas stations and gas pumps," said Whitfield. "Others are coming into our town riding four-wheelers, popping wheelies two to three blocks at a time, holding up traffic and they're drag racing on the weekend with no respect to our police department or our citizens, spinning and doing doughnuts in the middle of the street."

Mays said he received dozens of phone calls where cars had blocked off Martha Mitchell Expressway, Blake Street, Georgia Street, and South Main Street. He also said police officers are having a hard time apprehending those on four-wheelers.

"Our officers have a tough time catching these guys because when you try to block them off, they go into the woods and the police cars can't chase them through there and they get away," said Mays.

Mays calls these crimes "senseless " and said it was getting out of hand.

During the Public Safety meeting, Handley said the police were doing the best they could with the manpower that they had.

"Our police cannot be at every place at one time, but it's a lot of disrespect to our city, our government and our police department that goes on on the weekend in Pine Bluff and we need to shut it down," said Mays.

Also short on staff is the Pine Bluff Fire Department. Fire Chief Shauwn Howell expressed his concerns during the Public Safety meeting stating the needs were still great within the fire department.

"We're budgeted for 100 personnel, but we have 90 currently on the payroll," said Howell. "Of that 90 we have five that are on some type of longterm extended leave, modified duty, or a military commitment."

Howell said a big part of his staff shortage is because the salary and benefits package are not competitive with other areas.

According to Mayor Shirley Washington, a salary and budget review will begin in June or July, which will give her a half-year projection to see what the revenue is looking like.

Besides salary and benefits, Howell said there will be plans to start replacing some of their major equipment.