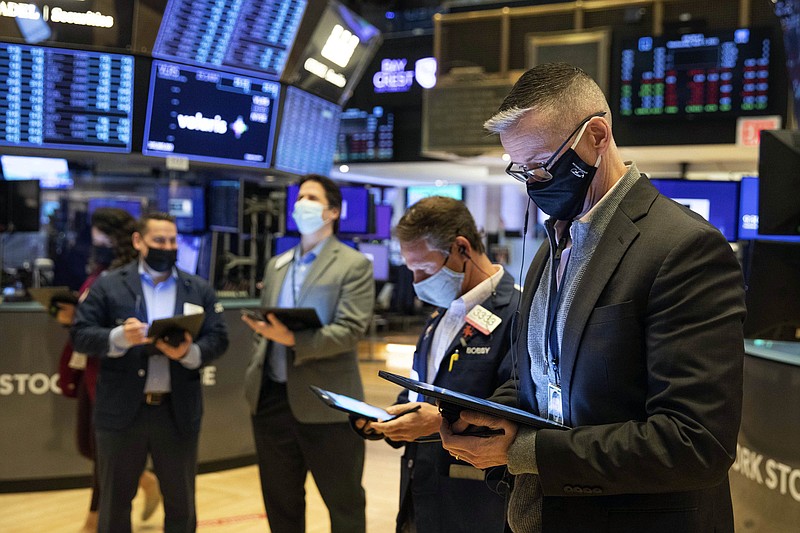 In this photo provided by the New York Stock Exchange, traders work on the floor Wednesday, April 7, 2021. Stocks wobbled between small gains and losses in afternoon trading on Wall Street Wednesday, hovering around their record highs as investors remain cautiously optimistic about the economic recovery. (Colin Ziemer/New York Stock Exchange via AP)

Wall Street capped another choppy day of trading Wednesday with a mixed finish for stock indexes and another all-time high for the S&P 500.

The benchmark index inched up 0.15% after spending much of the day wavering between small gains and losses. Technology, communication and financial companies helped lift the market, offsetting a pullback led by industrials, materials and health care stocks. Treasury yields were also mixed.

The broader market has been mostly subdued this week as investors remain cautiously optimistic about the economic recovery. Vaccine distribution has been ramping up and President Joe Biden has bumped up his deadline for states to make doses available to all adults by April 19. The vaccines are helping to fuel a recovery, but the virus is still very much a threat as variants are discovered and threaten additional lockdowns.

Analysts expect the economy to recover this year, but they also expect the market to remain choppy as investors shift money to companies and industries that stand to benefit as the pandemic eases.

Carnival, which essentially shut down during the pandemic, rose 1.4% Wednesday. The company said bookings have picked up. Other cruise line operators also gained ground as they plan to restart operations.

The yield on the 10-year Treasury inched up to 1.66% after moving up and down for much of the day. A sharp increase in bond yields since the beginning of the year reflects a growing concern among investors that inflation could return as economic growth heats up and the U.S. pulls out of its pandemic-induced recession. Higher yields can slow down the economy by making it more expensive for people and businesses to borrow money.

The stock indexes were little changed Wednesday following the release of minutes from the Federal Reserve's latest meeting on interest rate policy.

The minutes revealed that Fed officials were encouraged last month by evidence the U.S. economy was picking up, but they showed no sign of moving closer to ending their bond purchases or lifting their benchmark short-term interest rate from nearly zero.

Fed policymakers also said they expect inflation will likely rise in the next few months because of supply bottlenecks, but they believe it will remain near their 2% target over the longer run.

"Nothing was all that surprising from the minutes," said Stephanie Roth, senior markets economist at J.P. Morgan Private Bank. "The Fed is watching closely, not just the unemployment rate, but they're really focusing on bringing back the population that has fallen out of the labor force."

The minutes are from a Fed meeting that came before last week's March jobs report, which showed a surprisingly strong 916,000 positions were added that month, the most since August, and the unemployment rate fell to 6% from 6.2%.