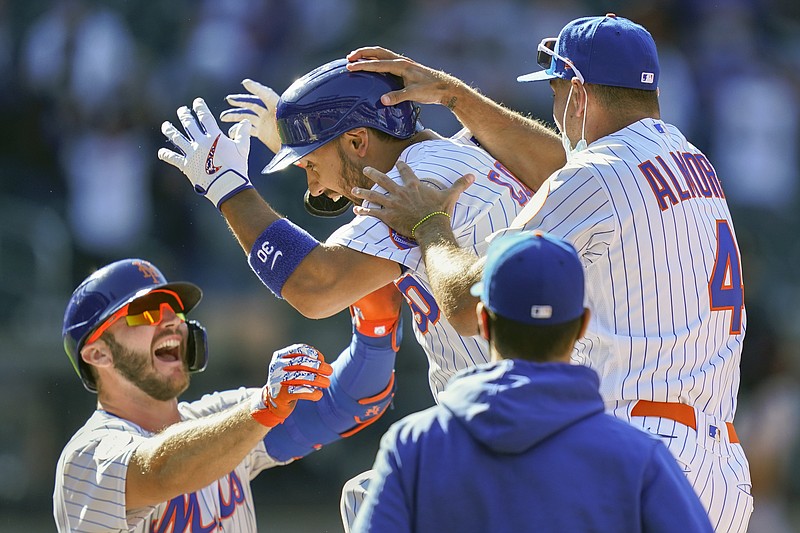 New York Mets' Michael Conforto (30) celebrates after being hit by a pitch and scoring the winning run on loaded bases during the ninth inning of a baseball game against the Miami Marlins, Thursday, April 8, 2021, in New York. (AP Photo/John Minchillo)

ST. LOUIS -- Nolan Arenado hit a tiebreaking, two-run home run in the eighth inning of his home debut with the Cardinals, lifting St. Louis over the Milwaukee Brewers 3-1 Thursday as fans returned to Busch Stadium for the first time since 2019.

Arenado, a five-time All-Star acquired from Colorado on Feb. 1 after eight seasons with the Rockies, followed a walk to Austin Dean with the score 1-1. Arenado turned on a first pitch 96.6 mph offering from Drew Rasmussen (0-1) and sent the ball 373 feet to left for his second home run this season.

Arenado pointed to the St. Louis dugout just before rounding first and screamed as he helped the Cardinals to their fourth consecutive win, setting off cheers from a crowd limited by coronavirus protocols to 13,328.

"Baseball is a magical game and it was magical today," St. Louis Manager Mike Shildt said. "The story created itself. What an amazing moment for a guy who loves to play the game. I get goosebumps just thinking about it."

Arenado took his first curtain call after the home run, stepping out of the dugout to the delight of the crowd.

"It doesn't feel very real right now," Arenado said. "It will sink in. It's unbelievable."

Arenado's only struggle came early in the day when he found it hard to navigate the bowels of his new stadium. He struggled to find the home dressing room.

"I don't know how much better a man can be at baseball," Wainwright said. "Everything he brings to the table is exactly what we need."

METS 3, MARLINS 2 Jeff McNeil launched a tying home run in the bottom of the ninth inning on his 29th birthday and New York was handed the winning run on a disputed hit by pitch for a bizarre victory over visiting Miami. With the bases loaded and one out, a scuffling Michael Conforto appeared to stick out his right elbow pad just enough to get it grazed by a 1-2 breaking ball from closer Anthony Bass that looked to be in the strike zone. Plate umpire and crew chief Ron Kulpa at first signaled strike, then quickly ruled Conforto was hit by the pitch. Conforto headed toward first base as Luis Guillorme scored and the Mets celebrated a comeback win in front of the first crowd at Citi Field in 557 days. Marlins players and manager Don Mattingly argued with Kulpa before a replay review was initiated. The review lasted 58 seconds, and the call was upheld.

CUBS 4, PIRATES 2 Javier Baez hit a go-ahead two-run home run in the sixth inning in Chicago's victory over Pittsburgh. Kris Bryant and Anthony Rizzo also homered as the Cubs pounded out a season-high 11 hits against Tyler Anderson (0-2) and four relievers. Jake Arrieta (2-0) survived a sometimes wobbly six innings, and Craig Kimbrel got five outs for his second save.

ROCKIES 7, DIAMONDBACKS 3 Jon Gray took a no-hit bid into the seventh inning and got his first win of the season, pitching Colorado past Arizona. Gray (1-0) allowed three runners through six innings. Gray threw 83 pitches through six innings in his second start of the season and was bidding to become the second Colorado pitcher to throw a no-hitter after Ubaldo Jimenez against Atlanta on April 17, 2010.

ASTROS 6, ATHLETICS 2 Carlos Correa, Yordan Alvarez and Jose Altuve homered as Houston kept up its hot start by treating the home crowd to a victory over Oakland. Houston is 6-1 this season, tied for the best seven-game start in franchise history. Five of the team's wins have come against the Athletics after a sweep in Oakland to start the season.

ANGELS 7, BLUE JAYS 5 (11) David Fletcher had a two-run single in the 11th inning. and Los Angeles beat Toronto in the first regular season game played at the Blue Jays' spring training ballpark in Dunedin, Fla. Fletcher's hit to center came on the first pitch from Rafael Dolis, who replaced Ryan Borucki (1-1) with runners on second and third and two outs.

RED SOX 7, ORIOLES 4 Eduardo Rodriguez (1-0) won in his return from heart inflammation that caused him to miss the 2020 season, allowing three runs over five innings help Boston spoil Baltimore's home opener. Rafael Devers and Kike Hernandez homered for the Red Sox. A day after his 28th birthday, Rodriguez made his first big league appearance since Sept. 29, 2019, against the Orioles at Fenway Park.

TWINS 10, MARINERS 2 Mitch Garver, Byron Buxton and Luis Arraez hit home runs to back another strong start by Jose Berrios, providing the Minnesota fans plenty to cheer for in their return to Target Field. Berrios (2-0), who no-hit Milwaukee over six innings in his first turn, threw two more hitless innings before surrendering his first run of the season in the third.

WHITE SOX 6, ROYALS 0 Lance Lynn pitched a five-hitter for the first complete game and shutout in the major leagues this season, and Chicago beat Kansas City. Yermin Mercedes kept up his scorching start with a 485-foot home run. Lynn (1-0) struck out 11 and walked none in his second shutout in 238 career starts, his first since a five-hitter against the New York Yankees on May 27, 2014.