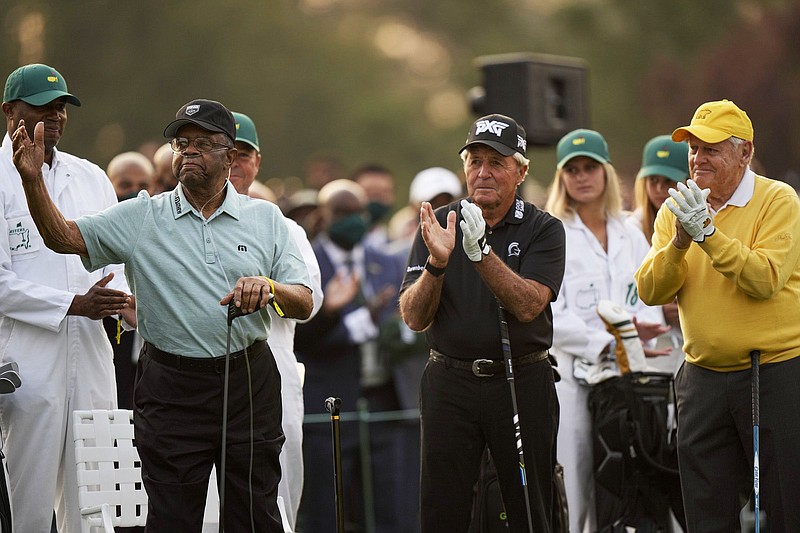 AUGUSTA, Ga. -- The applause started when Lee Elder's golf cart began moving toward the first tee. It only got louder when he arrived and slowly made his way to his seat.

"Lee, it is my privilege to say, you have the honors," Ridley said.

That prompted the first roar of the 2021 Masters Tournament.

Elder -- the first Black man to play the Masters -- rose from his chair, hoisted his driver skyward for a moment, then nodded, smiled and waved in appreciation of the hundreds of people who crowded around the first tee to see history happen. He joined Gary Player and Jack Nicklaus as an honorary starter for the Masters on Thursday morning, the first time he had been part of the ceremony.

"For me and my family, I think it was one of the most emotional experiences that I have ever witnessed or been involved in," Elder said.

Player and Nicklaus each took a swing, as is tradition, knocking drives onto the first fairway. This year marks the 60th anniversary of Player's first Masters win, the first by an international player, and the 35th anniversary of Nicklaus' sixth and final victory.

Elder, 86, did not tee off, though just as was the case in 1975, his presence simply was the much bigger story. He became the 10th past player to be part of the honorary starter ceremony, and fittingly, the first Black man to join that list.

"I think that having Lee there was the right thing to do, a nice thing to do," Nicklaus said.

Augusta National -- mindful of the ongoing national conversation about racial injustice -- announced last year that it would honor Elder with two scholarships in his name at Paine College, a historically Black institution. The scholarships will go to one men's player and one women's player. Augusta National's move led to the creation of a women's golf team at the school, with the club footing the bill for those startup costs.

Player has long been familiar with Elder's story and, at times, his struggles. He invited Elder to play in South Africa, Player's homeland, in 1969.

"It's quite sad to think that in those days, with the segregation policy that South Africa had, that I had to go to my President and get permission for Lee Elder to come and play in our PGA," Player said. "Quite sad."

They made it happen, and Elder's story kept evolving from there. He became the first Black man to play for the U.S. in the Ryder Cup in 1979, and doors slowly -- very slowly -- kept opening within the game. Augusta National made Ron Townsend its first Black member in 1990, seven years before a skinny kid named Tiger Woods won the first of his five Masters titles.

Elder -- who grew up in Dallas and got into the game as a caddie, not a player, since that essentially was the only avenue Black people had into the game at that time -- blazed the trail. He was back at Augusta National for Woods' first win in 1997. The first Black man to play the Masters was simply not going to miss seeing the first Black man winning the tournament.

"It always amazed me that presidents of the United States would be giving these different awards to athletes for their athletic prowess, and here was a man that changed the lives and changed and put a spoke in the wheel of segregation in South Africa and was never given the awards that he actually duly deserved," Player said.

The Masters sought to fix one of those award omissions this year, bringing Elder back for the honorary start. Past Masters champions Bubba Watson and Phil Mickelson, both in their green jackets, made sure that they were there for the ceremony, standing on the back of the tee box. So was Cameron Champ, one of four players of Black heritage on the PGA Tour.

"It's a great honor, and I cherish it very much, and I will always cherish it," Elder said.

Added Nicklaus: "It was long overdue."

Elder knew Jackie Robinson, who broke baseball's color barrier. He was close with Hank Aaron, who endured racist threats throughout his career, particularly as he approached what was Babe Ruth's home run record. Aaron broke that record April 8, 1974; 12 days later, Elder won what was then called the Monsanto Open to qualify for the following year's Masters.

Elder sat in Aaron's office with the Home Run King a few months ago, shortly before Aaron's death, sharing memories.

"We talked about several things ... our sports, our particular sport, and the involvement that we felt that we could help other young Blacks that was coming up behind us," Elder said. "And I certainly hope that the things that I have done have inspired a lot of young Black players and they will continue on with it." 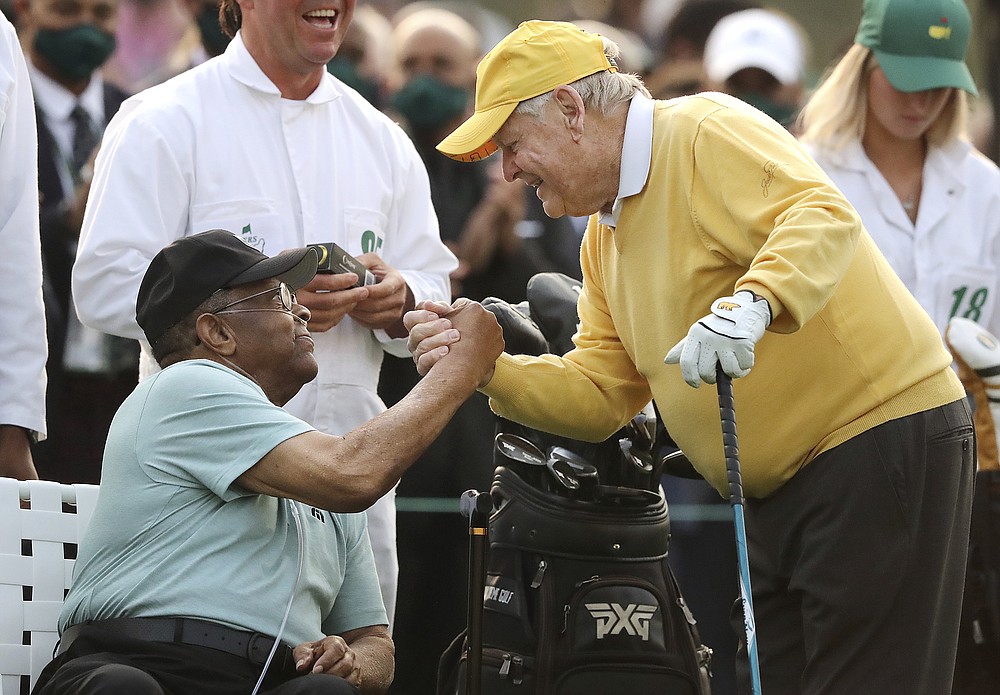 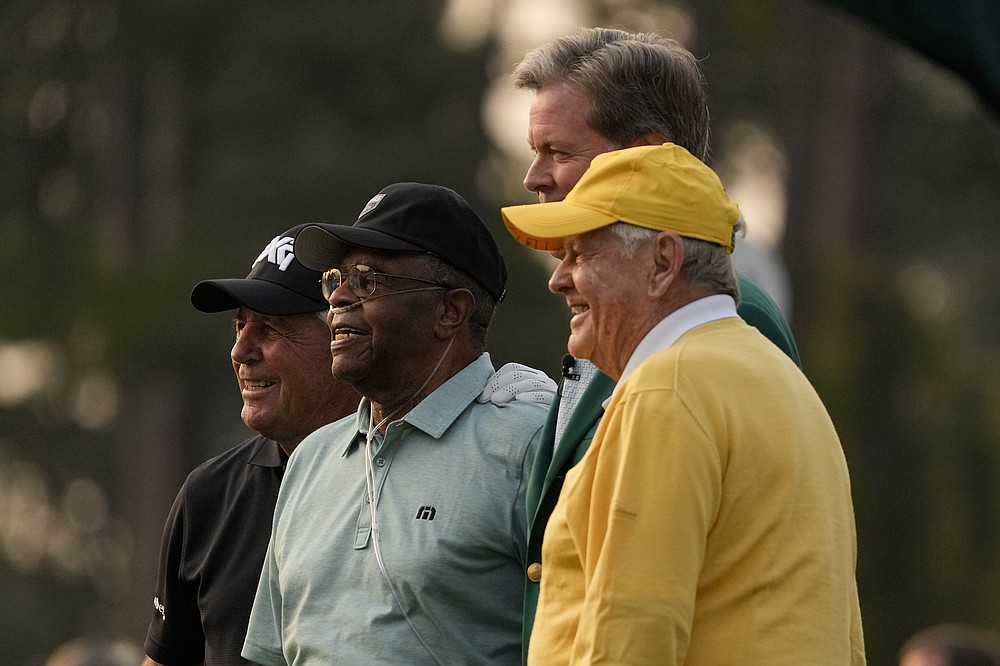 From left, Gary Player, Lee Elder, Fred Ridley, chairman of Augusta National Golf Club and the Masters Tournament and Jack Nicklaus pose after the ceremonial first tees during the first round of the Masters golf tournament on Thursday, April 8, 2021, in Augusta, Ga. (AP Photo/Gregory Bull) 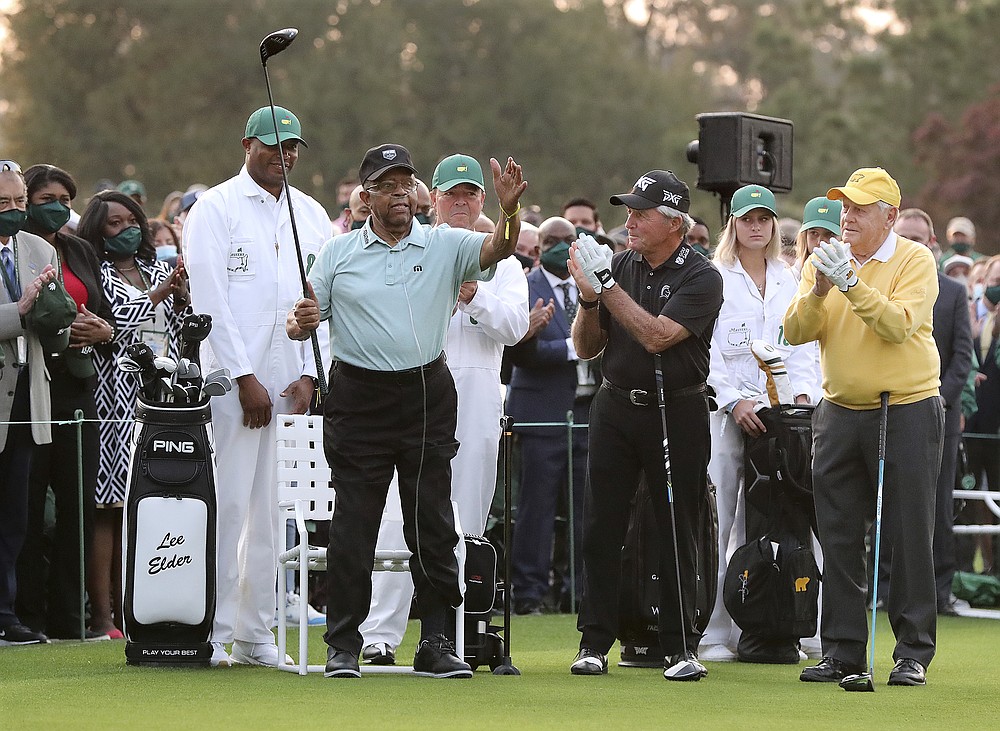 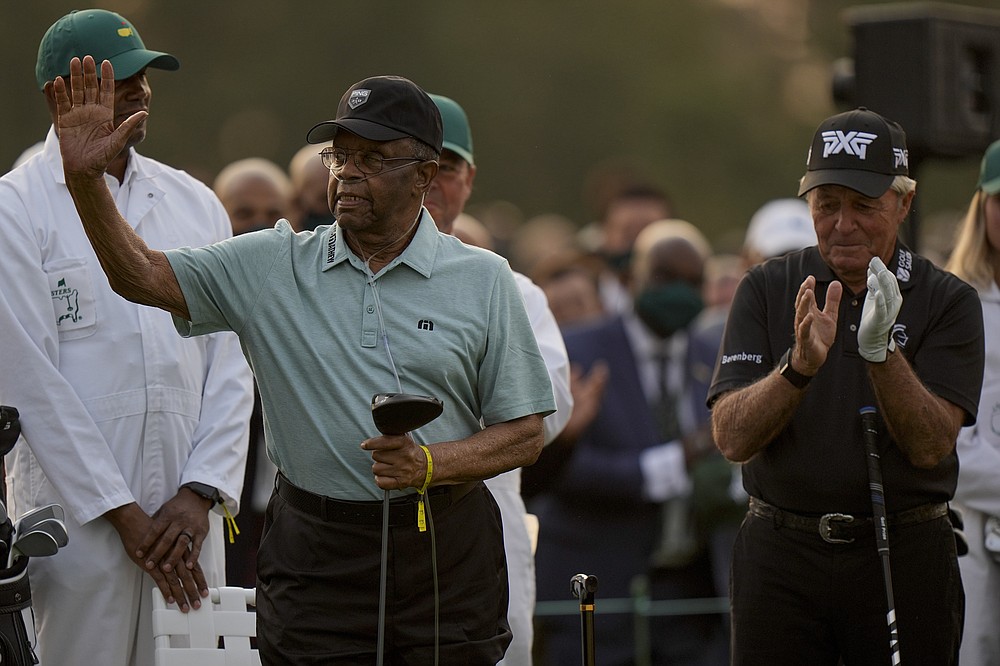 Lee Elder waves with Gary Player before the ceremonial first tee the first round of the Masters golf tournament on Thursday, April 8, 2021, in Augusta, Ga. (AP Photo/Matt Slocum) 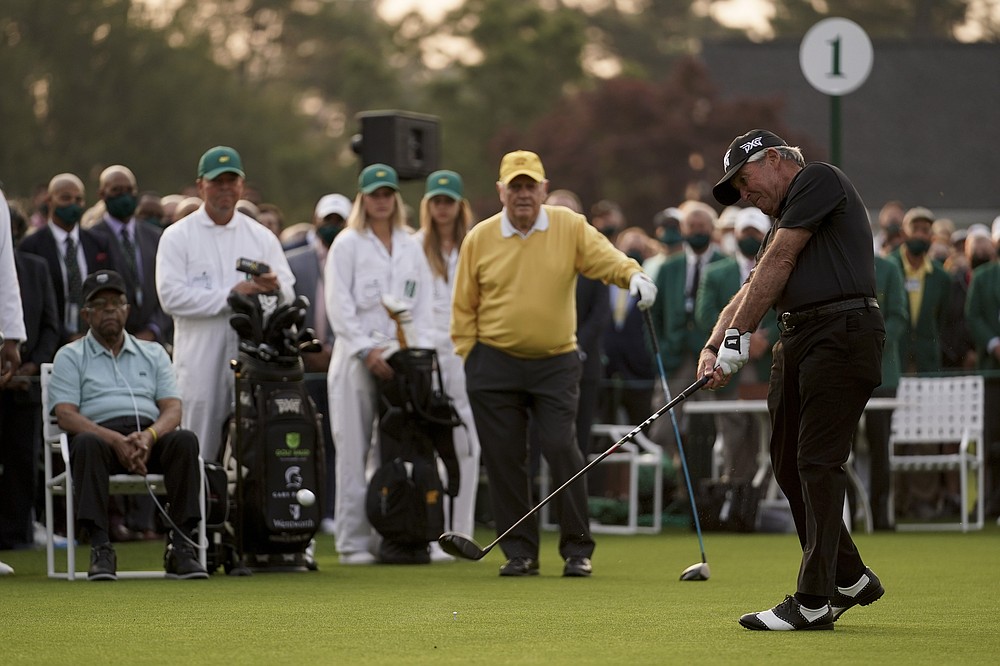 Lee Elder and Jack Nicklaus watch as Gary Player hits the ceremonial first tee during the first round of the Masters golf tournament on Thursday, April 8, 2021, in Augusta, Ga. (AP Photo/Matt Slocum) 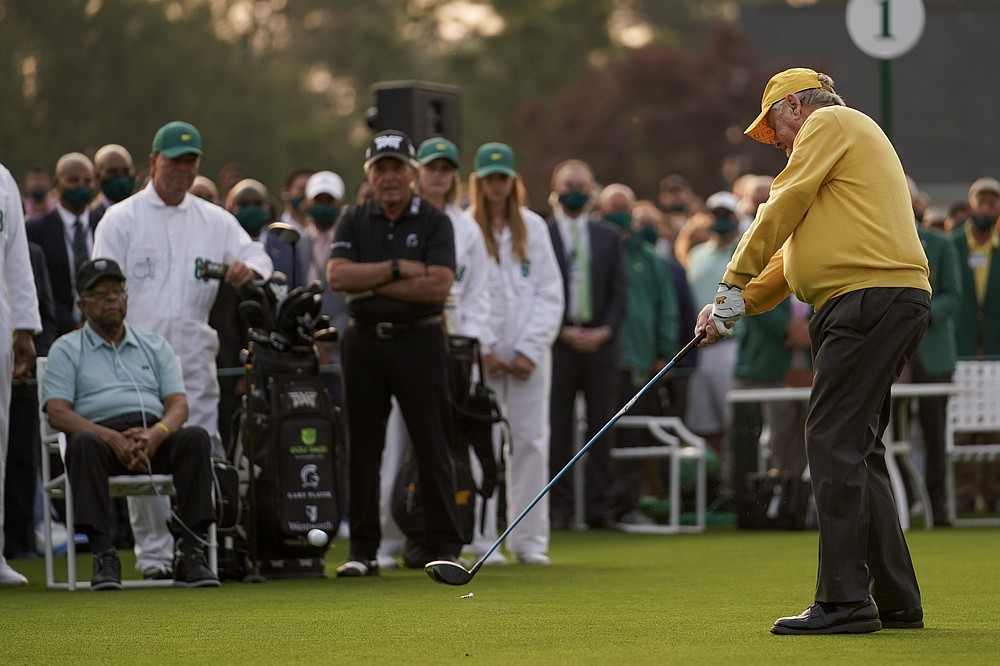 Lee Elder and Gary Player watch as Jack Nicklaus hits the ceremonial first tee during the first round of the Masters golf tournament on Thursday, April 8, 2021, in Augusta, Ga. (AP Photo/Matt Slocum)
ADVERTISEMENT