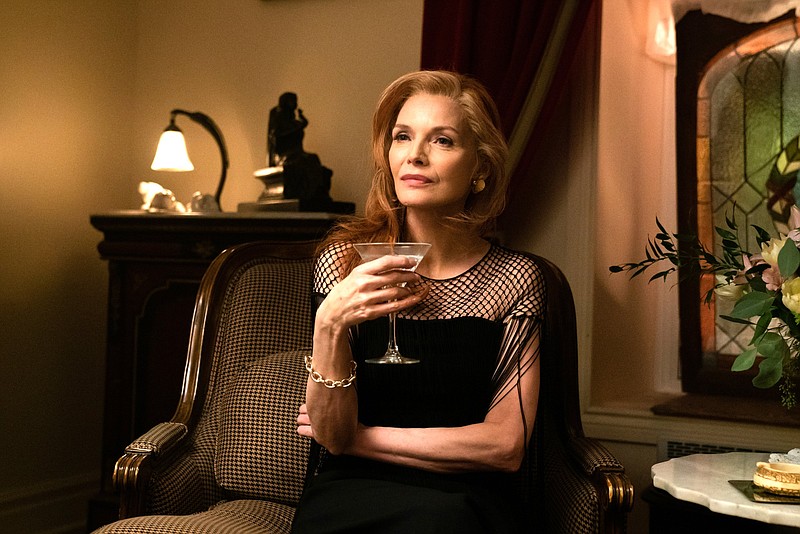 To make a "French exit" is to do something without asking anyone's permission.

These days, it's probably most commonly used as a synonym for "ghosting" -- when you leave a party early without saying goodbye to the hosts (whether to avoid upsetting them or because it's inconvenient), you are making a French exit. Depending on the circumstances, it might be considered rude.

The term dates to the 18th century, when England and France were global powers that constantly entangled militarily and culturally. Each implied the other's soldiers habitually behaved badly -- a British officer would say an AWOL soldier took a "French exit." His French analog would use the phrase filer à l'anglaise, which means "to leave in the English style."

"French Exit" is also the title of Azazel Jacobs' new film, chosen as the closing night screening for the (virtual) New York Film Festival in October. That might lead you to believe it is a sophisticated film designed for epicurean tastes, and you would be right.

It stars Michelle Pfeiffer in high glamour mode as Frances Price, a New York socialite who made her fortune by marrying a ruthless billionaire (Tracy Letts, who stars in Jacobs' 2017 film "The Lovers").

Or maybe he wasn't quite that wealthy, for after his sudden death -- she left his lifeless body lying in their apartment for a few days so she could take a ski trip to Vail, reporting it to the authorities only after she returned -- it has only taken a dozen years for her to run through his money. She seems nonplussed by the idea.

"My plan was to die before the money ran out," she tells her exasperated accountant. "But I kept and kept not dying."

Nobody ever taught her how to live out on the street, and now she's going to have to get used to it. The only thing to do is to cash out, sell the apartment and its contents, to leave for Paris. Quelle horreur.

Actually, it makes a modicum of sense. A friend has offered Frances use of her Paris apartment. So she packs up the remaining stacks of euros and departs on a transatlantic ship with her sullen dilettante of a son Malcolm (Lucas Hedges) and a black cat, Small Frank, who is named after -- and may or may not be the reincarnation of -- her late husband.

After her husband died (and she spent a few days in jail for neglecting his corpse) Frances pulled Malcolm out of boarding school, presumably because she needed a satellite to dote on her. Malcolm has since outgrown the role and banters with his mother in a private deadpan code that, for all its superficial cattiness, retains a certain residual warmth.

Frances has never treated Malcolm as a child, which might have robbed him of something but relieved him of childhood. Their odd couple-ness bespeaks the solidarity of twins and maybe even a chaste version of the inter-generational romance of Bud Cort and Ruth Gordon in "Harold and Maude," Hal Ashby's dark comedy from 1971.

Privileged and prideful, these two have never asked anyone's permission for anything, and even as their money dwindles they continue living in the style to which they have been accustomed. Frances pays for coffee with 100-euro notes and doesn't wait for change. Sensing, perhaps, kindred defiant spirits in the ranks of the homeless, she pushes bills on them. The money will not last, but neither will the life.

Still, there might be an afterlife. During the crossing, Malcolm has an encounter with forthright shipboard psychic Madeleine (Danielle Macdonald), whose refusal to elide the bad news from the fortunes she tells lands her in the ship's brig.

She'll turn up again in Paris to lead a couple of seances in which the missing Small Frank -- who, having been smuggled into France, runs off after Frances apparently tries to strangle him -- speaks in the disembodied voice of Big Frank.

Soon after they arrive in Paris, Frances and Malcolm are invited to a party at the home of widowed American expatriate Madame Reynard (Valerie Mahaffey); when they turn up, they're taken aback to find they are the only guests. Though Frances' first instinct is to be nasty, she's disarmed by Reynard's simple and sincere explanation when asked why she'd invite strangers into her home: "I'm lonely, " she says.

It's not long before Frances and Malcolm have attracted a strange sort of family to their flat. Madeline camps out there, as does (for some reason never explained) Julius (marvelous Isaach De Bankolé), the private investigator Frances hires to track down her missing cat. Malcolm's longtime girlfriend Susan (Imogen Poots), to whom he'd just become engaged before learning of his financial reversal, shows up with her new uber-capitalist boyfriend, and Madame Reynard is always around. Then the apartment's owner Joan (Susan Coyne) arrives.

It gets crowded in there -- at times "French Exit" begins to feel more like weak Wes Anderson than anything else. There is a wide shot rather late in the movie when all the characters named above are arranged across the screen, nudged forward or backward in the depth of field, posed just so, lounging or leaning or otherwise captured in an attitude of attention that you can sense the director and art director, huddled over the ­iPad monitor, moved this teacup or that book incrementally to the left or right.

Still, in its best moments, when Pfeiffer plays the highly performative Frances as someone who doesn't know how to act except as a cliché, there's a wonderful vitality to "French Exit." This character is not a caricature, though she may have been purposefully written as one.

Frances is enlivened by an intelligence and the desperation that is most desperate not to show itself. There's a scene in a cafe where Malcolm asks for the check in bad French, which may be why the waiter decides that moment to take a smoke break, glaring at his American customers as he aggressively puffs away.

Frances levels her eyes at him as she calmly removes a perfume atomizer from her purse and spritzes a rose in the vase on their table. She then pulls a lighter from that same purse and ignites the rose. This gets his attention.

"French Exit" isn't a tremendously satisfying film. Its tone drifts from mock Preston Sturges madcap to sub-Whit Stillman mannerism to low Woody Allen snobbery. (If you don't like the movie, wait five minutes. It'll change.) There's a sense that the screenwriters (Jacobs and Patrick DeWitt, who wrote the original novel) feel a little too cool for school, and that there's a certain ambiguity built into the script to give it an unearned air of profundity.

Still, Pfeiffer saves even the archest lines with her performance; we get the feeling that Frances is smirking at the little movie in which she finds herself trapped.