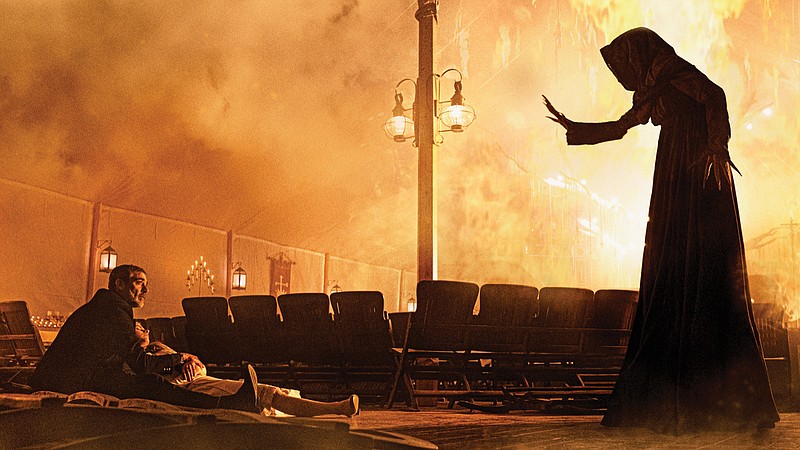 Jeffrey Dean Morgan and Cricket Brown are confronted by something that’s definitely not the Blessed Virgin in Screen Gems’ “The Unholy,” which came in at No. 2 last weekend with $3.2 million at U.S. theaters.

Moviegoers sent a message to Hollywood over last weekend: We're ready to return to theaters -- and we'll buy tickets even if the same film is instantly available in our living rooms -- but we want to leave our grim world for a silly fantasy one.

"Godzilla vs. Kong," a throwback monster movie in which a lizard with atomic breath battles a computer-generated ape on top of an aircraft carrier (before everyone decamps to the hollow center of Earth), took in an estimated $48.5 million at 3,064 North American cinemas between Wednesday and Sunday. It was the largest turnout (by far) for a movie since the pandemic began.

The PG-13 movie was not even an exclusive offering to theaters. "Godzilla vs. Kong," produced by Legendary Entertainment, was also available on HBO Max, a streaming service that sells monthly subscriptions for $15, less than the cost of one adult ticket at cinemas in major cities.

Made for approximately $160 million, "Godzilla vs. Kong" is one of a small handful of big-budget movies to open in theaters. WarnerMedia, which owns Warner Bros. and HBO Max, hedged its bet, though, by streaming the film to subscribers in North America at the same time -- a strategy it's pursuing for all 2021 releases.

"People seem ready for emotional release, to experience that human connectivity -- laughing together, getting scared together -- and complete transportation that only movie theaters can provide," said Mary Parent, Legendary's vice chairman and head of worldwide production.

"The resounding success of 'Godzilla vs. Kong' represents an incredibly important and positive milestone both financially and symbolically for the movie industry," said Paul Dergarabedian, a senior media analyst at Comscore. "We are seeing that as consumer confidence grows, so too does the ability of movie theaters to generate stronger box office over time."

A new series of movies was restarted in 2014 with "Godzilla," followed by 2017's "Kong: Skull Island" and 2019's "Godzilla: King of Monsters." Returns have been steadily diminishing. The previous three films opened domestically with $200.7 million, $168.1 million and $47.8 million, respectively. But the franchise had been leading up to the prize fight of "Godzilla vs. Kong." Directed by Adam Wingard, its human co-stars include Alexander Skarsgård, Brian Tyree Henry and Rebecca Hall.

Overseas, "Godzilla vs. Kong" collected $236.9 million, including a strong $136 million in China, a market that has lately preferred local movies over imported ones. The movie has not yet opened in other major markets, such as Japan and Brazil.

The previous benchmark for a pandemic-era domestic opening was the debut of "Wonder Woman 1984" in December, with $16.7 million over the three-day Christmas weekend. "Godzilla vs. Kong," which simultaneously debuted domestically in theaters and on HBO Max, played in 3,064 locations, the most since the pandemic began more than a year ago. It currently stands at $285.4 million in global receipts.

Elsewhere at the box office this weekend, Sony Screen Gems' "The Unholy" opened in 1,850 locations to $3.2 million, and Atlas Distribution's "The Girl Who Believes in Miracles" premiered in 680 locations and amassed $580,068.

Some box office analysts were reluctant to declare a recovery for Hollywood, noting that coronavirus cases have been rising again in the United States and that parts of Europe have returned to lockdown. David Gross, who runs Franchise Entertainment Research, a film consultancy, said the turnout between Friday and Sunday -- while a "clear and positive indication that moviegoing has inherent strengths that aren't going away" -- was nonetheless "half of what it would have been under normal circumstances."

Although American theaters are slowly returning after a year of harried reopenings and closings, major theaters including Regal and AMC and smaller chains have not yet reopened.

But about 93% of theaters in the United States have been cleared to open. Still, government guidelines limit capacity to 50% and, in some big cities, 25%. The majority of theaters in Canada remain closed.