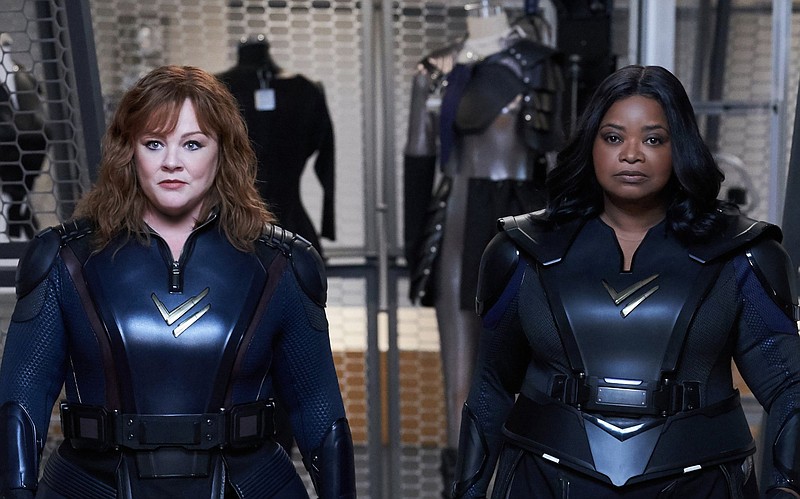 If your mom or dad is looking for a superhero movie to casually watch on a Friday night, then congrats. "Thunder Force" was made just for them. For everyone else, though ... ehhhhh.

Netflix has some wonderful original content. The platform excels in animation with amazing series like "Castlevania" and "Carmen Sandiego." A few weekends ago I stayed up all night watching "Dota: Dragon's Blood."

But the movies Netflix orders are a mixed bag. Some knock it out of the park, like "The Old Guard." Then there's this giant puddle of movies that ranges from offensive to mediocre. Somewhere in the middle of that puddle is "Thunder Force."

I was immediately wary with Melissa McCarthy in the lead role. She's becoming the female equivalent of Adam Sandler, funny at first, but now she just plays an obnoxious yet goodhearted goober in every movie she's in. It's tiresome and the primary reason why I've avoided all Adam Sandler films since "Click."

The biggest mystery "Thunder Force" offers is how it roped a talented actor with an Academy Award into a lead role. Octavia Spencer couldn't save this movie -- there but for the grace of God.

The premise in "Thunder Force" is pretty simple. McCarthy plays a woman named Lydia who accidentally stumbles into her friend's lab and gets injected with a formula granting her super strength. Her genius friend Emily (Spencer) then uses the remaining formula to give herself invisibility.

How those two powers were created or chosen is beyond me. I'd put several abilities above invisibility, like healing, teleportation, laser vision, super speed, telekinesis. Why didn't she invent formulas for those?

Once Emily and Lydia have their super powers, they team up to stop villains called miscreants: evil people who somehow got superhuman abilities from some kind of cosmic radiation that only affects bad people. You gotta watch out for that ... morally selective space radiation. There are comic books from the 1930s that have less questionable storylines.

If you thought invisibility and super strength were creative powers for the heroes, wait until you hear about the miscreants. They have a guy with super strength, a girl who shoots lightning and, as the trailer reveals, Jason Bateman with crab pincers for hands. I did like low-key Bateman in that role. He was just so ridiculously nonchalant for a man crab.

"Thunder Force" was difficult to sit through with all the obnoxious attempts at humor, clichés, and jokes that fell flat. And while the film did provide me a few chuckles, I had to swim through 20 minutes of facepalms to get to each giggle. When you do the math (which I hate), it just doesn't add up to an enjoyable cinematic experience.

Right when the movie starts, we're given narration set over actual comic book panels, an effect that instantly dates "Thunder Force" and makes it feel like an early 2000s attempt at a superhero movie, like a more boring version of "My Super Ex-Girlfriend."

With that said, the story's opening scenes with Emily and Lydia as kids being picked on in school provided a few laughs and actually had me wondering if the film would be as rough as I anticipated. Of course, one of those kids grew up into McCarthy's character, so that answered the question for me.

By far the worst part of "Thunder Force" is just how long unfunny scenes and jokes go on. Early in the movie there's this character named Clyde (Brendan Jennings) who can't tell knock-knock jokes. And the minutes he's allowed to keep repeating them with the camera still rolling are painful to sit through.

It's the same with Lydia's friend who owns a diner. He gives this awful two-minute metaphor about skipping rocks that ends with him discussing the murder of salmon. It's as though the mere fact that his words make no sense is supposed to be funny for the audience. I just found myself wanting to bang my head on the coffee table.

Then there are some of Lydia's awful lines like, "This place is taters" and "Do chicks have groins?" She also gets 30 seconds to do an awful impression of Urkel. Never trust a movie where the director, screenwriter and producer are all the same person. It's true for Steven Seagal movies. It's true for "Thunder Force," which is directed by McCarthy's husband, Ben Falcone.

The amount of Old Style beer Lydia drinks in this movie reaches a level of gratuitous product placement that's second only to Brad Pitt drinking Pepsi for several seconds in "World War Z."

I lost count of the number of scenes that left me holding my face in my hands and groaning. Was it the wanton dance scene between Lydia and the man crab that stretched on for an eternity or the repeated "jokes" about McCarthy and Spencer being bigger girls and having trouble getting in and out of a Lamborghini? Who can say?

And the way the story unfolds, you could predict every single plot point that wouldn't have even been a surprise had this movie come out in the '90s. That's the villain. They're going to betray Lydia and Emily. That person is going to get superpowers. "Thunder Force" stealing clichés from other superhero movies is like a bank robber charging in and stealing all the pens.

The soundtrack for "Thunder Force" is full of dad rock, even opening with AC/DC. And there's way too much singing from Lydia and Emily. They sing Glen Frey and Seal songs in this movie. Both are painful.

If there's a silver lining for "Thunder Force" it's the bond Lydia forms with Emily's daughter, Tracy (Taylor Mosby). Watching McCarthy play the "fun aunt" for an otherwise sheltered teenager was cute. No complaints in that one specific area.

On top of everything I've mentioned, "Thunder Force" has the gall to swing for an emotional ending it definitely doesn't earn. And there're so many gross scenes I didn't need to witness.