A different way to think football 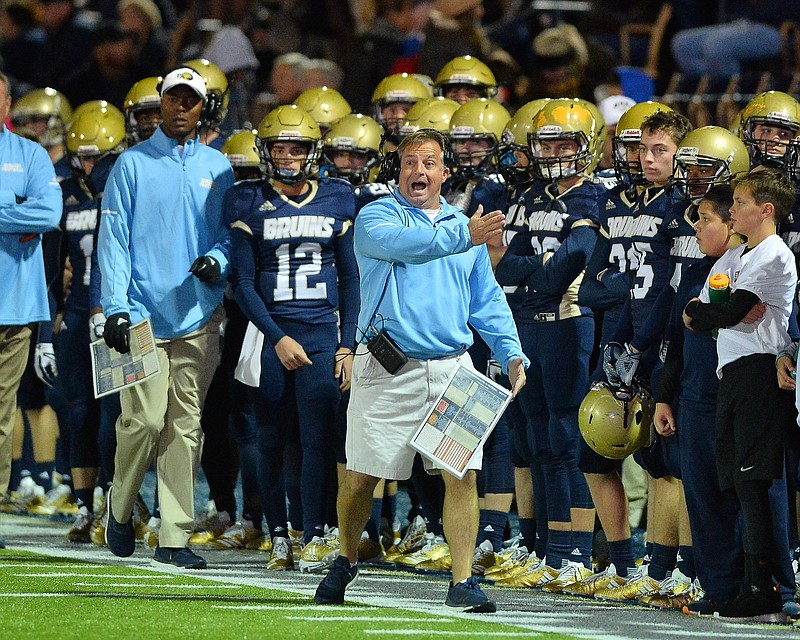 Kevin Kelley has led Pulaski Academy to nine football state championships since becoming the Bruins’ head coach in 2003. (Special to the Democrat-Gazette/Jimmy Jones)

If Kevin Kelley is ever diagnosed with terminal cancer, he's already got a plan.

He's going to make the journey north to Chicago, wait for a storm to come sweeping toward the shores of Lake Michigan and head to the top of the 108-story Willis Tower with a lightning rod in his hands.

Should it kill him, Kelley's OK with that. Most people -- somewhere between 70% and 90% -- struck directly by lightning survive.

But Kelley is constantly curious. He wonders if lightning can kill cancer.

"It's something we've never tried," the 51-year-old said.

Kelley is willing to take his chances, knowing that the possibility of discovering something new and bettering society in the process is out there.

The steady flow of questions running through Kelley's mind -- and his unending lust for answers -- is what has propelled his Pulaski Academy teams to unmatched recent success in the Arkansas high school football world, capturing nine state titles with a nationally renowned offense that has posted the 12 highest single-season yardage totals in Arkansas history.

What if we pass more than pretty much any other team in the state?

What if we go for it on fourth down and never punt?

What if we go for an onside kick after every score?

What if we don't practice tackling?

Those are thoughts that would seem blasphemous to most football minds. For Kelley, they are notions that have fed his desire to answer 'why' for nearly three decades as a high school football coach who is set to enter the Arkansas Sports Hall of Fame on Friday at the Statehouse Convention Center in Little Rock.

"I'm a firm believer that things in the world are out there," Kelley said. "There's always a way to improve significantly. People talk about, every day [getting] one percent better. ... I don't want to be one percent better -- I want to be a whole freaking lot better."

When Kelley graduated from Henderson State University in 1992, the Hot Springs native looked for a coaching job in the state.

With few available, he headed to Texas in 1993. He had a choice among several offers, ultimately taking a job in Carrollton, a northwest suburb of Dallas, just a few minutes' drive from the Cowboys' Valley Ranch practice field.

He worked under three different head coaches in the span of four seasons, and the challenges of frequent churn taught Kelley what not to do as a coach.

He returned to Arkansas in 1997, joining Pulaski Academy as an offensive coordinator, a role he would hold for six years. In that span, the Bruins reached the state semifinals twice, something they'd accomplished just two times prior in school history.

Kelley was then promoted to head coach in 2003, and Pulaski Academy won its first state championship that year.

En route, the Bruins punted only 21 times in 15 games -- partly a product of the team's dominant offense and also a consequence of Kelley's early dabbling in analytics.

Earlier in 2003, Michael Lewis' "Moneyball" -- a deep-dive into the Oakland Athletics' use of analytics in roster-building and the mind of General Manager Billy Beane -- was published.

Kelley knew similar number-crunching could benefit his teams, but he had to figure out both the how and the why.

It wasn't until 2007, a year after losing 56-55 to powerhouse Greenwood in the state title game, that Kelley leaned in all the way.

"We're playing Pine Bluff Dollarway, and we were winning by five points with five minutes left in the game," he recalled. "The amazing thing is that it's 14 years ago, and I remember it like it was yesterday. I asked my defensive coordinator, 'Hey, if I punt it here, can you stop them?' And it was fourth and 7, we were on our own 30 -- and I'd never punt now on that.

"He goes, 'Yeah, we'll stop them.' We punted and five plays later, they're in the end zone and we lose. I was just done with it."

The Bruins didn't punt the rest of the season. They've done so eight times in the past 18 seasons, equaling the number of championships the school of 1,345 has brought back to its Little Rock campus in the same span.

And it's put Kelley on the map as a football celebrity.

"A lot of people think because we're a small state, we don't have good football," Lake Hamilton Coach Tommy Gilleran said. "But we have really good football here in Arkansas, and he's brought that to life."

Kelley likes to view his life through tipping points, a term popularized by Malcolm Gladwell's 2000 novel, "The Tipping Point: How Little Things Can Make A Big Difference".

If that 2007 loss was the first tipping point, the second came seven years later when Kelley was invited to speak at the 2014 Sloan Sports Analytics Conference -- his second trip to the annual convention hosted by Massachusetts Institute of Technology and co-chaired by current Sixers General Manager Daryl Morey.

Kelley already had garnered plenty of recognition by then. His team was featured on HBO's "Real Sports with Bryant Gumbel" in 2011, and he was being paid to speak to national and multinational corporations, a list that now includes brands such as Adidas, Ticketmaster and Halliburton.

It was that engagement, though, when Kelley started to fully grasp the company he shared.

To his left sat Morey, baseball analytics pioneer Bill James and Nate Silver, the renowned statistician and founder of FiveThirtyEight. To his right was George Karl, one of nine coaches in NBA history to win 1,000 games.

And there was Kelley, a "5-7, little short fat guy" who says he can't even change the light bulbs in his own house.

Kelley bristles when asked whether he considers himself a celebrity -- even though he regularly exchanges texts and phone calls with six-time Super Bowl-winning Coach Bill Belichick.

But genius? He won't disagree with you there.

"I don't have much," Kelley said. "I'm good with numbers -- really good with numbers, I'm intelligent there -- and somehow, I'm able to put it all together and call [plays] that have a higher tendency to be wide open and work ... I'm really good at that. God gave me the brain to do it, and the desire to want to do it."

Kelley took things to another level that fall. He dove into the numbers to identify the things that would, on their own, make his team better.

Like punting, stripping the football and tackling were gone from practices. The Bruins instead keyed in on 20-yard plays and tackles for loss -- the two statistics Kelley identified as the top indicators of successful teams.

And it worked. Pulaski Academy ripped off four consecutive state titles from 2014-17 -- a feat accomplished by only three other schools in Arkansas history and not since Barton in 1986-89 -- on its way to six of the past seven Class 5A championships.

"He started out with, 'How can I win with guys who are 5-7 and 175 pounds?' " Pulaski Academy President and Head of School Matt Walsh said. "High standards, success, discipline, preparation, hard work, engaging with other people, building relationships, innovating. ... That's [Kevin's] lasting legacy."

Sitting in his office, tucked back behind a weight room that was years from even being thought of when Kelley arrived at the 32-acre campus in west Little Rock in 1997, Kelley doesn't need a second when asked what's left to accomplish with the Bruins.

Yet he still wants to achieve just that. Kelley's next goal is scoring on 100% of his team's possessions.

He acknowledges it's almost impossible -- fumbles are random, he explains, and they're inevitable at some point in the course of a season.

It doesn't stop him from trying. With current Arkansas State University quarterback Layne Hatcher under center in 2017, Pulaski Academy scored 90% of the time. The next two years, the Bruins came close to matching their high-water mark with 89% and 88% conversion rates.

Other than that, what else is there left for Kelley to accomplish?

Yes, the Bruins would join an elite club with one more state championship -- only Little Rock Central, Pine Bluff, Fort Smith Northside and Greenwood have won 10 or more.

So how about college football?

"I've always had a lot of respect for how he went about his business," said Central Florida Coach Gus Malzahn, who coached at Shiloh Christian and Springdale before jumping to the collegiate level. "What always stood out to me was that he had enough courage to do what he believed in. That says a lot about him."

Malzahn, who was hired as the head coach at Arkansas State in 2012 after six seasons as a Division I offensive coordinator, believes his former foe can take a similar jump.

Kelley, of course, is all the more confident. A month ago, The Athletic's Andy Staples suggested Kansas hire Kelley as its next head coach.

"My dream goal is [to take] a terrible FBS school -- where everybody's like, you can't do it here, there's no way, we've tried everything -- and show them, in literally Year One, vast improvement," said Kelley, who added he believes he can win five games in his first season. "I just know that we're doing the decisions better. You're going to get better the minute we walk in the door because we make better decisions."

Maybe the chance comes as a head coach, where he'd be able to fully implement his system.

Maybe it's as an offensive coordinator -- and if Kelley only has three downs to work with instead of four, he'll still find a way to post video-game numbers.

It's just not what's on his mind as he enters the Arkansas Sports Hall of Fame.

For all of Kelley's bravado, he didn't even tell his wife when he learned he was set to be inducted. It's an honor that, for him, ranks only with winning the 2016 USA Today High School Football Coach of the Year.

"I know I'm good at what I do, and I don't say that to be arrogant. I've worked hard and I'm confident, but not [Hall-of-Fame worthy]," Kelley said. "These guys are All-Americans. It's the owner of the Dallas Cowboys. I'm a high school football coach."

The third in a series profiling inductees into the Arkansas Sports Hall of Fame Class of 2021. The induction ceremony will be held at 6:30 p.m. on Friday at the Statehouse Convention Center in Little Rock.

Kevin Kelley at a glance

NOTEWORTHY Coached Pulaski Academy to nine state titles, including six of the past seven seasons with four consecutive championships from 2014-17. … Earned USA Today High School Football Coach of the Year honors in 2016 as the Bruins finished 13-1 en route to a third consecutive Class 5A title with four playoff victories by at least 28 points. … Under Kelley, Pulaski Academy has compiled a 216-29-1 record in 18 seasons. … Pioneered an analytics-based football approach as his teams almost never punt and almost always uses onside kicks. … Kelley’s teams have registered the 12 top single-season offenses in Arkansas high school football history. 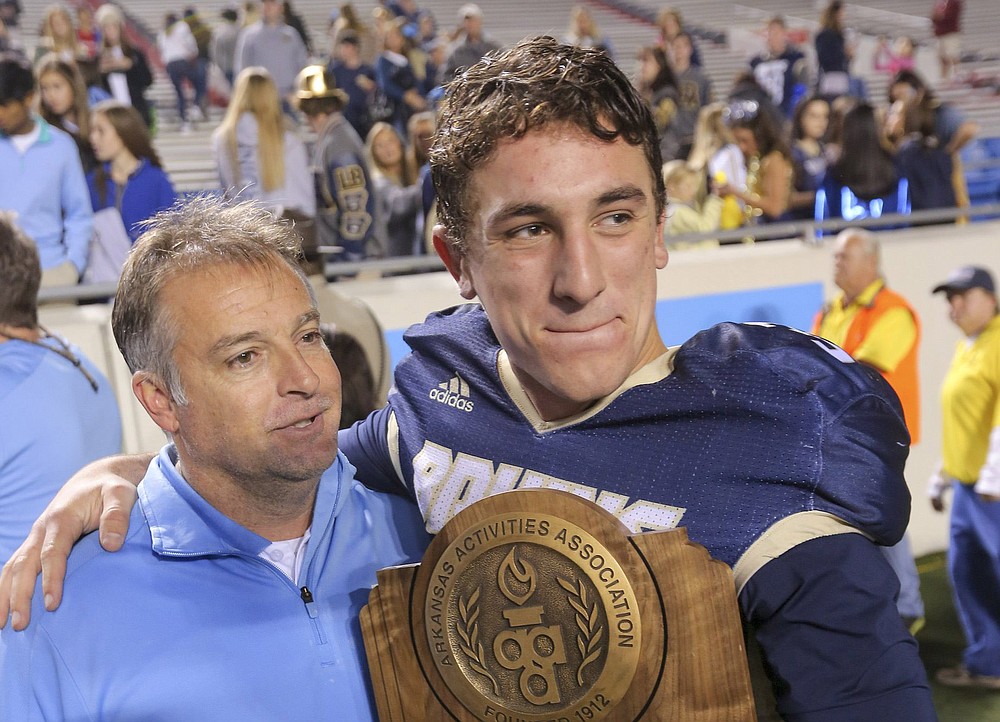 Pulaski Academy Coach Kevin Kelley (left) celebrates with quarterback Layne Hatcher — now at Arkansas State University — after the Bruins won their fourth consecutive Class 5A state championship in 2017 against Little Rock McClellan at War Memorial Stadium in Little Rock. Kelley, who is being inducted into the Arkansas Sports Hall of Fame on Friday, has led the Bruins to nine state titles in his 18 seasons at the Little Rock school. (Democrat-Gazette file photo)
ADVERTISEMENT