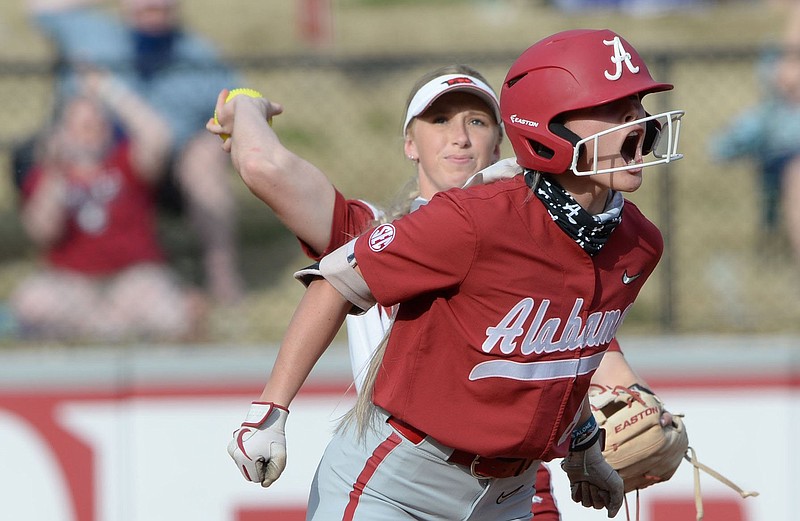 Alabama’s KB Sides celebrates after hitting a two-run double during the No. 3 Crimson Tide’s victory over No. 8 Arkansas on Friday at Bogle Park in Fayetteville. More photos available at arkansasonline.com/410alaua. (NWA Democrat-Gazette/Andy Shupe)

FAYETTEVILLE -- No. 3 Alabama scored four times in the third inning, and Montana Fouts made it stand up Friday night at Bogle Park.

Fouts didn't allow an earned run and struck out 12 to help the Crimson Tide edge No. 8 Arkansas 5-3 in a top-10 duel in the SEC.

Arkansas Coach Courtney Deifel said the Razorbacks, who had their 12-game winning streak snapped, failed to take advantage of scoring chances in dropping their first conference game of the season.

"I think they capitalized on opportunities, and I feel like we had more and just didn't get the timely hit," Deifel said. "I just look at the game as a good old-fashioned SEC battle that we were on the wrong side of tonight.

"I think we gave ourselves a ton of opportunities that we didn't necessarily cash in on. I think we're one hit away from winning that game. It felt like three versus eight."

Fouts (12-2) walked a tightrope at times, but struck out Ally Manzo with the bases loaded in the fifth. Then she got Danielle Gibson to ground out with the bags full in the sixth to protect the Crimson Tide's 5-3 lead.

The junior right-hander scattered five hits and allowed three runs (all unearned) in the complete-game effort. She walked six, including two intentionally.

Designated player Linnie Malkin, who accounted for two of Arkansas' five hits, said Fouts is the hardest thrower the Razorbacks (32-4, 12-1 SEC) have seen this season.

"Just getting outside of ourselves, I mean we have really good eyes," Malkin said. "Just really trusting our abilities, kind of letting go of the fact that it was a top-10 matchup. Just staying within ourselves. I guess we kinda got out of our comfort zone and in our heads a little bit."

Deifel credited Fouts, but also thought her team was a bit out of sorts at key times.

"I think she did a good job of mixing her spots," Deifel said. "She got us to chase out of our zone more than we typically do.

"Really this is the first day we weren't so great in the moment. I think we just got a little outside ourselves and made certain moments bigger than they were, and [we] were just uncharacteristic in a few at-bats.

"I think that's when you have to tip your hat to the pitcher, and Montana Fouts is a great pitcher."

Alabama (30-4, 10-3) got all the runs it would need in the third inning. KB Sides lined a two-run double into the left-center field gap to give the Crimson Tide a 2-0 lead. Catcher Bailey Hemphill hammered a two-run home run off Arkansas starter Mary Haff (18-3) to cap the inning.

Arkansas answered in the bottom of the inning with three unearned runs -- all after two were out. The Razorbacks scored their first run thanks to a throwing error by Fouts. The Crimson Tide then intentionally walked Gibson to load the bases.

Malkin made Alabama pay with a two-run single past the shortstop to pull the Razorbacks within 4-3, but Arkansas wouldn't score again.

Savannah Woodard's two-out solo home run pushed the Alabama lead to 5-3 in the fourth. Arkansas threatened in the bottom of the inning when Kayla Green doubled off the left-field wall and went to third on a wild pitch, but Keely Huffine struck out on a check swing and Sam Torres grounded out to end the inning.

The teams meet again this morning. First pitch is slated for 11 a.m., and the game will be broadcast on ESPN2. 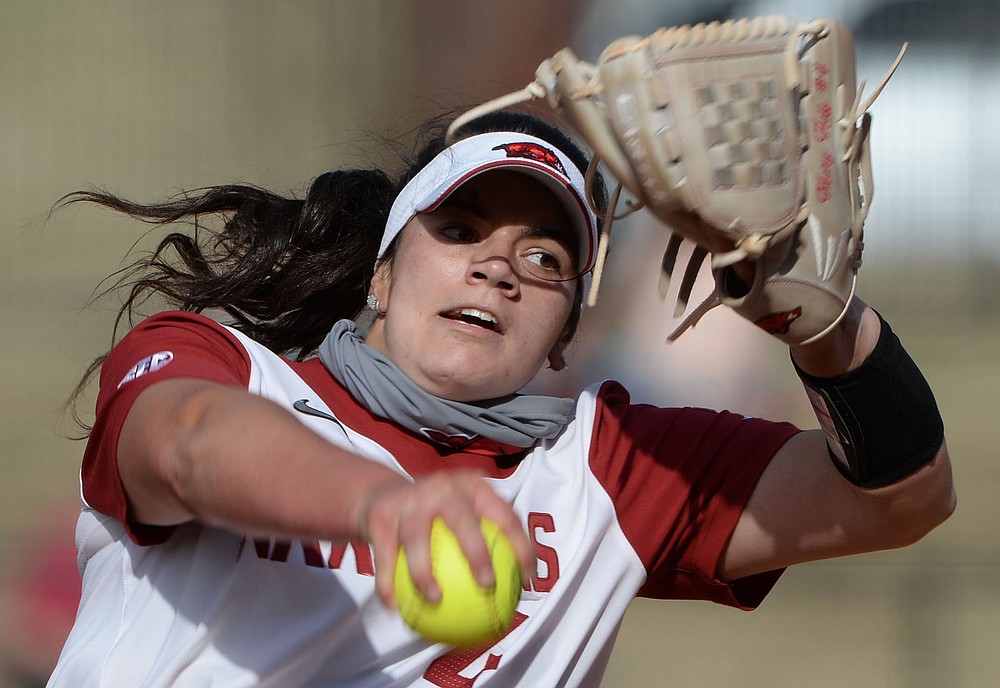 Arkansas pitcher Mary Haff suffered her third loss of the season Friday after allowing all 5 Alabama runs on 6 hits with 3 strikeouts over 32/3 innings of the No. 8 Razorbacks’ 5-3 loss to the No. 3 Crimson Tide at Bogle Park in Fayetteville.
ADVERTISEMENT