Spending focus would be on education, health, climate by Compiled Democrat-Gazette Staff From Wire Reports | April 10, 2021 at 4:31 a.m. 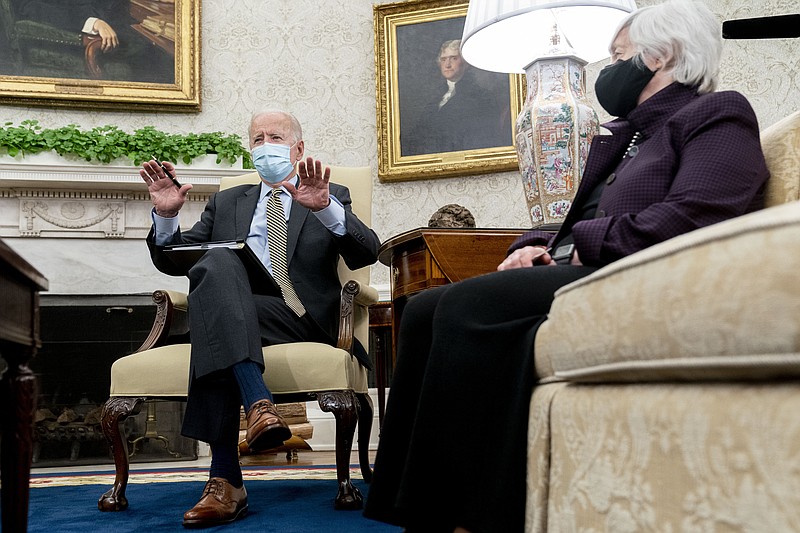 President Joe Biden gets a weekly economic briefing Friday from Treasury Secretary Janet Yellen in the Oval Office of the White House. The discretionary spending plan he presented to Congress on Friday met with a mixed reception that highlights a budget process that remains unsettled in the aftermath of the Trump administration. (AP/Andrew Harnik)

The request marks Biden's first discretionary spending proposal, a precursor to the full annual budget he aims to release later in the spring. The early blueprint calls for a nearly 16% increase in funding across nondefense domestic agencies, reflecting the White House's guiding belief that a bigger, better-resourced government can help address the country's most pressing political and economic challenges.

Many of the programs Biden seeks to fund at higher levels starting in October are initiatives that President Donald Trump had tried to slash. In a further break with Trump, who labored to spend sizable sums on defense, Biden's plan calls for a less than 2% increase for the military in the upcoming fiscal year.

"I'm hoping it'll have some bipartisan support across the board," Biden said of his wish list before an Oval Office meeting with his economics team.

But the administration's approach quickly divided lawmakers. Senior Senate Republicans accused the president of trying to shortchange the Pentagon, which they alleged would put the country at a disadvantage against China. Sen. Bernie Sanders, I-Vt., and other progressives demanded deep cuts to the military's budget, though they endorsed the domestic investments that Biden put forward.

[Video not showing up above? Click here to watch » https://www.youtube.com/watch?v=rbMZPOrSV7g]

The mixed reception illustrates the balancing act Biden faces as he tries to navigate a Washington budget process that remains unsettled in the aftermath of the Trump administration. Democrats notched numerous spending victories during the Trump administration because Republicans kept capitulating on demands for spending controls. Biden, Republicans and congressional liberals are expected to test one another in the coming months as they debate a budget plan ahead of October.

At stake is "discretionary spending," roughly one-third of the federal budget that is passed by Congress each year, funding the military, domestic Cabinet department operations, foreign policy and homeland security. The rest of the budget involves so-called mandatory programs with locked-in spending, chiefly Social Security, Medicare and Medicaid.

Under Biden's proposal, the Education Department would receive a roughly 41% increase over its current allocation, reaching $102 billion next fiscal year, with most of the new funds targeted for the Title I program, which funds high-poverty schools. The proposal would double federal spending on the Title I program and represent the largest increase since it was created more than 55 years ago.

The plan also proposes a roughly 23% boost to the Department of Health and Human Services, including more than $8.7 billion for the Centers for Disease Control and Prevention, which the administration says is the highest funding level for the public health agency in two decades.

It would create a new federal agency under the National Institutes of Health, called the Advanced Research Projects Agency for Health, focused initially on innovative research on cancer, diabetes and Alzheimer's disease.

The budget envisions nearly $69 billion in federal money toward addressing public housing, a 15% increase from the amounts enacted in 2021, to help low-income families access affordable housing. And the Biden administration hopes to set aside $14 billion in new sums across government to protect the environment, including efforts to reduce carbon emissions and research clean-energy technology.

"Together, America has a chance not simply to go back to the way things were before the COVID-19 pandemic and economic downturn struck, but to begin building a better, stronger, more secure, more inclusive America," the White House's acting budget chief, Shalanda Young, said in a letter accompanying the blueprint.

The White House set off what is an annual, often bitterly partisan fight in Washington, as lawmakers race to fund the government before the current spending agreement expires at the end of September. The vast increases Biden seeks are in addition to the $1.9 trillion coronavirus aid package that he signed into law last month and the roughly $2 trillion plan to upgrade the nation's roads, bridges and other infrastructure that the White House asked Congress to adopt last week. In total, the budget would increase all federal discretionary spending by roughly 8% in 2022.

But setting federal spending at such high levels may prove difficult for Democrats, who maintain only narrow majorities in the House and Senate. They probably will have to rely on Republicans, who maintain filibuster power in the Senate, to fund the government. And some GOP lawmakers already have shown a renewed interest in tightening the federal purse strings -- and addressing the budget deficit -- after largely ignoring the issue during Trump's presidency.

On Friday, Senate Minority Leader Mitch McConnell, R-Ky., joined a group of Republicans to lay down an apparent early marker over Biden's proposal for the military. The spending request seeks to allot roughly $715 billion in defense spending in the next fiscal year, far less than the 3% to 5% annual increase that some Republicans say is necessary to keep the U.S. on pace with emerging threats, including China.

"President Biden has said much about reaching across the aisle," they said. "Both parties should be able to agree that we must maintain America's edge over China. We urge President Biden to work with us in a bipartisan manner to ensure that."

Anticipating the fight ahead, a senior administration official acknowledged Friday that this is only "the beginning of a long appropriations process" on Capitol Hill. But the aide said the document serves as a "great marker" of the White House's priorities -- and its belief that the country in recent years has underinvested in domestic agencies and programs.

For the past decade, Democratic and Republican presidents alike have been beholden to spending caps as a result of a budget-balancing law Congress adopted in 2011. That has taken its greatest toll on domestic agencies, limiting federal spending across government even as defense funding continued to rise. But those caps expire entering the 2022 fiscal year, allowing Biden broad latitude to seek major increases in areas including education, commerce, energy and health.

White House press secretary Jen Psaki said the administration was "inheriting a legacy of chronic underinvestment" because of the caps. "The president is focused on reversing this trend and reinvesting in the foundations of our strength," she told reporters at a briefing.

"With austerity caps and an era of chronic disinvestment finally behind us, Congress can turn this proposal into a budget that will help generate a stronger, fairer economy, while truly meeting the needs of our communities," Rep. John Yarmuth, D-Ky., chairman of the House Budget Committee, said in a statement.

Under Biden's blueprint, the country would spend $769 billion on nondefense programs. The education dollars include new boosts to Pell grants, which offer support to low-income college students, though the $400 increase the president has proposed for students each year is smaller than the amount he initially endorsed on the campaign trail. The budget proposal also would expand government-supported child-care programs and add money to hire more counselors and mental-health professionals at schools.

Other new funding is directed at the Department of Housing and Urban Development, which would have a major expansion of voucher programs that might help more than 200,000 families obtain assistance, the administration estimates. And the budget aims to boost climate-change-focused programs, including the Environmental Protection Agency. Aiming to reverse cuts at the EPA over the past decade, the Biden administration has requested a roughly 21% increase in its funding, which would support a new, $936 million "environmental justice initiative" that promises to "hold polluters accountable."

Some of the budget proposals seek to expand initiatives enacted under the $1.9 trillion stimulus, the American Rescue Plan. They include new money to help homeless families and veterans, and new federal funding for public health programs targeting racial and ethnic minorities.

The budget also proposes roughly $100 million to aid states so they can further improve their unemployment benefits systems in the wake of crushing demand earlier in the pandemic.

Other proposed increases track long-held Democratic policy priorities. There's more money proposed for policing changes and changes to the criminal-justice system, for example, and other new investments -- totaling $2.1 billion -- to try to combat gun violence. And the Biden administration has recommended a significant increase in funding to fight the opioid epidemic, hoping to devote $10.7 billion to the cause next fiscal year.

Information for this article was contributed by Tony Romm of The Washington Post and by Josh Boak of The Associated Press. 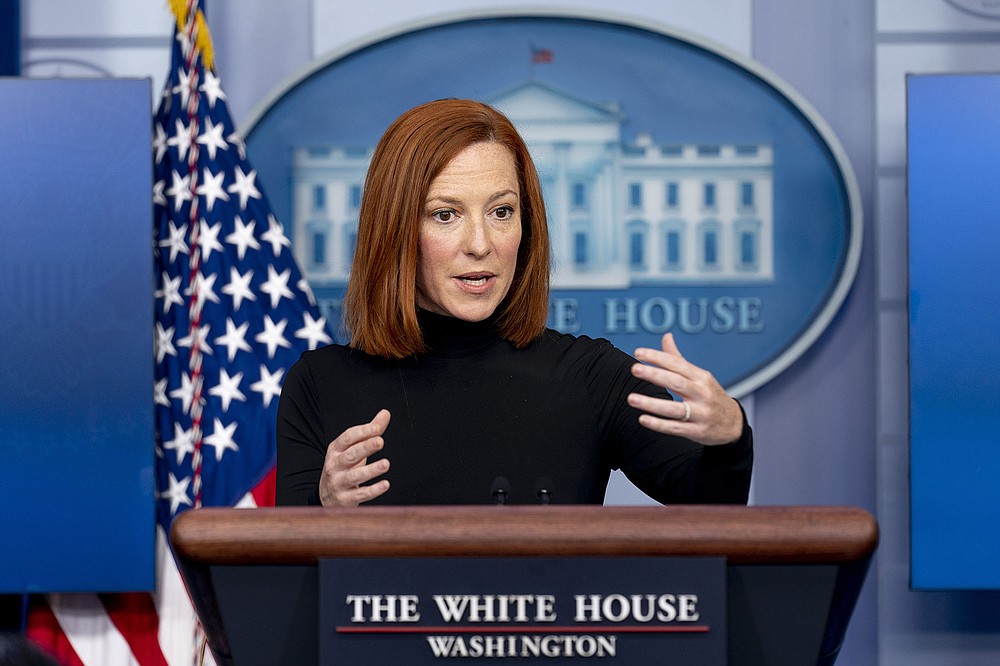 White House press secretary Jen Psaki said Friday that the Biden administration was “inheriting a legacy of chronic underinvestment” because of spending caps adopted by Congress in 2011. (AP/Andrew Harnik)
ADVERTISEMENT