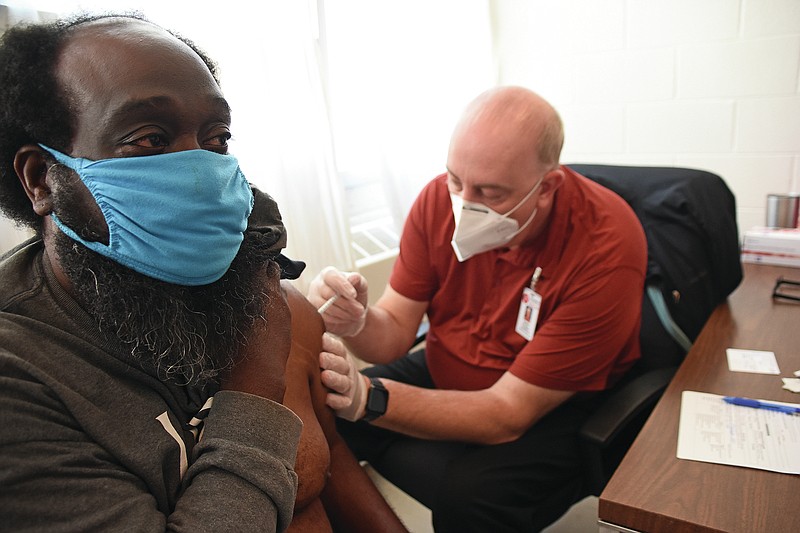 The proportion of Arkansans who have received at least one coronavirus vaccine dose topped 30% on Friday -- a day that was also the first one since November that the state did not report any new covid-19 deaths.

Despite those milestones, the decline in new coronavirus infections in the state showed further signs of stalling as the number of people hospitalized with the virus jumped by 19.

Also on Friday, the Department of Health said a covid-19 case caused by the more-transmissible variant from Brazil was identified in Arkansas this week for the first time.

Meanwhile, the state Department of Corrections announced that it would begin allowing visitors at six more prisons late next week under a pilot project that resumed at four other prisons last month.

Department spokeswoman Cindy Murphy said the department will begin vaccinating inmates after it receives a shipment of 7,300 doses of the Moderna vaccine next week.

Also on the vaccine front, state Epidemiologist Jennifer Dillaha said that, after dropping by 88%, to 5,200 doses, next week, Arkansas' weekly allotment of the single-shot Johnson & Johnson vaccine will drop even further, to 1,700 doses, the following week.

"It will be probably at that level for the next few weeks before it goes up again," Dillaha said.

The reductions followed news that a manufacturing error at a plant in Baltimore caused 15 million doses of the vaccine to be discarded and production to be halted while the U.S. Food and Drug Administration investigates the matter.

The state count of virus cases rose Friday by 178, an increase that was smaller than the one the day before but larger, by 34 cases, than the one a week earlier despite lower testing numbers reported by the Health Department.

The number of hospitalized virus patients rose to 160, its highest level in a week.

The state death toll from the virus, as tracked by the Health Department, fell by one, to 5,661.

Health Department spokesman Meg Mirivel said one death that was reported earlier was determined to be unrelated to covid-19.

No new deaths were reported, she said.

"We have administered 154,000 more vaccines doses since last week," Gov. Asa Hutchinson said in a statement. "36% of Arkansans 16 and older have received at least one COVID-19 shot. That's encouraging, but to achieve community immunity and beat COVID-19, we must increase those numbers."

The number of state virus patients on ventilators remained unchanged at 23.

According to the U.S. Centers for Disease Control and Prevention, the number of Arkansans who have received at least one vaccine dose rose by 14,019, to 911,997, representing about 30.2% of the state population.

Arkansas continued to rank near the bottom of states in those measures, however.

Among the states and District of Columbia, Arkansas' percentage of residents who had received at least one vaccine dose remained the 42nd-lowest.

It also continued to rank 47th in the percentage of residents who had been fully vaccinated.

Nationally, 34.5% of people had received at least one vaccine dose, and 20.5% were fully vaccinated.

Friday was the first time since Nov. 27, the day after Thanksgiving, that the state did not report any new deaths from covid-19.

But after hitting a low for this year of 151 on April 2, the average number of cases added in the state over a rolling seven-day period has fluctuated at a slightly higher level, rising to 161 as of Friday after a slight dip the previous day.

Dillaha said she's concerned by the apparent plateau in the daily case increases because of the presence of more-transmissible variants in the state.

In addition to the variant from Brazil, the state has identified eight cases of the variant discovered in the United Kingdom and 11 cases of two variants from California.

Of those, the United Kingdom variant is the most worrisome because it "appears to confer an increased risk for severe disease and death," Dillaha said.

"I am concerned that, if we are not able to maintain low spread of covid-19 in Arkansas, that this variant will also become predominant here, and we would see increases in hospitalizations even though we may not see the increase in cases that we have seen previously in our state," Dillaha said.

The actual number of covid-19 cases caused by variants in Arkansas is unknown because only a small percentage of specimens are tested for that.

Dillaha said the increase in hospitalizations on Friday could have been caused by people who were infected during gatherings over Easter weekend "and then rapidly got sick."

Limited visits resumed last month at the Benton Unit work-release program, the Delta Regional Unit in Dermott, the Northeast Arkansas Community Correction Center in Osceola and the Northwest Arkansas Community Correction Center in Fayetteville as part of a pilot project that started in December but was suspended later that month when a rise in cases caused the prison system to go on "lockdown."

The visits must be for immediate family members and are by appointment only.

A Health Department report on Monday listed 56 inmates across state prisons as having tested positive within the previous two weeks.

Thirty-six of the infections were identified at the Ouachita River Unit in Malvern, where inmates are transferred from county jails before being sent to other prisons.

Corrections Department spokeswoman Cindy Murphy said the prison had eight new cases among inmates on Friday and a total 41 that were active.

She said the department's health care vendor, Wellpath, will administer the Moderna doses to inmates at on-site clinics.

"We're working with the Health Department on how to handle distributing vaccine to any inmates who are released before it's time for them to receive a second dose," Murphy said.

The Health Department had planned to use the Johnson & Johnson vaccine for inmates but changed plans after its allotment of that vaccine was reduced.

Of the 5,200 doses of Johnson & Johnson the state is set to receive next week, 200 will go to the Southeast Arkansas Human Development Center, a facility in Warren that houses people with severe developmental disabilities.

The rest will go to Health Department local health units.

Dillaha said some of the doses will be used for clinics in Sebastian, Miller, Crittenden and Lincoln counties. Others will be used to vaccinate the homeless and county jail inmates, she said.

Arkansas Pharmacists Association CEO John Vinson said he's heard from some pharmacists who are cutting back on the amount of vaccine they're ordering from the state and from others who are increasing it.

"They're not out of appointments or completely out of patients, but it's slowing down for them."

In other areas, pharmacists have "not only full clinics, but increased demand," he said.

The business group still will be able to administer up to 2,500 doses of Pfizer vaccine at a clinic on Thursday at Northwest Arkansas Mall in Fayetteville, but it reduced the hours for a clinic on Friday at J.B. Hunt's headquarters in Lowell, where it plans to administer only up to 1,500 to 1,600 doses, council spokesman Nate Green said.

"I think the demand is down for everyone," Green said.

"It seems like what I'm hearing is other clinics around the region are not filling up either."

Depending on the turnout next week, he said the council may try holding future clinics on weekends or evenings, possibly just holding one event per week instead of two.

The council has budgeted $125,000 on an advertising and public relations campaign to encourage people to get vaccinated.

"Media buy ramped on [Monday] with billboard, TV, radio and digital," Green said in an email. "We are working on a new TV ad campaign to focus on both vaccine safety and to promote the clinics."

Benton County Emergency Management Director Michael Waddle said about half the 1,000 appointment slots for a weekly clinic at the county fairgrounds in Bentonville scheduled for Wednesday had been filled as of Friday.

He said he expects the remaining slots to fill up. If they don't, he said he may announce walk-in hours.

University of Arkansas for Medical Sciences spokeswoman Leslie Taylor said just over 500 people had signed up for a clinic today at Simmons Bank Arena in North Little Rock, where organizers hope to vaccinate 1,000 people.

The registrations are "lower right now then we had hoped, but they're still continuing, and if folks walk in we'll take care of them," Taylor said.

Taylor said 320 of the 500 available appointment slots for that clinic had been filled as of Friday.

She said the university's mobile health unit vaccinated about 240 people on Wednesday at Henderson State University in Arkadelphia and 28 people Friday in Paron.

The unit has clinics planned next week at the Conway Human Development Center, Northwest Arkansas Community College in Bentonville, Helena-West Helena and the University of the Ozarks in Clarksville.

This week, UAMS' Northwest Arkansas campus started a daily drive-thru clinic that vaccinated about 100 people per day. Taylor said that will increase next week to 200 a day.

She said UAMS also is working to get vaccine doses to its other regional campuses, which are in Texarkana, Helena-West Helena, Pine Bluff, Magnolia, Batesville, Jonesboro and Fort Smith.

The cases that were added Friday in the state included 120 that were confirmed through polymerase chain reaction, or PCR, tests.

The other 58 were "probable" cases, which include those identified through less-sensitive antigen tests.

The number of cases that were considered active rose by 25, to 1,732, as new cases outpaced recoveries.

The Health Department didn't report any increase in its count of cases among prison and jail inmates.

The number of people who have ever been hospitalized in the state with covid-19 grew by nine, to 15,497.

The number of state virus patients who have ever been on a ventilator with covid-19 remained unchanged at 1,594.