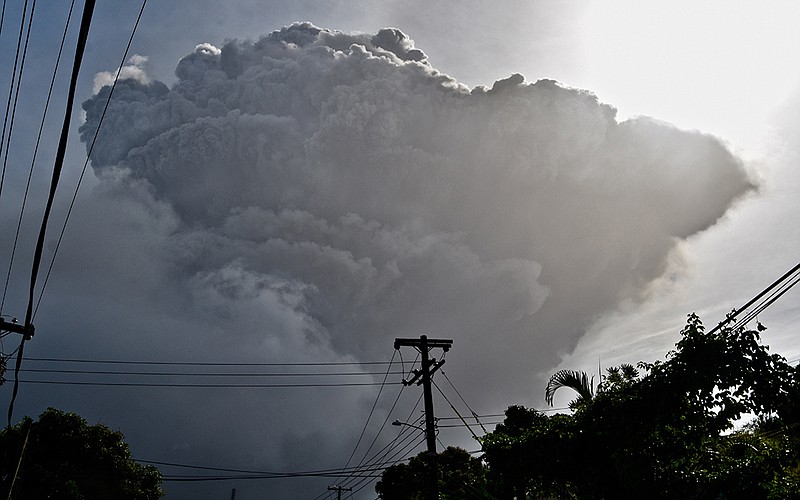 There were no immediate reports of casualties. The eruption was four days short of the 42nd anniversary of the previous sizable eruption.

Experts said Friday's ash column rose more than 20,000 feet high -- 3.8 miles -- and that the majority of the ash was headed northeast into the Atlantic Ocean.

However, heavy ash-fall also was reported in communities around the volcano, and poor visibility hampered some evacuations, authorities said.

"More explosions could occur," Erouscilla Joseph, director of the University of the West Indies Seismic Center, said in a phone interview, adding that it was impossible to predict how big they'd be.

"Once it has started, it's possible you could have more explosions," Richard Robertson, a professor of geology at the University of the West Indies, said at a news conference Friday. "The first bang is not necessarily the biggest bang this volcano will give."

[Video not showing up above? Click here to watch » https://www.youtube.com/watch?v=M31zUWHiXlA]

In the coastal town of Barrouallie, about 9 miles from the volcano, evacuees trudged toward shelters carrying backpacks, duffel bags and shopping bags stuffed with personal belongings. Some prepared to stay there, while others expected to board cruise ships or go to nearby islands that have offered help.

Others, including members of one family who stood for an hour in the sun with their suitcases by the side of a road, waited for transportation to a shelter.

Friday's eruption followed mandatory evacuation orders issued Thursday for the roughly 16,000 people who live in the red zone near the volcano in the island's northern region. More than 2,000 people were staying in 62 government shelters.

"We have had hiccups here and there ... but by and large we are proceeding pretty well," Prime Minister Ralph Gonsalves said at Friday's news conference. He later wiped tears from his eyes and apologized for crying while he thanked people and other governments in the region for opening their homes and countries to St. Vincentians.

"On the dangerous road to Jericho, we have the Good Samaritans," he said. "It brings home that we are one Caribbean family."

He said, depending on the damage, it could take up to four months to get things back to normal.

Adding to officials' worries is the pandemic and whether people would leave their homes for crowded shelters.

"The covid pandemic is still ongoing, and you're talking about moving people for what may be weeks, possibly months," Joseph said in a phone interview. "This is a huge cost in terms of a humanitarian effort."

Gonsalves said people have to be vaccinated if they go aboard on a cruise ship or are granted temporary refuge on another island. He said two Royal Caribbean and two Carnival Cruise Lines ships arrived Friday. Islands that have said they would accept evacuees include St. Lucia, Grenada, Barbados and Antigua.

Gonsalves added that he highly recommends that those who opt to stay in a shelter in St. Vincent and the Grenadines, an island chain of more than 100,000 people, be vaccinated.

"We don't want to have an outbreak of covid in the shelters," he said.

He also said workers were trying to reduce the risk of infecting older people and those with disabilities by putting them in guesthouses when possible.

Authorities said those staying in shelters would be tested for covid-19 and anyone who tests positive would be taken to an isolation center.

Gonsalves said he was talking to Caribbean governments to accept people's identification cards if they don't have passports.

"This is an emergency situation, and everybody understands that," he said.

Emergency management teams have been going out to communities in the red zone and providing transportation to safer locations, including shelters, Joseph said.

By late Thursday evening, lights from evacuees' vehicles making their way to safer ground twinkled through the darkened mountains as shelters began to fill up.

John Renton, a school principal who was in charge of one shelter, said in a phone interview that the facility had plenty of masks and other personal protective equipment but needed more cots. While talking, he was interrupted by a phone call from a government official asking about the state of things. "We're overcapacity," he responded, noting that the shelter could hold 75 people and was already full.

The government warned of water shortages given that people began stocking up after the alert was issued.

Early Thursday, scientists alerted the government about a possible eruption after noting a type of seismic activity at 3 a.m. that indicated "magma was on the move close to the surface," Joseph said.

In December, a team from the seismic center went to St. Vincent after the volcano had an effusive eruption. They have been analyzing the formation of a new volcanic dome, changes to the volcano's crater lake, seismic activity and gas emissions, among other things.

Seventeen of the eastern Caribbean's 19 live volcanoes are on 11 islands. The remaining two are underwater near the island of Grenada, including one called Kick 'Em Jenny that has been active in recent years.

The region's most active volcano in recent years has been Soufriere Hills in Montserrat, which has erupted continuously since 1995, destroying the capital of Plymouth and killing at least 19 people in 1997.

Some still vividly recall La Soufriere's eruption in 1979, which hurled debris thousands of feet but caused no deaths thanks to a hastily arranged evacuation to the beaches. Its ash reached as far as Barbados, 100 miles east.

Cecilia Jewett, 72, a roads supervisor with the government of Saint Vincent and the Grenadines, said she made it through the 1979 eruption and recalled people's panic, their desperate scramble for water, the sky darkened by ash and the overpowering stench of sulfur.

Her father, she said, survived the deadly 1902 event, and told stories of victims buried in ash and corpses lying in the streets.

"Those stories come back to my mind on hearing that the La Soufriere was acting up," she recalled in December. "It's just too much. These young people would not understand. They think it's just an explosion."

"The sulfur, what it does to your eyes, your breathing, your very existence," she said. "It was a time I would not want to relive."

Information for this article was contributed by Danica Coto of The Associated Press; and by Ernesto Cooke and Oscar Lopez of The New York Times. 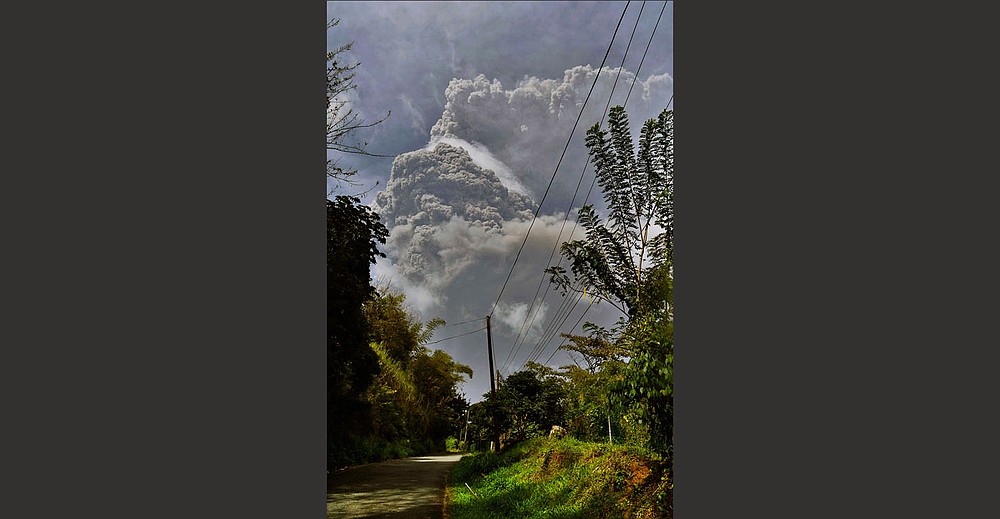 Volcanic ash threatens an area near the La Soufriere volcano Friday on the Caribbean island of St. Vincent. More than 2,000 people were staying in 62 government shelters, and officials worried that the pandemic could hamper further evacuation efforts. (AP/Orvil Samuel) 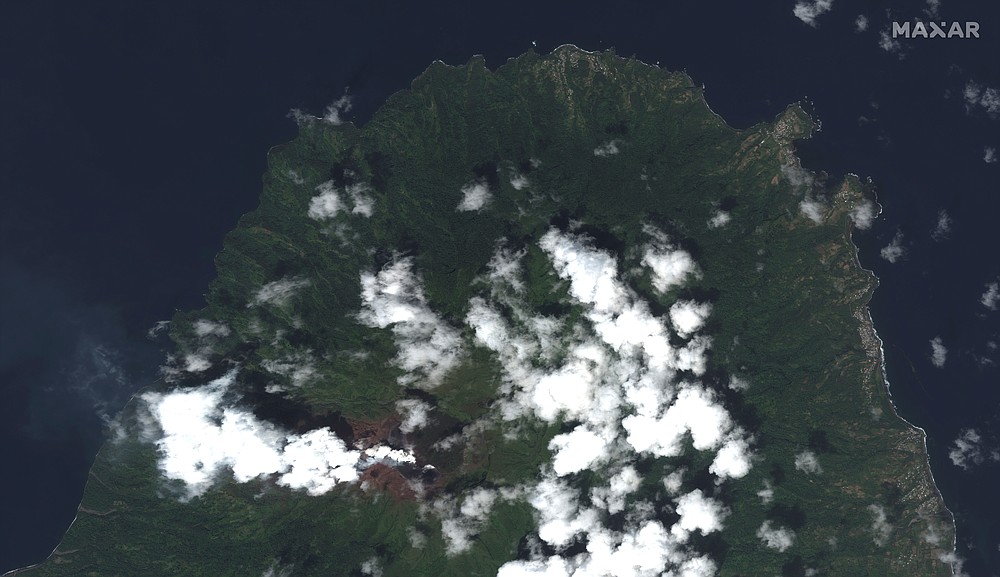