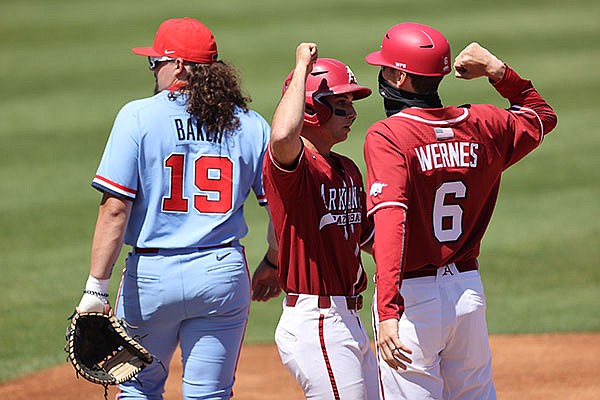 Arkansas took the series, sole possession of the SEC West and likely the No. 1 national ranking from Ole Miss on Sunday.

Brady Slavens and Christian Franklin had RBI hits with two outs in the eighth inning to give Arkansas the lead, and the Razorbacks tacked on a run in the ninth to hold on for an 18-14 victory at Swayze Field.

Slavens’ two-run double scored Braydon Webb and Matt Goodheart after both players walked, and gave the Razorbacks a 16-14 lead. Slavens scored to extend the lead to 17-14 on Franklin’s RBI single with two strikes.

“Just a great win for our team,” Arkansas coach Dave Van Horn said. “We got out to a big lead (but there was a) big crowd here, wind blowing out a little bit, so you knew no lead would be safe. They have an outstanding offense, Ole Miss.

“We fought them, they fought back and tied it up, obviously. There was no quit in the dugout.”

“It’s a good feeling,” Van Horn said. “Gosh, you don’t want to play a 4-hour, 25-minute game and lose and come all the way home on a bus. It’s going to make that trip a lot better.

“Tomorrow when we wake up, we'll probably think about this a little bit and how we hung in there and found a way to win two out of three down here. We’ve played Mississippi State, Ole Miss, Alabama — we’ve played a lot of games in our division and we’ve done pretty well.”

Ole Miss coach Mike Bianco, whose team split a doubleheader on Saturday, was ejected in the fifth inning for arguing balls and strikes. The Rebels walked 17 and also hit two Arkansas batters.

“I can’t remember a day we were that bad on the mound,” Bianco said.

Van Horn said he could not recall a game as crazy as Sunday's.

“I tried to think back during the game of a game like this, how I handled it or what happened and I really couldn’t come up with one,” Van Horn said. “It has probably been a long time if it had. It was a rollercoaster to say the least. It was baseball, which sometimes get out of control. I just glad we punched in that last field goal and got that lead up there a little bit.”

Arkansas pinch hitter Jacob Nesbit singled to lead off the ninth inning and scored the game’s final run on a fielding error by Ole Miss relief pitcher Luke Baker. The Razorbacks loaded the bases with no outs after Nesbit’s run, but failed to score another run when Cayden Wallace hit into an inning-ending double play.

“I thought that run in the ninth was big to give us a four-run cushion,” Van Horn said. “ A little disappointed we didn't score more runs there. Bases loaded, no outs and we did not score any more, but it ended up being enough. Great job by Kevin Kopps coming in and giving us some hope at the end and then finishing it up."

Kopps worked around a two-out base runner in the bottom of the eighth inning. He walked the leadoff batter and gave up a single to Hayden Leatherwood with no outs in the ninth, but struck out the Rebels’ No. 9, 1 and 2 hitters — Calvin Harris, Jacob Gonzalez and Peyton Chatagnier — to leave runners on the corners.

“Well, obviously we just needed to get the first out,” Van Horn said. “They had runners on first and third with nobody out and you’re thinking, ‘Wow, this is gonna be tough.'

“For him to get that first out that was big. I think he caught his breath and then went to work. He got ahead of the hitters and when get ahead of them, he can start cutting it, spinning it, whatever he wants to do there and that’s what he did."

Kopps pitched three innings and threw 47 pitches to earn his fifth win. He allowed 4 hits and 1 walk, and struck out 5.

“We just wanted to keep him under 50 pitches and that's about what he ended up with,” Van Horn said.

The Razorbacks went to Kopps, the ace reliever who threw 41 pitches in the first game of a doubleheader Saturday, but he couldn’t preserve the lead.

Kopps allowed RBI singles to Ben Van Cleve and Leatherwood, and gave up a run of his own on Harris’ fielder’s choice RBI. It was the first run allowed by Kopps since Feb. 28. He had thrown 19 2/3 consecutive scoreless innings entering the game.

After Ole Miss added a run in the fifth inning, Arkansas extended the lead to 14-6 with a three-run sixth. Jalen Battles had an RBI single with one out and the Razorbacks pushed home two more runs when Robert Moore walked and Matt Goodheart was hit by a pitch with the bases loaded.

Arkansas appeared to be in cruise control with a five-run second inning and a six-run third.

Cullen Smith hit a three-run home run and Braydon Webb hit a two-run homer to give the Razorbacks a 5-0 lead in the second. All five runs came against Ole Miss starter Derek Diamond, who was taken out of the game after 1 2/3 innings.

Franklin robbed Ole Miss of a two-run home run to end the second inning. Leatherwood hit the ball well to the wall, but Franklin made a leaping catch to preserve the 5-0 lead.

Ole Miss reliever Josh Mallitz allowed five of the six runs in the third. Battles and Goodheart had RBI hits, and Moore had a sacrifice fly to chase Mallitz. The Rebels’ second reliever, Wes Burton, inherited two base runners and Cayden Wallace hit a three-run home run on his second pitch to give the Razorbacks an 11-0 lead.

Arkansas was out-hit 14-13, but the Razorbacks’ five pitchers walked only six against a tight strike zone. Ole Miss finished the three-game series with 46 hits.

Arkansas won a road series over a potential regional host for the third time this season and improved to 10-2 in games away from home against Ole Miss, Mississippi State, Louisiana Tech, Texas, TCU and Texas Tech — teams that are all ranked this week.

“We just kept fighting,” Van Horn said. “ We’ve been doing this all season. We’re past the halfway point. We fought back, we’ve let some leads slip away. We’ve come back and won games. So we’ve been through a lot. I don’t think they get too rattled.

“I think everybody thought, obviously, when they scored those three runs that tied it up 14-all we’re like ‘Wow, how did that happen?’ But you know we just walked up and down the dugout and said, ‘Hey, it’s fine. We’ve got two innings left. The game is tied. Let’s win the last two innings and get out of here.'"