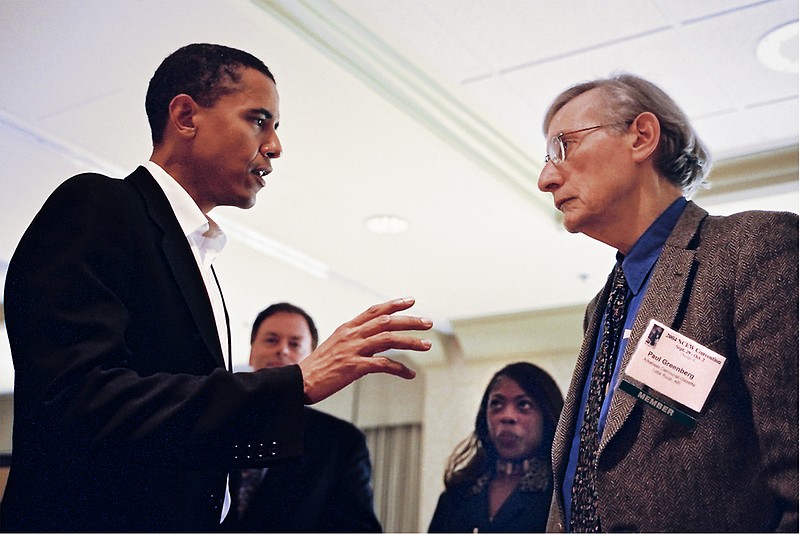 Paul Greenberg would have hated this editorial.

Many a time we'd hand in a navel-gazing piece about some topic using too many personal pronouns and he'd say: "The reader doesn't care, boy. It's not about us! It's about them!" The reader was always the focus for Paul Greenberg.

But, it should be said, he didn't reflect the opinion of his readers. He led it. How many times did his fans in Arkansas, or the nation, or the world, put down a column and think they were better people for having read it?

He was a master of reasoning, with a style that helped you up the ladder, into the boat that he was steering, navigating the currents and eddies of right and wrong. Often was the time that we'd pick up the phone with a Christopher Hitchens or a Tony Snow or some other world-renowned writer on the other end, trying to pick the brain of Paul Greenberg.

Not "Mr. Greenberg," as his co-workers tried to call him. He much preferred just Paul. Some of the ladies in the opinion section, being much, much younger, called him "Mr. G"--perhaps being uncomfortable with calling him by his first name. A true gentleman, he let that slide.

There are so many things to say about Paul that we scarcely know where to begin. How about his manner, and manners. One story sticks out:

It was back during the Iraqi War II. Paul came bouncing into work one morning, whistling a tune, and popping his suspenders. A couple of his writers were reading the wire over each other's shoulders. He asked what was up. One of us replied that a helicopter had just gone down in Iraq, and American fatalities were high. He stopped cold. No more bouncing or whistling.

Under his breath he muttered a curse--a minor curse, not one of the big ones--and walked back to his office, his morning ruined. The reason this story sticks out after all these years: It was the first time, and last time, we ever heard him say a word like that, and it wasn't even a Top 5 cuss. In a newsroom, this is not a virtue to be sneezed at.

This is not to say that Paul Greenberg couldn't be severe. But only in his editing. There were times too numerous to count in which a writer would give him a "brilliant" piece with Pulitzer written all over it, only to have the old boy mark it up with three kinds of ink, making the pages look like a road map.

But somehow, what appeared for Gentle Reader in the next morning's paper was only made better for it. Much, much better. He didn't mind being severe, as long as the page improved. And your opinion of our opinion was made better, too.

Doubtless you'll read about all of Paul Greenberg's many honors, including one Pulitzer and others barely missed. We'll leave the résumé stuff to the newsroom. Today, we just can't help but think of the man behind the column mugshot.

As hard as it is to believe, he was once a boy. We were reminded of that last by rereading (and re-publishing) a column he had written years ago about his first day of school and a cheese sandwich he had for lunch. Just reading his prose again lifts our spirits. Oh, if we could write like that! But of course, nobody can. We think we'll find a dead-tree paper in the newsroom, cut out that column, and save it in a book. Like so many of his other columns have been so collected by admirers over the years.

Paul Greenberg could laugh like a school child. And he could stew like any other man. He also made the best columns and editorials about the mistakes he'd made in life. (He once laughed when one of us asked him if he'd ever endorsed anybody he'd have regrets about later: "Nixon!") He told us frequently that nobody ever learns as much from success as they do from failure. He hated to brag, he said, but he had had lots of failures.

He told the story of debating a preacher from Arkansas when Roe v. Wade was first in the news. The preacher tried to tell him that the ruling would end up causing the deaths of millions of babies. Paul said that wasn't likely--abortion would only be used in extreme and rare circumstances, and it would not become another form of birth control, as his friend insisted.

It turned out that Mike Huckabee was right, and Paul Greenberg was wrong. That once.

The memories are flooding by so fast we get swept away: That time that a post-presidency Bill Clinton was in town, taking only written questions from the public at some forum, and Paul thought about submitting a list from the editorial page. And when the questions weren't asked (obviously) we'd publish them here in the next day's paper!

That time in an interview with a politician when the duly elected official said, "Mr. Greenberg, I know you think I'm stupid, but . . . ." And Paul just let the statement stand for an uncomfortable few seconds before the politician managed to complete the thought. Paul explained to us later that the politician had said he knew something to be certain, and Paul wouldn't be so rude as to contradict him.

That time The Onion "quoted" him. And made his year.

That time Walter Hussman offered him a job, and he said he immediately went home to tell his family: "The worst thing has happened! I've been offered the opportunity of a lifetime!"

That time, that time.

That time we read his column about the cheese sandwich in the school cafeteria. And thought how strange it was that Paul Greenberg was ever a boy. And how he, in turn, might think it strange that anybody would want to call him "Mr. Greenberg."

The world is a better place having had Paul Greenberg in it, guiding the rest of us, and holding to his memory as we prepare to go on without him. We will try to keep the focus on the reader, sir. As you insisted.

Rest in peace, friend. We already miss you. 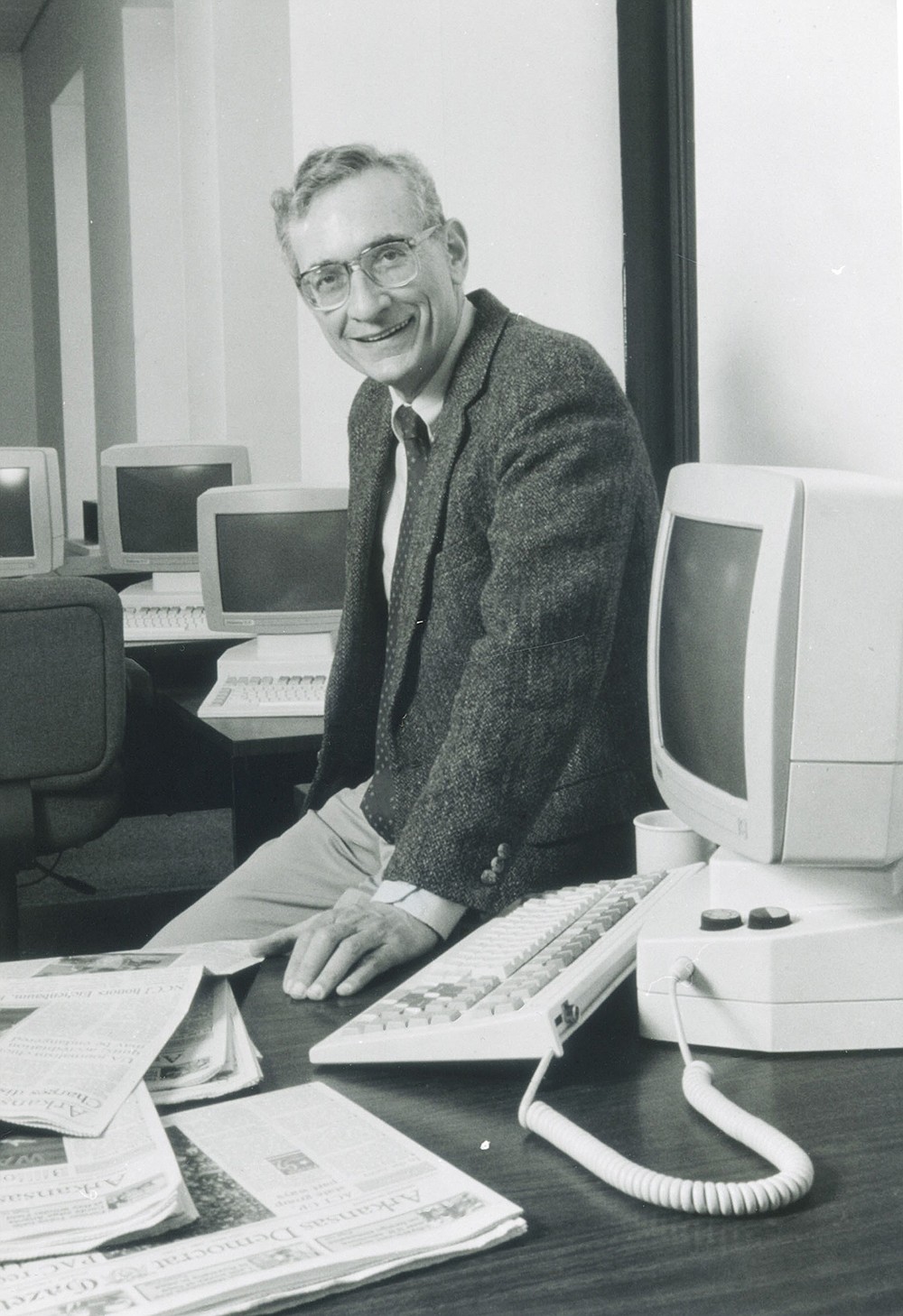 Paul Greenberg said his first job away from college was with the Pine Bluff Commercial. Hired in 1962 at age 25, he said he thought he would spend a year at the job. He stayed on for decades, winning the Pulitzer Prize in 1969 for editorials about civil rights. (Democrat-Gazette file photo)
ADVERTISEMENT