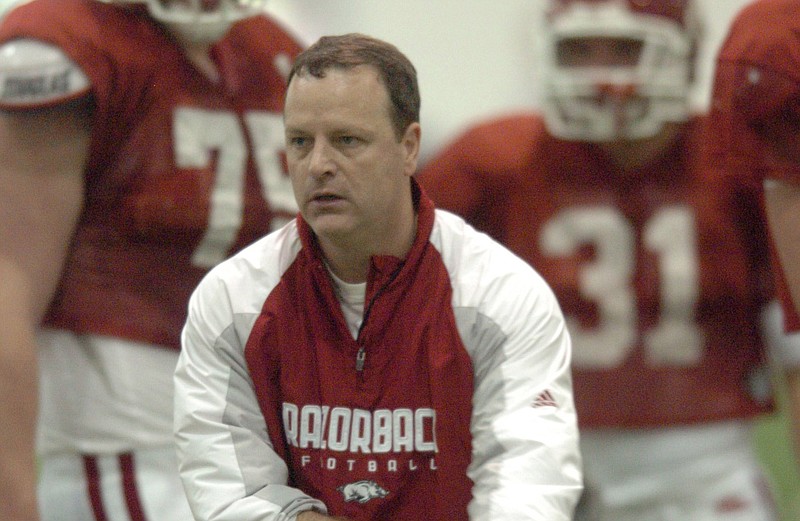 Tim Horton, who served as running backs coach at Arkansas from 2007-12, watches the team run drills during a 2009 practice. Horton was known for excelling as a recruiter and forging lasting relationships with players. (Arkansas Democrat-Gazette file photo)

FAYETTEVILLE -- Tim Horton is thankful for many things that led to his induction into the Arkansas Sports Hall of Fame.

His relationships with his University of Arkansas teammates, his fellow coaches, the athletes who have played for him, and the families from which he recruited them stand out in the mind of Horton, 53, a legacy inductee as the son of longtime Arkansas assistant coach and University of Central Arkansas head coach Harold Horton.

Then there's the hierarchy of accomplishments for the longtime running backs coach who joined Troy Calhoun's staff at the Air Force Academy this winter for his second stint with the Falcons in Colorado Springs, Colo.

"I'm really proud of the fact that, hey, you're the team captain of the winningest class in the history of Arkansas football," Horton said. "That's a big deal.

"I'm proud of the fact that I was on two teams, coached by Coach [Ken] Hatfield, who were outright Southwest Conference champions. Arkansas has had two outright conference champions in over 50 years, so it's something that doesn't happen very often."

Horton was a standout receiver and punt returner for the Razorbacks from 1986-89 who served as captain -- along with Anthony Cooney, Elbert Crawford and Michael Shepherd -- on the 1989 team that went 10-2 and finished No. 13 in the final Associated Press poll after spending most of the year in the top 10.

The Arkansas teams Horton played on had a combined 38-11 record, the best four-year mark in school history, and never finished lower than second in the SWC.

"But aside from the wins and the losses, and you tend to remember the losses more than the wins it seems, is just the relationships with your teammates and your coaches," Horton said. "Because those things last a lot longer than a win over Texas, Texas Tech, or Houston or Baylor or Texas A&M or whoever it might have been."

Tim and Harold Horton form what is believed to be the seventh father-son combination in ASHOF history.

"We're just happy for him," said Harold Horton, who was a player, coach and administrator at Arkansas, and compiled a 74-12-5 record and two NAIA championships in an eight-year stint as head coach at UCA. "Tim has devoted his life to sports ... and I think he's most deserving because inwardly I've sen the effort he's put forth to be a good coach and a good recruiter."

Tim Horton's people skills and willingness to extend a personal touch paid off in recruiting and in developing lifelong relationships.

"He always went the extra mile in recruiting," Hatfield said. "He is so good at getting to know parents and families. He's the best I've ever seen at writing notes to different coaches, to different people.

"He could sense a moment when someone needed a little uplift. And he always took time, in this day and age of social media where it's so quick and easy to do, he would take time to write out a note."

Horton's coaching career has been marked by productive tailbacks, including the quartet of Darren McFadden, Felix Jones, Peyton Hillis and Michael Smith on the same 2007 Arkansas team. Horton also oversaw a string of standout tailbacks at Auburn from 2013-18 that included 1,000-yard rushers in Heisman Trophy finalist Tre Mason, Cameron Artis-Payne, Peyton Barber, Kamryn Pettway and Kerryon Johnson. Then he coached Ke'Shawn Vaughn to a 1,000-yard season at Vanderbilt in 2019.

Horton's six-year tenure as running backs coach at Arkansas (2007-12) included a save for which he will always be remembered by Arkansas fans.

After Houston Nutt's departure to Ole Miss after a 50-48 win at No. 1 LSU on the day after Thanksgiving in 2007, Horton salvaged a recruiting class that featured Joe Adams, Tyler Wilson, Jarius Wright, Greg Childs, De'Anthony Curtis, Chris Gragg and Dennis Johnson, one of the greatest in-state classes in school history.

"When Coach Nutt left, and basically every assistant coach left except myself and Bobby Allen, Coach [Frank] Broyles came down to my office," Horton said. "He said, 'Tim, what are you thinking?' I said, 'I want to stay here. I'm not interested in going to Ole Miss.'

"He says, 'Well, you need to spearhead and take the lead and take this recruiting bull by the horns.' He didn't have to tell me twice, that's for sure. I was very fortunate because that year was a very strong year in Arkansas."

"We were just able to keep them all in the state," Horton said. "You look back now and that was the heart and soul of a Sugar Bowl team, and the heart and soul of a team that won the Cotton Bowl. You've got to give those kids credit, because they had a lot of pride in the state of Arkansas. They wanted to make Arkansas proud and they certainly did."

Horton shared a recruiting story from that year about Wilson, the Greenwood High sensation who had been committed to Tulsa but wanted to play for the Razorbacks.

Horton drove halfway to Greenwood to meet then-Coach Rick Jones and pick up updated tapes of Wilson for Petrino to study before he would offer Wilson a scholarship.

"We brought the tape back and watched it," Horton said. "When he was watching it he got mad at me because, he said, 'I don't want a highlight tape.' I had to correct him and say, 'Coach, this is the state championship game.' He went 32 of 35 or whatever it was."

Perhaps Horton's biggest moment as a player came late in the third quarter in a game at Texas on Oct. 15, 1988.

"It was the last play of the third quarter," Hatfield said. "We were getting ready to go into the wind in the fourth quarter and it was a close ball game. We decided to throw a pass and maybe gain some yardage while we had the wind. We didn't want to be kicking a long, long field goal into the wind."

Quarterback John Bland -- in for Quinn Grovey, who had suffered a separated shoulder -- fired a long pass over the middle for Horton.

"Tim laid out. I mean he was just parallel to the ground and caught the ball on that Astroturf, which is hard anyway, and bounced a couple of times afterwards," Hatfield said.

"Maybe that catch against the University of Texas in Austin may have been a highlight that helped him get this," Harold Horton said regarding his son's ASHOF induction. "When he hit the turf, he bounced, hit on his stomach and chest, but he held onto the football."

The Razorbacks scored on Kendall Trainor's 28-yard field goal early in the fourth quarter to go ahead 27-10 in a game they won 27-24.

"He was just tough," said Grovey, who spent many a night hanging out with Horton and playing a self-created Nerf basketball game called "Tip". "There was a game ... he returned a punt and he got hit in the back. It almost ruptured his spleen. The guy was in so much pain, and he found his way back into the huddle. Just a tough guy."

The week after that win at Texas, the Razorbacks were leading Houston 19-14 in the Astrodome when Hatfield called on Grovey late in the game for a drive that was to begin at the Arkansas 5-yard line.

"We had to drive the ball 95 yards to close them out," Grovey said. "Coach Hatfield decided to put me in the game. He wanted to give the offense a little jolt, get some fresh legs in there, so he put me in.

Grovey also was screaming the same thing to his teammates.

"Tim was like, 'Man, you've got to calm down.' I was just yelling and screaming," he said. "I was cussing and fussing, there's no doubt about it.

"Tim was like, 'You're going to get a penalty.' Tim was in the eye of the storm. I probably started using some different language, but I didn't calm down. He did help me kind of refocus, and we put a key touchdown on Houston and won that game."

Horton said his induction will be special because his father and mother Betty will both be in attendance. He was a junior at Arkansas the year he introduced his father at his ASHOF induction ceremony in 1989, the same year Hatfield went into the hall.

"My dad had asked me to introduce him," Horton said. "That was special to our family. It was a special time. Arkansas had just won another Southwest Conference championship. Your dad's going into the Arkansas Sports Hall of Fame, and I got to introduce him.

"I'm really, really happy that however many years later I'm going in and he's still around to see it. He's still in real good health, and Mom's in good health. That's pretty cool for me that Dad will be there and get to be a part of something like this, just like I was in 1989."

The fourth in a series profiling inductees into the Arkansas Sports Hall of Fame Class of 2021. The induction ceremony will be held at 6:30 p.m. on Friday at the Statehouse Convention Center in Little Rock.

TIM HORTON AT A GLANCE 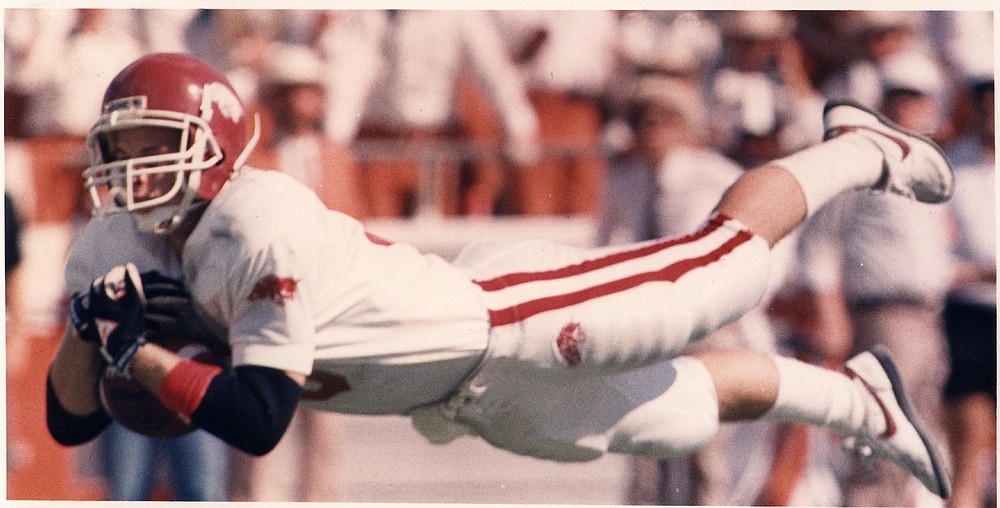 Tim Horton, who played for Arkansas from 1986-89, makes a catch against Texas in 1988. He was a two-time academic all-SWC performer and second-team All-SWC selection in 1989. (Arkansas Democrat-Gazette file photo)
ADVERTISEMENT