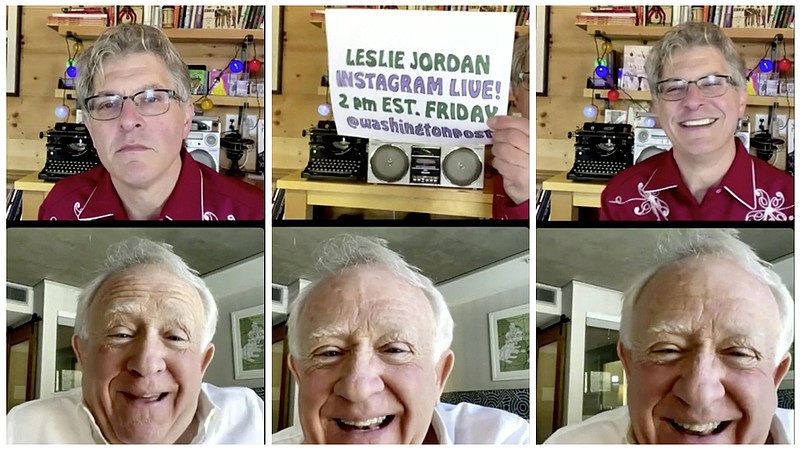 Recently, Edgers chatted with the actor and internet-famous Leslie Jordan. Here are excerpts from their conversation.

Q: So you have an album coming out this week called "Company's Comin'," featuring duets of country songs.

A: Yes, it's really a gospel album — old Southern hymns that I grew up with. When I was putting together the list of people I wanted to be on it — Katie Pruitt, Brandi Carlile, Dolly Parton, T.J. Osborne, my friend Danny Myrick, Tanya Tucker, Eddie Vedder, Travis Howard, Ashley McBryde, Charlie Worsham — not one person said no.

Q: You grew up in Tennessee at a time when country music was a very specific thing. Did you love it as a boy?

A: You know, I did, but I was a closeted country music fan because that was the time of Grand Funk Railroad and people my age listening to ...

A: Oh, I don't remember the names of all those groups. But in the end, it was hippie music. We had long hair. I looked like a little rock 'n' roll troll doll. I was about this tall with all this hair and I was listening to hippie music. But I did love country music, and I loved the old stuff with Loretta Lynn and Merle Haggard. I would listen to it on the sly.

Q: You have T.J. Osborne on your record, who is the only openly gay major country artist on a major label today. And you think about the late Charley Pride, what he went through as a Black country singer. There really were no models for you in country music, but also in Southern life, were there?

A: No. I remember Truman Capote; he went on Johnny Carson and I was just ... I mean, he came out with ... grown men didn't act like that with that scarf. And the little — kind of what gnarliest people say — he had a lisp. It was a very strange little speech impediment that he had. But anyway, he would come out on Johnny Carson and I went to the bathroom and threw up. The very next day I went to the Chattanooga Public Library and I checked out every book that Truman Capote had written. And I began to read them. And he was very good at veiled inferences, you know. And at 14, that kind of saved me. It really did. And then I got a chance to play him. It was Broadway bound.

Q: What makes the great Leslie Jordan, in the middle of a pandemic, decide to make a country album?

A: Well, I felt that people needed a little comfort. And see, most of these songs were all hymns. And just like Elvis and Loretta, we came up in the church, all of us did. And on Sunday morning we sang these hymns. My journey in and out of the church was that I felt early on that I couldn't embrace something that didn't really embrace me, and I sort of walked away. But then you realize when you get older, I have no ax to grind, especially with these songs.

Q: I never met Tanya Tucker, but I would like to rent a van and just drive down the West Coast with her. Tell me about her. What should I know?

A: Here's what you should know. She is without a doubt the most fun person that I think I've ever met. She's just a handful.

Q: When you say a handful, what exactly do you mean?

Q: You have a book coming out and talk about your life, and you talked about this with Anderson Cooper quite a bit. You drank for a while. And something precipitated your quitting 22 years ago, right?

A: Yes. Well, it was a trip to the pokey. I was the man sitting in the slammer with Robert Downey Jr.

Q: I'm sorry, this is a serious thing. But when someone says, the pokey, and you mentioned Robert Downey Jr. — Explain please, to the public.

A: I got arrested for my third DUI in California, which takes it very seriously. You get one, you know, you can have too much wine on an empty stomach, whatever. That's a slap on the wrist. You get two and usually they take away your license and you pay $1,000. You get three and all my friends said that you're going to jail. I said, "I can't go to jail. I'm on [the television show] 'Pacific Blue.'"

Q: That is one of the top three "Family Feud" excuses given by people arrested. "Hey, I'm in a show with Mario Lopez."

A: It does not work. And so I was sitting in the slammer. And 12 days into this unfortunate incarceration, I went to the guy that lets everybody in and out with the turnkey, and I said, "I'm having sort of a panic attack and if you could let me out, I will walk around the block and I'll come back." He said, "You're not going nowhere." Then he came over later and said, "Listen, we've taken pity on you and you've done 12 days of your 120-day sentence. We have Robert Downey Jr. downstairs and we don't have anywhere to put him. So he's going to take your place, but you have to share a holding time."

Q: Did you end up talking about it later with Downey?

A: There was a boy on our cellblock who was HIV positive and he was treated unmercifully. "Don't eat with him, he's got AIDS." And so I sat down with him, and the kid, he got kind of teary-eyed and said, "You don't have to do this." And I said, "Oh, yes, I do." And so when I got out, I thought, "Who's gonna watch after him? Who's gonna make sure they don't bully him?" So I wrote this impassioned plea, "Robert, you don't know me, but please look after this guy." And I was the only one in the country privy to Robert Downey Jr.'s current address. You can get anybody's booking number. So anyway, I wrote him the letter and he said to me, "I carried that letter my entire incarceration."