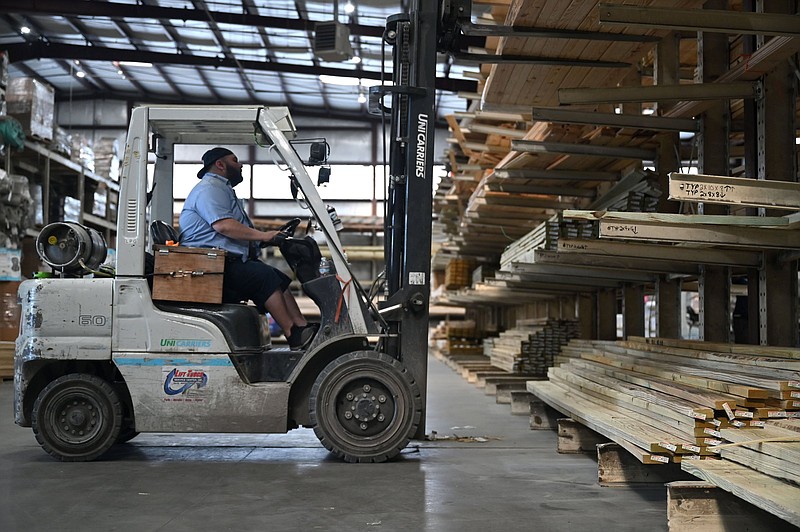 Mitchell Farmer uses a front loader to organize lumber in the warehouse at Lumber One in Mayfl ower on Tuesday. See more photos at arkansasonline.com/411lumber/. (Arkansas Democrat-Gazette/Stephen Swofford)

Lumber prices across the nation are at record highs and that means headaches and higher prices for the Arkansas' home builders and lumber suppliers.

The covid-19 pandemic pummeled the lumber industry, first shutting down production and then, as record low mortgage rates made new homes attractive, ratcheting up demand. Meanwhile people stuck at home for months went in search of material for home improvement projects, while other's opted for home expansion, driving lumber demand, and prices even higher.

Adam Wells, president of Lumber One Home Center, which has stores in Mayflower and Stuttgart, said the cycle of supply disruptions over the past year because of the pandemic, mixed with surges in demand for lumber and other building materials, created market conditions he's never seen before.

"It's staggering, but demand doesn't seem to be slowing down at all," he said.

Daniel Menden, a owner of Menco Construction in Sherwood and chairman of the Greater Little Rock Home Builder's Association, said that means the cost of simply framing a house has jumped dramatically and with the combination of lumber costs tacked on to rising costs for other construction materials, from shingles to windows, he's seeing his building costs increase at least 20%.

In February, the seasonally adjusted annual rate for all new home sales stood at 775,000 across the nation, according to the U.S. Census Bureau and the Department of Housing and Urban Development, up 8.2% from the previous year. According to preliminary data from the Census Bureau, there were 8,533 building permits issued for single-family homes in Arkansas in 2020, that's up 8.4% from 7,869 for the previous year.

The median sale price of houses sold in the U.S in February stood at $349,400, up from $345,900 from the same period year ago. The seasonally-adjusted number of new houses available for sale is 312,000, or about 4.8 months of inventory at current sale rates.

Wirth said the rising cost of lumber along with other construction supplies has made it difficult for him to be able to accurately estimate his own costs.

"As a builder, it's really difficult," Wirth said of the current market conditions. "It's like buying lobster -- it's market price."

According to the most recent Arvest Bank Skyline Report, residential inventory in Benton and Washington counties remains tight, with the number of homes for sale during the second half of 2021 down 61% to 707 and the number of completed but unoccupied homes down just shy of 21% at 245. New construction appears to be picking up to fill the gap with new residential building permits standing at 2,030 for the last six months of 2021, the most since 2006.

Both Wells and Menden said the rising cost of homes doesn't seem be be deterring builders or buyers. They cited pent up demand brought on by the pandemic and record low mortgage rates that make home buying attractive even with the increasing cost of homes.

"After moving up for seven consecutive weeks, mortgage rates have dropped due to the recent, modest decline of U.S. Treasury yields," Sam Khater, Freddie Mac's chief Economist said in a statement. "As the economy recovers, it should experience a strong rebound in the labor market. Combined, these positive signals will continue to bolster purchase demand. The drop in rates creates yet another opportunity for those who have not refinanced to take a look at the possibility."

Wells, the owner of Lumber One, stressed lumber is a commodity and while that equates to changes in its value both expected and unexpected, the market over the past year has been filled with unprecedented twists and turns. He said looking to the future, in the short term, on the supply side, there should be some improvement, due to the covid-19 vaccines helping to keep lumber mills open and productive, but demand for lumber still seems unusually hot.

"I don't think demand side of this is going to go down while interest rates are relatively and historically low, and I don't see that changing until there's some sort of monetary policy posed by the feds down the road to combat other forces," Wells said. 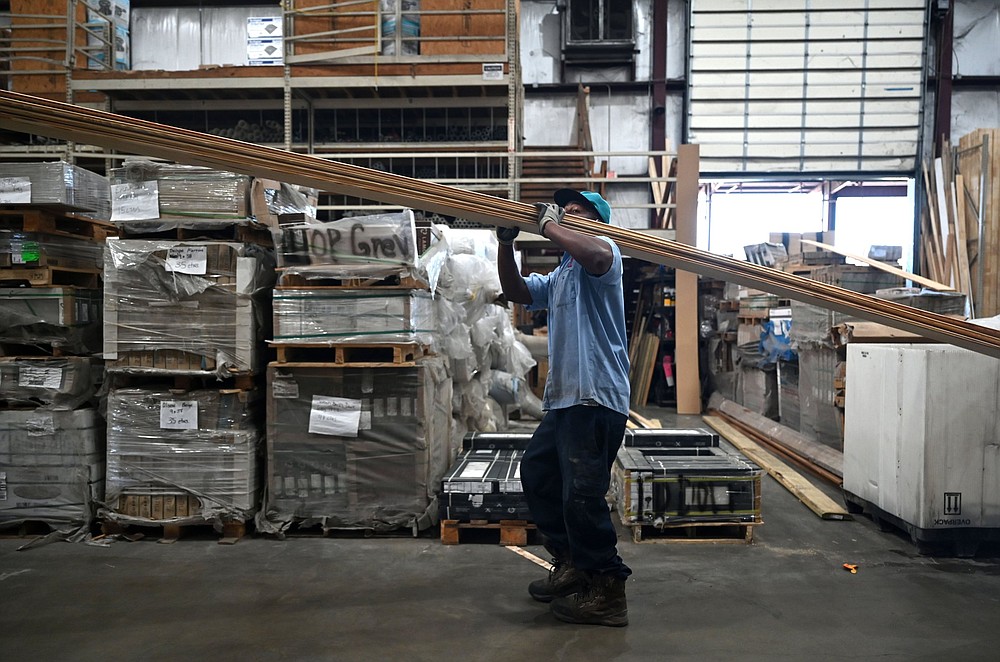 Khiry Smith carries a load of lumber through the warehouse during his shift at Lumber One in Mayfl ower on Tuesday. See more photos at arkansasonline.com/411lumber/. (Arkansas Democrat-Gazette/Stephen Swofford)
ADVERTISEMENT