Man asks for her hand -- third time's the charm 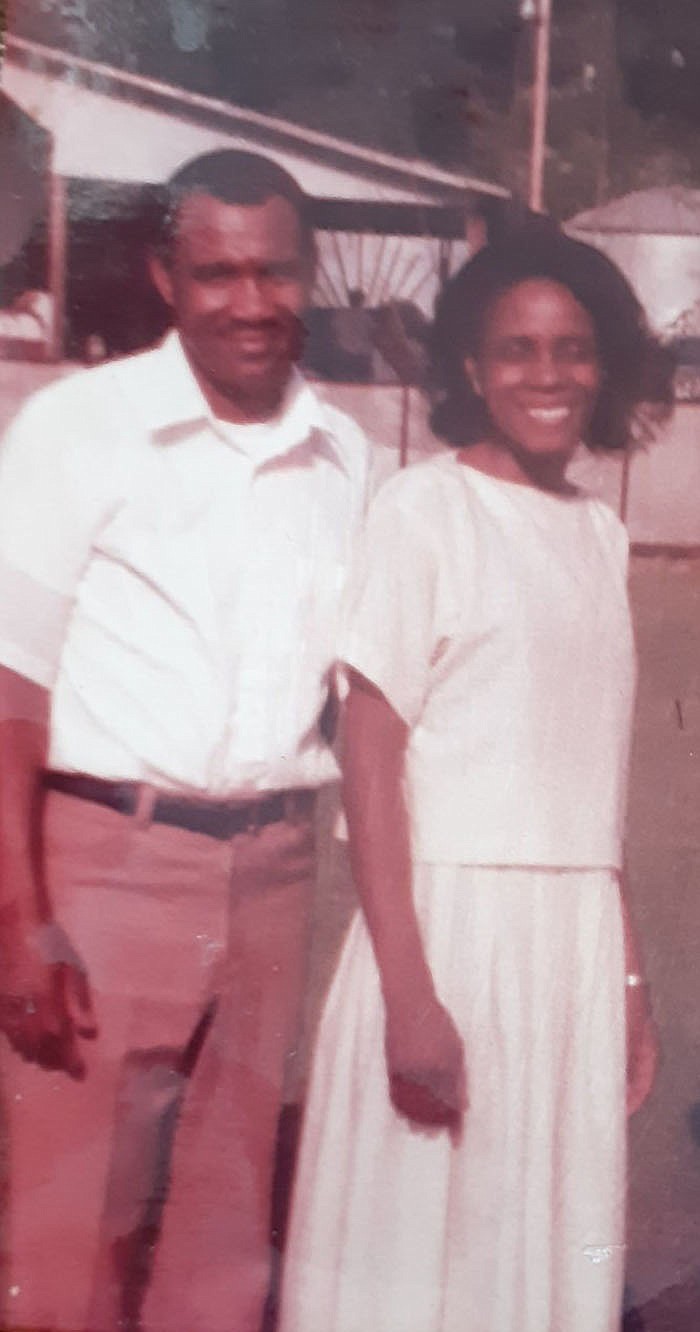 George and Ruby Cunningham were married on Nov. 7, 1970. They were high school sweethearts. George told Ruby he would start going to church so she would continue seeing him, but he didn’t actually get saved until they had been married for a few years. (Special to the Democrat-Gazette)

George Cunningham watched as his friend talked with Ruby Foster, and he realized instantly that he just had to talk with her himself.

"My friend was showing me around," says George, who was new to the area in 1968 and was strolling around downtown Holly Grove with some other young people that day. "They were all out walking and doing, the girls together and the boys together."

His friend stopped to chat with two girls -- Ruby and her friend. George's attention was instantly drawn by Ruby. Fortunately, his friend's focus was on Ruby's friend.

"So that's just the way it went," George says.

A week or so later, George showed up unannounced at Ruby's house, and she made a production of asking her mother if it was OK that he was there.

"He didn't ask if he could come see me or anything, he just came to my house on the fly," Ruby says. "So this is what I did to him when he came to my house: I said, 'Mom, I think he wants to ask you something. I think he wants to ask you if he can come see me.' He was so embarrassed because I asked her that right in front of him. She knew that I was just kind of teasing, because we were at the age where we were kind of receiving company."

He visited her several more times -- as often as he could -- before the end of their 11th grade year. The girls and boys were separated for part of each school day because the girls had home economics classes and the boys had courses in agriculture, but George and Ruby found plenty of opportunities to talk while they were there.

"Once you call yourself dating a young girl, you see that girl, especially at noon break and other little breaks like that," George explains.

Ruby was to visit relatives in Chicago that summer, and George wanted to make sure she didn't forget him while she was gone, so he organized a festive party in her honor as a sendoff.

"I think that was the probably the first time I actually went out with him," Ruby says.

The party was at George's house, and he provided the music and snacks and invited their friends for dancing and fun.

"I was really impressed," Ruby says. "I guessed he really liked me, to give me a party."

He wrote to her once over the summer -- she still has that letter -- and they talked on the phone when they got the chance.

She wasn't quite smitten with him yet, but she was still happy to see him when she got back home. They dated throughout their senior year.

After high school graduation in 1969, Ruby started classes at the Arkansas Agricultural, Mechanical and Normal College, now the University of Arkansas at Pine Bluff. George quit his job in Holly Grove and moved to Pine Bluff to be close to her. They had an on-again, off-again relationship during that period, according to Ruby. She knew he loved her -- but she also knew he liked to flirt with other girls.

George had to do some convincing to get Ruby to marry him. Three times they had blood tests done in preparation for exchanging their vows, and twice she refused to go through with the marriage.

Ruby was back home in Holly Grove when he asked her the third time and she said yes.

"Our third blood test was about to expire that day," George says. "When she said yes, her mother was at work, and we went on to the courthouse and got married right then."

George and Ruby were married on Nov. 7, 1970, by a justice of the peace, and Ruby moved in with George's family in Holly Grove.

Their early years of marriage were rocky, they concede.

Ruby had told George when they were first dating that she couldn't see him anymore because he wasn't saved.

"I told her that wasn't any problem, that I could easily be saved," George says. "I played at going to church and saying I was saved, just so I could talk to her."

"After that it was beautiful," says George, who now pastors the Prayer House of Faith Church in Holly Grove. "God delivered us. We got our heads on straight and everything was beautiful. After we got married it still wasn't good. Our life was not right, but she got reclaimed first and then God saved me and everything changed."

In celebration of their 50th anniversary, the Cunninghams' children planned a formal wedding for them. They renewed their vows April 3 and then left for the honeymoon they missed 50 years ago.

"We love to fish so they gave us a week at Lake Chicot," Ruby says.

George is happy with the show of their renewed dedication to one another.

She says: “I just kept thinking, ‘Wow, I’m married.’ I had packed up my things and moved to his house, but I had to get that in my mind, that I was married.”

She says: “You’ve got to have Christ in the center of your life and you’ve got to love each other.” 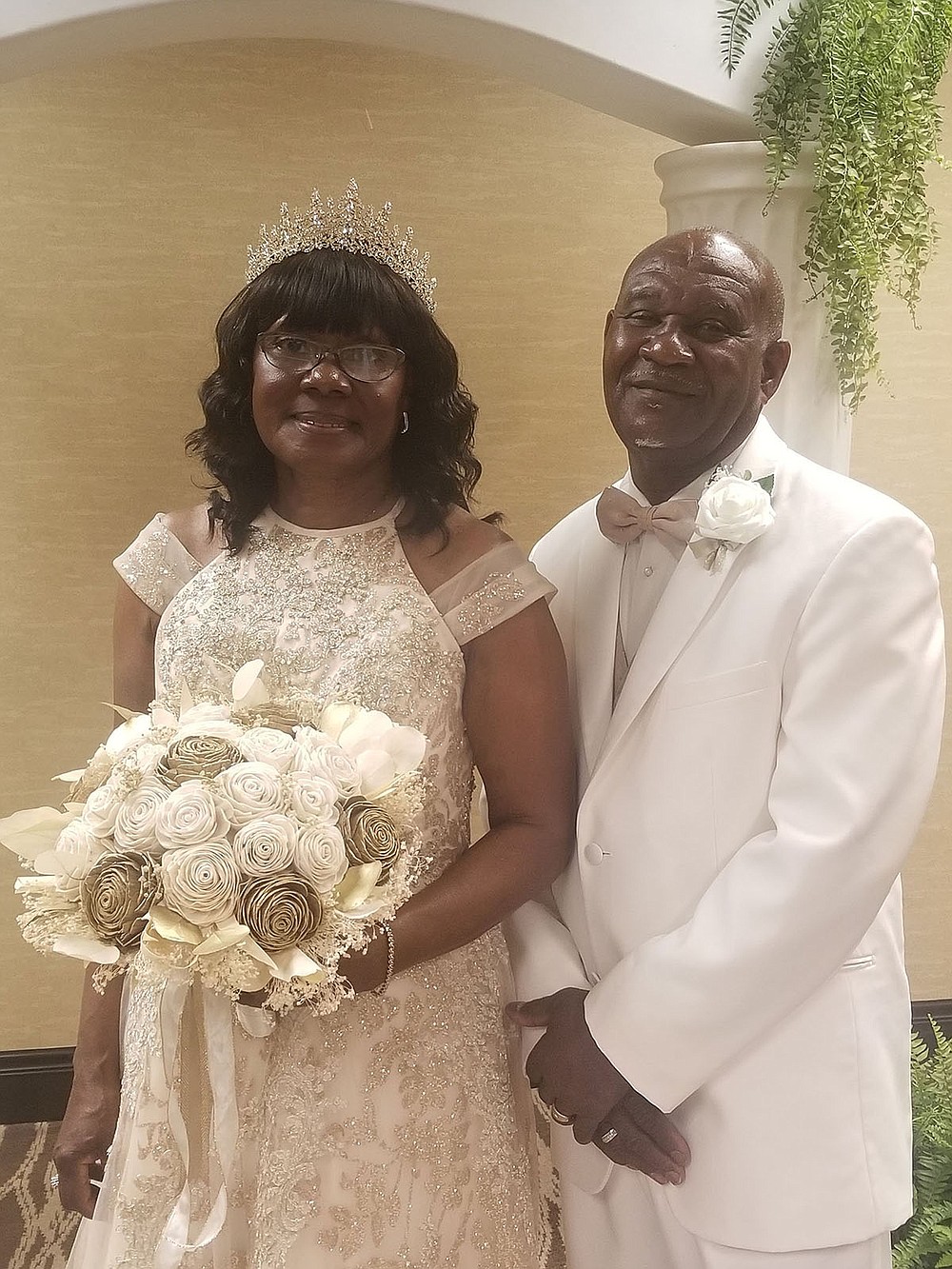 George and Ruby Cunningham didn’t dress up for their wedding officiated by a justice of the peace on Nov. 7, 1970. However, they wore formal clothes for their vow renewal April 3. Their children did all the planning. “They did the invitations and everything. They told us to just come,” Ruby says. (Special to the Democrat-Gazette)
ADVERTISEMENT