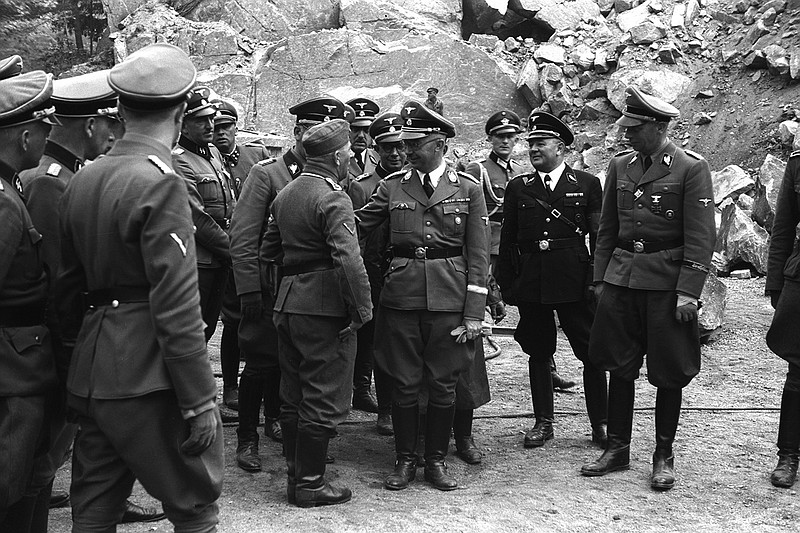 Franz Josef Huber (sixth from right at center rear) accompanies SS leader Heinrich Himmler (fourth from right) during a visit to the Mauthausen concentration camp in Austria where at least 90,000 internees were murdered. (The New York Times/Amical de Mauthausen)

By the war's end the official, Franz Josef Huber -- who also held a general-level rank in the SS, the Nazi paramilitary organization -- led one of the Gestapo's largest sections, stretching across Austria and with roles out to the east. In Vienna after the Nazi takeover, his forces worked closely with Adolf Eichmann on deportations to concentration and extermination camps.

Eichmann would eventually be executed for his role in coordinating the murder of millions of Jews. Today is the 60th anniversary of the opening of his trial in Jerusalem. But Huber never had to hide or to escape abroad, as many other top Third Reich commanders did.

He spent the final decades of his life based in his hometown, Munich, with his family, under his own name. And the explanation for this strange immunity appears to lie in his usefulness in the spying conflicts of the Cold War.

U.S. intelligence documents show that there was strong interest in drawing on Huber's wartime network to recruit agents in the Soviet bloc, even as Austria was seeking to have him tried for war crimes.

"Although we are by no means unmindful of the dangers involved in playing around with a Gestapo general," a CIA memo from 1953 stated, "we also believe, on the basis of the information now in our possession, that Huber might be profitably used by this organization."

Newly disclosed U.S. and German intelligence records reveal that both countries made efforts to conceal Huber's role in the crimes of the Third Reich and to prevent him from facing trial. German public broadcaster ARD obtained the records and shared them with The New York Times. They will be presented in a "Munich Report" investigative documentary scheduled to be broadcast in Germany on Tuesday.

The German intelligence service, known by the initials BND, employed Huber full time for nearly a decade, giving him a cover story that made him appear to work for a private business. It was nearly 20 years after the war before agency bosses decided they could no longer tolerate the connection. A December 1964 memo warned that disclosure of the secret would "frustrate the efforts of the service's leadership to build confidence with the federal government and the public."

This was not the first time Huber had adapted himself to new masters.

In the 1920s and early 1930s, as a talented young police officer in Munich, he took part in the surveillance of political parties, including the Nazis. After Hitler took power in 1933, he became a zealous Nazi and, soon after, a senior figure in the Gestapo, Nazi Germany's feared secret police force.

The Nazi leaders building that force needed experienced police officers, said Michael Holzmann, the son of an Austrian Nazi who has for many years been researching the activities of the Gestapo in that country. "Huber seized this opportunity and turned from a little investigator into a most successful leader of the Gestapo terror regime in former Austria," he said.

In March 1938, after Germany annexed Austria, Huber was made the Gestapo chief of the most important part of the country, including Vienna, the capital. Shortly after, the Gestapo began an extensive hunt for dissidents in Austria, and Huber gave orders "to arrest immediately undesirable, particularly criminally motivated Jews and transfer them to the concentration camp Dachau." A few days later, the first two transports of Jews left Vienna for the camp, with many more to follow.

Huber remained in his post until the end of the war, being given more and more personnel and authority. During that time, 70,000 Austrian Jews who were not able to leave the country were murdered, close to 40% of the original community, while their property was looted by the Nazis.

Eichmann confirmed at his trial that he was involved in the deportation of Jews but refused to plead guilty to genocide, saying, "I did not have any other option than to follow the orders I got."

Huber took a different approach. Speaking to an official of the Nuremberg war crimes tribunal in 1948 -- who interviewed him as a witness, not a suspect -- he said he had known nothing about the extermination until the end of 1944, when his deputy told him something vague.

"But the historical evidence paints a completely different picture," says professor Moshe Zimmerman, a historian and Holocaust scholar at the Hebrew University of Jerusalem. "Eichmann may have been a face more familiar to the Jewish community, but the one who shared responsibility for carrying out the terror against the Jews, their collection, their forced boarding on the trains and their deportation to the camps, was the police and the Gestapo under Huber."

Huber was also photographed accompanying the head of the SS and the Gestapo, Heinrich Himmler, on a visit to the Mauthausen concentration camp in upper Austria, where at least 90,000 internees were murdered.

Toward the end of the war Huber was marked as a senior wanted war criminal by U.S. intelligence, and he appears to have anticipated what might come. He devoted much of his time to dealing with agents from the East, a commodity that would soon be even more valuable.

There are no available records about his interactions with U.S. military intelligence over the two years he was in custody, but in May 1947, despite plentiful contradictory evidence, a U.S. investigator wrote that Huber was "a fair, factual impartial police officer who carried out the police functions without party bias or racial and political prejudice." The document goes on to state that the SS general "was not an adherent of Nazi party ideologies" and calls him "completely trustworthy and reliable."

A month later, the commander of the U.S. detention camp stated that Huber's "diligence and cooperation were highly appreciated." He was released in March 1948.

"Austria was, at the time, a major front line of the Cold War" said professor Shlomo Shpiro of Bar-Ilan University in Israel, who has researched the interaction between former Nazis and Western intelligence services. "Western intelligence services struggled to recruit reliable anti-communist contacts and did not inquire too closely at the past of people they thought would serve them well."

"Many former senior Nazis took advantage of the new communist threat to secure for themselves both immunity from war crimes prosecution and hefty salaries from U.S. and West German intelligence agencies," Shpiro said.

In the following years the U.S. occupation and intelligence authorities made extensive and successful efforts to thwart, on various bureaucratic grounds, an extradition request from Austria and any attempt on the part of a number of survivors organizations and lawyers to prosecute Huber.

The United States also pressed the German authorities to handle Huber through a rapid denazification process, which ended with a short probationary sentence and a fine.

In December 1955, Huber enlisted in the Gehlen Organization, from which the BND was born shortly afterward.

"The BND recruited many Nazis, but hardly anyone had such an outstanding position," said Stefan Meining, a historian and an editor with German public television who created the documentary about Huber. "They knew exactly that Huber was not some petty Gestapo murderer but an SS general who moved within the innermost circles of the Nazi terror apparatus and was responsible for the deaths of tens of thousands of Jews and opponents of the regime."

Bodo Hechelhammer, the BND's chief historian, interviewed in the documentary, confirmed that Huber was an employee of the agency and explained that the search for skilled intelligence personnel with a clear anti-communist leaning led to recruitment "far too often among the former Nazis." The agency did not respond to a request for further comment. The CIA also declined to comment.

In early 1964, fearing disclosure, the BND concluded that it was "no longer conceivable" to keep Huber, lest his role "endanger the service," and decided to fire him.

But because Huber had not lied to his bosses about his past, "no fault could be proved" to justify firing him, so he was sent on paid leave instead.

He retired three years later, at age 65, and drew a German civil service pension until his death at age 73. 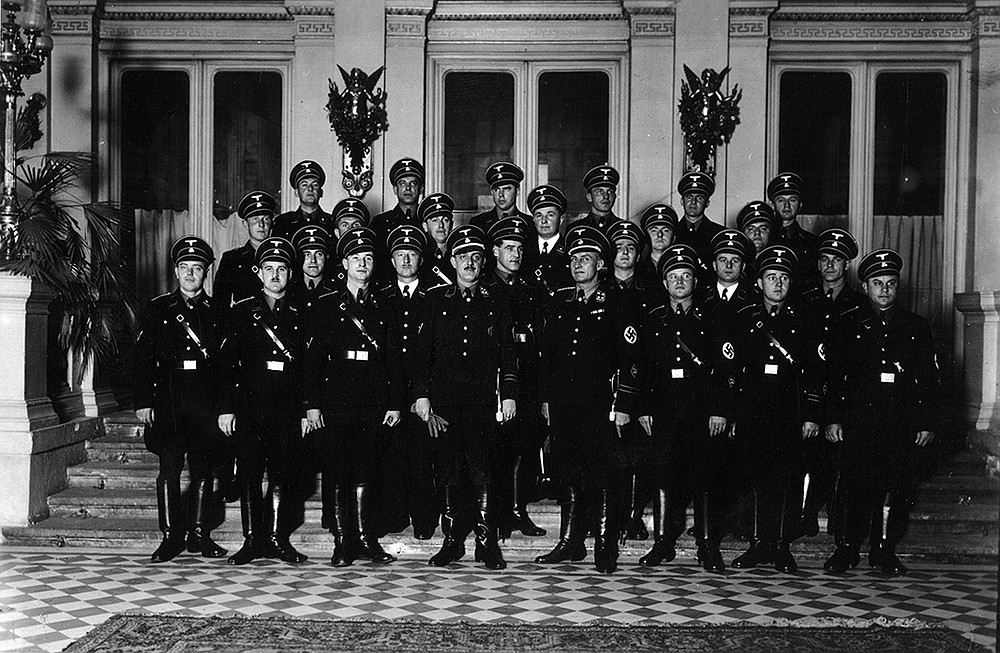