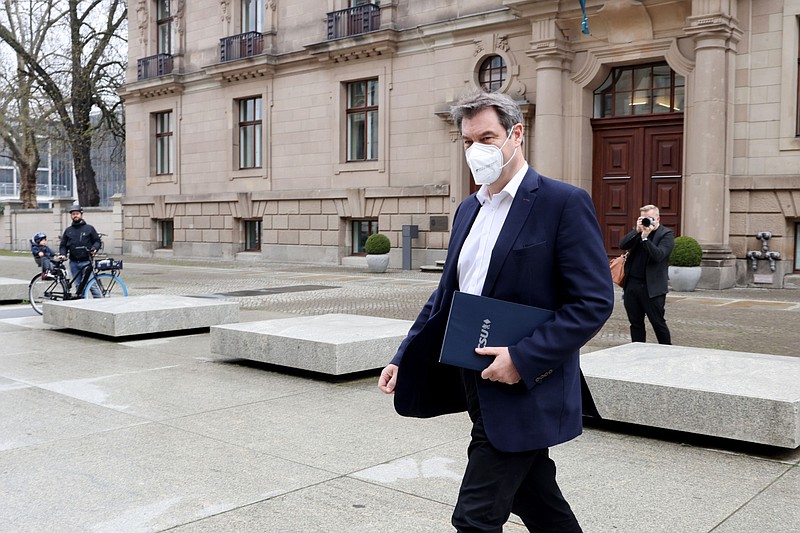 Markus Soeder arrives at the Reichstag building ahead of a news conference following a caucus meeting of Germany's ruling coalition in Berlin on April 11. MUST CREDIT: Bloomberg photo by Liesa Johannssen-Koppitz

Bavarian leader Markus Soeder joined the race to succeed Chancellor Angela Merkel after Germany's election in September, setting up a fight with the head of her Christian Democratic Union for the nomination in her governing conservative bloc.

Merkel, 66, won't run for another term, and her departure after 16 years in office has opened the field for who will lead Europe's biggest economy. She hasn't taken sides in the race.

[Video not showing up above? Click here to watch » https://www.youtube.com/watch?v=kMz3QLuQ_sY]

The Bavarian premier played up surveys suggesting he's more popular than his rival, saying it's important that the conservative candidate have broad backing among party members and the general public.

Soeder's chances could hinge on whether the two parties agree to have their leadership members hash out the candidacy or decide to open it up to their joint parliamentary caucus in Berlin, where many lawmakers support Soeder. Laschet signaled on ARD he'll be asking the Christian Democratic Union's national leadership to back his candidacy today.

"Our goal at this time, with a chancellor who is leaving office, is to foster as much unity between the CDU and CSU as possible," Laschet told reporters. "There's a lot at stake. Europe is watching how Germany develops."

While Merkel and Soeder clashed during Germany's 2015 refugee crisis, the leader of Bavaria's regional Christian Social Union party has backed her push for restrictions during the covid-19 pandemic. Laschet, meanwhile, was criticized by Merkel for a lax response in his home state of North Rhine-Westphalia.

On Sunday, both candidates signaled support for quick approval of Merkel's planned changes of Germany's infectious-diseases law, which would shift some powers to the federal government from the states. Other state leaders have demanded changes to the draft law circulated on Saturday.

National polls put support for the two parties at between 26% and 28%, compared with almost 33% of the vote in the last election in 2017. The Social Democrats, Merkel's coalition partner at the national level, have also declined. The Green party, which took 8.9% last time, is polling as high as 23%, increasing chances that it'll be part of the next government.

While approval polls favor Soeder over Laschet, only two candidates from socially conservative Bavaria have run for chancellor since 1980, and both lost.

Soeder said he's ready to run if the Christian Democratic Union, the bigger of the two parties, backs him, but that he would hold no grudges if they decided otherwise.

Laschet, the state premier of North Rhine-Westphalia, described Soeder as a potential candidate and said the matter would be solved with mutual respect. 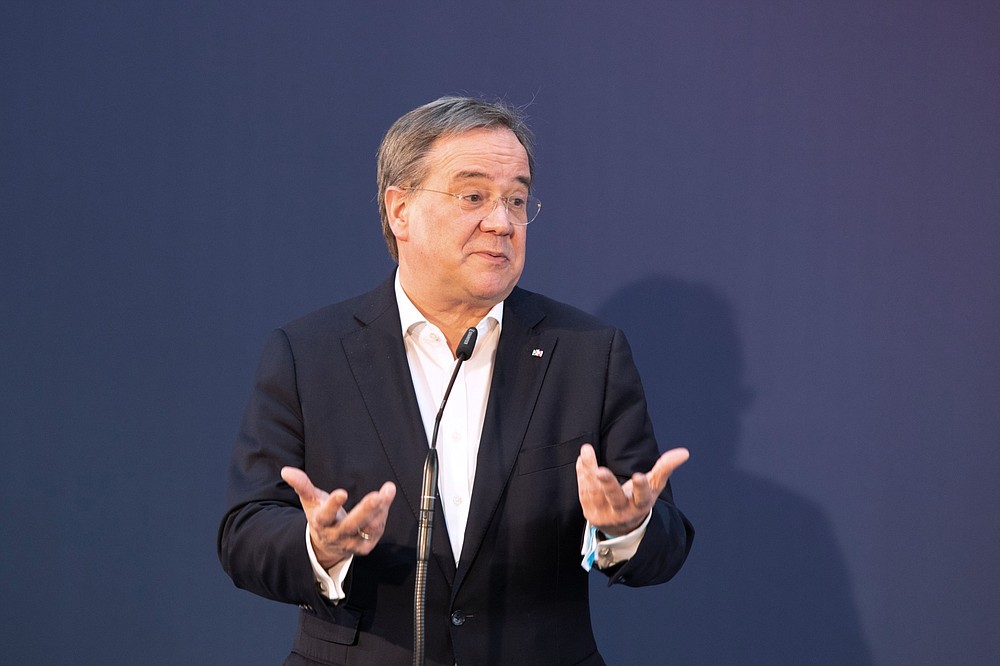 Armin Laschet, Christian Democratic Union leader, during a news conference following a caucus meeting of Germany's ruling coalition in Berlin on April 11. Bavarian leader Markus Soeder, whose party is part of Angela Merkel's governing coalition, said he's ready to enter the race to succeed her after federal elections in September, a person familiar with the discussions said, setting up a potential fight for the nomination. MUST CREDIT: Bloomberg photo by Liesa Johannssen-Koppitz
ADVERTISEMENT