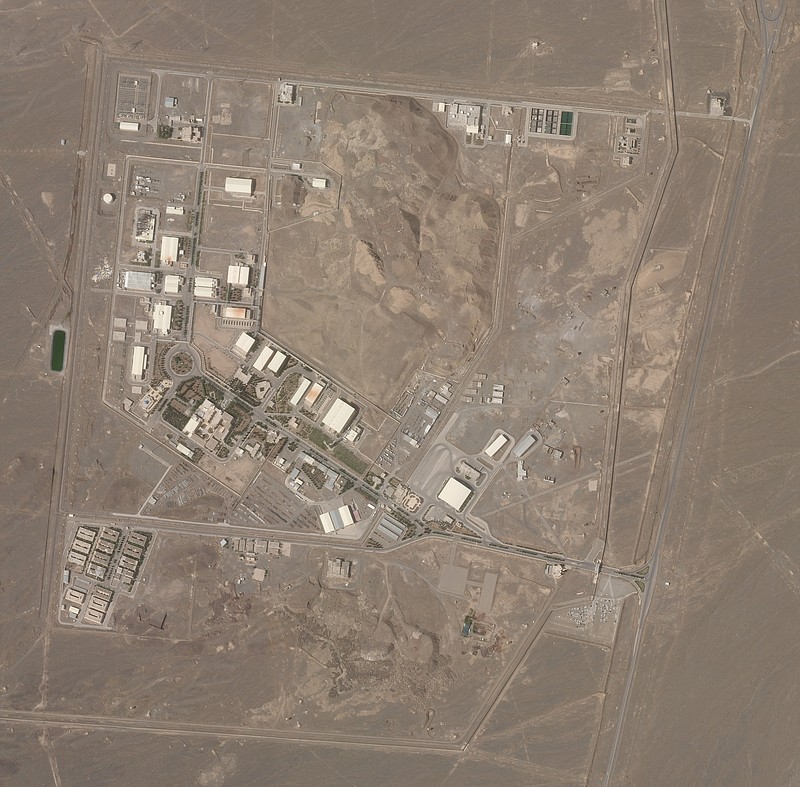 While there was no immediate claim of responsibility, suspicion immediately fell on Israel, whose media nearly uniformly reported a devastating cyberattack orchestrated by the country caused the blackout. Iran did not immediately blame anyone directly. Neither the Israeli military nor the Defense Ministry would comment on the matter Sunday.

If Israel is responsible, it further heightens tensions between the two nations already engaged in a shadow conflict across the wider Middle East. Israeli Prime Minister Benjamin Netanyahu, who met Sunday with U.S. Defense Secretary Lloyd Austin, has vowed to do everything in his power to stop the nuclear deal.

[Video not showing up above? Click here to watch » https://www.youtube.com/watch?v=uiL5h6GY32A]

There were few details about what happened early Sunday morning. Power was cut across the facility, Behrouz Kamalvandi, a civilian nuclear program spokesperson, told Iranian state television. He said there had been no casualties or damage. The event has been described as a blackout caused by the electrical grid feeding its above-ground workshops and underground enrichment halls.

Comments to state TV from Ali Akbar Salehi, the American-educated head of the Atomic Energy Organization of Iran, did not explain what happened at the facility, but his words suggested a serious disruption.

"While condemning this desperate move, the Islamic Republic of Iran emphasizes the need for a confrontation by the international bodies and the [International Atomic Energy Agency] against this nuclear terrorism," Salehi said.

The agency, the United Nations body that monitors Tehran's atomic program, earlier said it was aware of media reports about the incident at Natanz and had spoken with Iranian officials about it. The agency did not elaborate.

The blackout came a day after Iranian officials lauded the inauguration of new centrifuges housed at a site constructed following a fire at Natanz in July. It was not clear from the announcements Sunday whether those new centrifuges were harmed by the power failure.

Natanz has been targeted by sabotage in the past. The Stuxnet computer virus, discovered in 2010 and widely believed to be a joint U.S.-Israeli creation, once disrupted and destroyed Iranian centrifuges at Natanz amid an earlier period of Western fears about Tehran's program.

Natanz suffered a mysterious explosion at its advanced centrifuge assembly plant in July that authorities later described as sabotage. Iran now is rebuilding that facility deep inside a nearby mountain. Iran also blamed Israel for the November killing of a scientist who began the country's military nuclear program decades ago.

Multiple Israeli media outlets reported Sunday that an Israeli cyberattack caused the blackout in Natanz. Public broadcaster Kan said the Mossad, the national intelligence agency of Israel, was behind the attack. Channel 12 TV cited "experts" as estimating the attack shut down entire sections of the facility.

While the reports offered no sourcing for their information, Israeli media maintain a close relationship with the country's military and intelligence agencies.

Netanyahu on Sunday night toasted his security chiefs, with the head of the Mossad, Yossi Cohen, at his side on the eve of his country's Independence Day.

"It is very difficult to explain what we have accomplished," Netanyahu said of Israel's history, saying the country had been transformed from a position of weakness into a "world power."

Netanyahu urged his security chiefs to "continue in this direction, and to continue to keep the sword of David in your hands," using an expression referring to Jewish strength.

Israel typically doesn't discuss operations carried out by its intelligence agency or specialized military units. In recent weeks, Netanyahu repeatedly has described Iran as the major threat to his country, as he struggles to hold onto power after multiple elections and while facing corruption charges.

By coincidence or not, the U.S. defense secretary arrived in Israel as Iran reported the power loss at Natanz.

Austin's first talks in Israel since he became Pentagon chief in January come as the United States seeks to leverage Middle East diplomatic progress made by the Trump administration, which brokered a deal normalizing relations between Israel and several Arab states.

After meeting with Defense Minister Benny Gantz in Tel Aviv, Austin said he had reaffirmed that "our commitment to Israel is enduring and ironclad." He made no mention of Iran.

Gantz, in his own remarks while standing beside Austin, said his country views the United States as a "full partner" against threats, "not the least, Iran." Neither official took questions from reporters.

Yoel Guzansky, a senior fellow at the Institute for National Security Studies, a Tel Aviv think tank, said Austin's visit is important in part because it is the first by a member of President Joe Biden's Cabinet.

The key backdrop to Austin's visit is the Israeli government's concern about the Biden administration's attempt to work out an arrangement to reenter the Iran nuclear deal, which in Israel's view is fatally flawed. Netanyahu has for years described Iran as an existential threat to his nation.

Since then-President Donald Trump's withdrawal from the Iran nuclear deal in 2018, Tehran has abandoned all the limits of its uranium stockpile. It now enriches up to 20% purity, a technical step away from weapons-grade levels of 90%. The nuclear deal had granted Tehran sanctions relief in exchange for ensuring its stockpile never swelled to the point of allowing it to obtain an atomic bomb if it chose. Iran maintains its atomic program is for peaceful purposes.

Washington for years has invested heavily in helping Israel develop missile defense technologies, and both Republican and Democratic administrations have issued repeated assurances that the United States will endeavor to preserve Israel's qualitative military edge over its regional adversaries.

But there are questions in Israel about U.S. intentions in shifting military priorities away from the Middle East in order to focus more intensively on China and Russia as more significant threats to U.S. security.

Iran is the central source of concern to Israel and its support groups in the United States. The Jewish Institute for National Security of America argued in a report last week that such a shift in U.S. priorities would "send the wrong" signal as the Biden administration begins indirect talks with Iran on reviving the 2015 nuclear deal.

Michael Makovsky, president of the Jewish Institute for National Security of America and a former Pentagon official, said Austin's visit is especially timely, given the Biden administration's moves toward engaging Iran on its nuclear program.

"Embracing and strengthening Israel sends a pointed signal to Iran, which will only enhance a credible military option against Iran and U.S. leverage in the talks," Makovsky said in a statement.

Information for this article was contributed by Jon Gambrell, Nasser Karimi, Josef Federman, Ilan Ben Zion and Robert Burns of The Associated Press; and by Farnaz Fassihi, Rick Gladstone and Gerry Mullany of The New York Times. 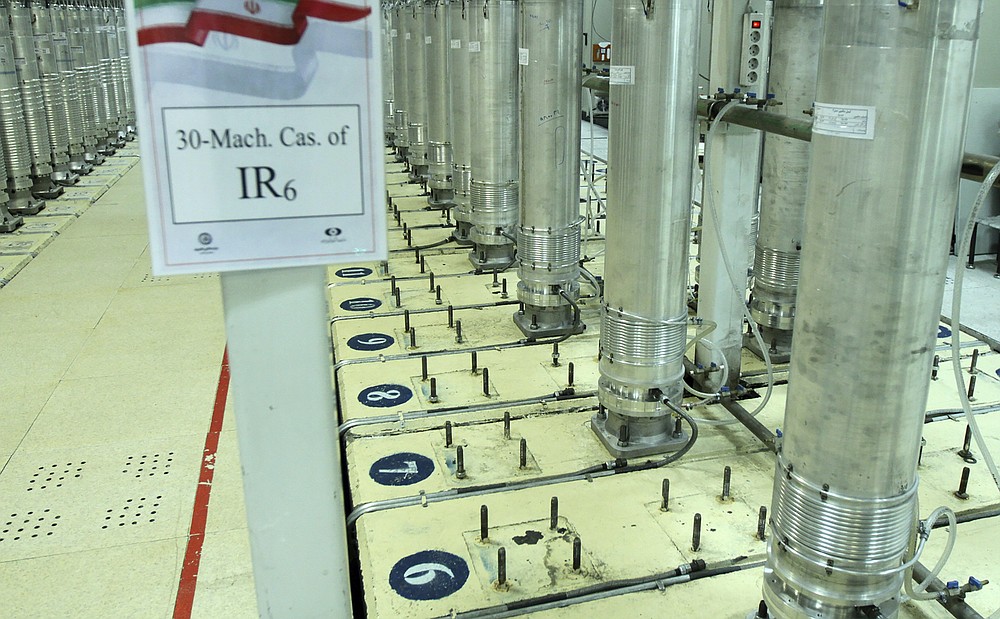 FILE - This file photo released Nov. 5, 2019, by the Atomic Energy Organization of Iran, shows centrifuge machines in the Natanz uranium enrichment facility in central Iran. The facility lost power Sunday, April 11, 2021, just hours after starting up new advanced centrifuges capable of enriching uranium faster, the latest incident to strike the site amid negotiations over the tattered atomic accord with world powers. Iran on Sunday described the blackout an act of “nuclear terrorism,” raising regional tensions. (Atomic Energy Organization of Iran via AP, File) 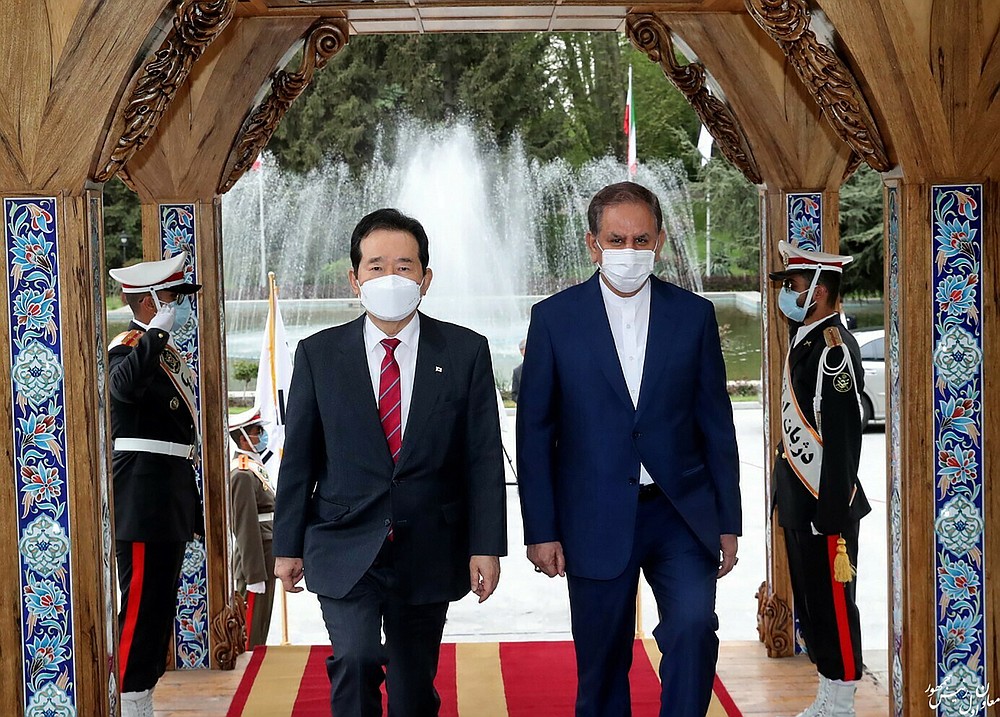