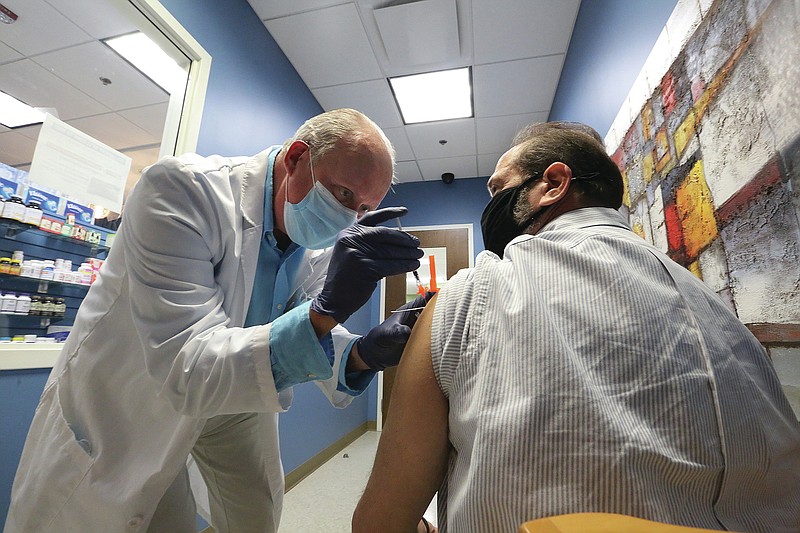 A three-day streak of no Arkansas deaths attributed to covid-19 ended Monday as the Department of Health reported four deaths, raising the toll to 5,665.

Another 69 new cases were added to the state's total Monday, while active cases dropped by 93 to 1,640 and hospitalizations dipped by seven to 156.

"Our number of active cases and hospitalizations declined again yesterday," Gov. Asa Hutchinson said in a statement. "Our vaccine numbers are increasing, but we must do more. If you are 16 and older then you are eligible for the vaccine. It is important that our eligible high school students get a dose. Get your vaccine as soon as you can."

When asked if the lower numbers mean the virus is stabilizing in the state, Health Department spokeswoman Danyelle McNeill said the department is analyzing the available data and is "not able to answer these questions at this time."

The reduction in case numbers, however, comes at a time when variants of the virus are taking hold.

"We are seeing an increasing number of cases due to variants in Arkansas," said McNeill. "We have seen the U.K. variant, the two California variants and the variant from Brazil."

A variant of the virus is suspected, McNeill said, when someone who is fully vaccinated tests positive. "Especially when it is associated with a cluster of cases," she said.

Once a specimen for a suspected covid-19 variant is collected, it takes about two weeks to get an answer from the U.S. Centers for Disease Control and Prevention, McNeill said.

The variants seem to spread easier and quicker than the original virus, according to the CDC.

According to Health Department data, the number of Arkansans who were fully vaccinated rose by 3,564, to 547,037, or about 23% of the population.

About 15% of the population -- or 357,528 people -- 16 and up have received one shot. The Pfizer-BioNTech and Moderna vaccines require two shots, while the Johnson & Johnson vaccine requires just one.

Arkansas Pharmacists Association CEO John Vinson on Monday reiterated what he has said for weeks, that while pharmacists are still getting appointments, the demand has slowed. Some are requesting their weekly allotments be reduced, Vinson said.

And some pharmacies are having issues with people missing appointments for their second doses.

"We are currently developing plans for how we will address the delay in second-dose vaccinations," McNeill said. "Many vaccine providers are already providing follow up telephone calls and ADH [Arkansas Department of Health] is also addressing the need for the second vaccine through media messaging."

Vinson said multiple-dose vaccines always come with the challenge of getting recipients to follow through.

"The reports that I'm getting from pharmacists is that less than 5% don't show up for the second dose if they received their first shot at their family pharmacy," Vinson said. "They have a much higher rate of completing the series. The big challenge are the larger events."

Those large clinics -- such as those held at churches or community centers -- should if possible use the one-dose Johnson & Johnson vaccine, Vinson said. But that might not be an option, he added.

Johnson & Johnson vaccine allocations are expected to plunge by 86% after quality-control issues were discovered at a plant in Baltimore run by subcontractor Emergent BioSolutions. Workers contaminated a vaccine batch and had to dispose of 13 million to 15 million doses.

The plant is now being inspected by the U.S. Food and Drug Administration.

A person is more likely to follow up with the second dose if they have an existing relationship with the vaccine provider, Vinson said.

Vinson said he's heartened by the number of teens in the state getting vaccinated since Hutchinson recently opened the eligibility to everyone 16 and older.

Hutchinson has also urged high school students to get vaccinated.

"Even those younger patients can still get the severe disease or have long-term side effects from covid-19," Vinson said. "They can also pass it on to others."

Vinson praised a De Queen vaccination event that saw more than 500 people get the Pfizer vaccine. "A large number of those were students," he said.

The only way to prevent a resurgence of the virus is to get a high percentage of the population vaccinated, Vinson said.

"Superintendents, coaches, church youth pastors need to reach out and partner with pharmacies to offer clinics to get these young adults vaccinated so they can live their lives normally," he said. "Don't wait until the fall. Don't procrastinate. Get scheduled and do it now. Put it in your rear-view mirror."

The number of people requiring ventilators remained the same at 17. Those ever on a ventilator since the pandemic began remained at 1,596.

The number of covid patients in an intensive-care unit dropped by five from Sunday to 50.

The state cases that were added Monday included 57 that were confirmed through polymerase chain reaction, or PCR, tests.

The other 12 were "probable" cases, which include those identified through less-sensitive antigen tests.

The Health Department didn't report any increase in its count of cases among prison and jail inmates.