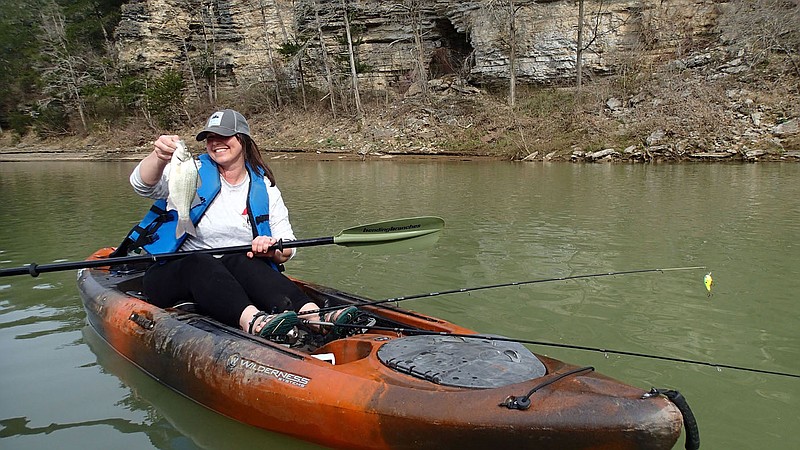 Becky Roark of Fayetteville catches a white bass in April 2020 on the War Eagle River. White bass fishing heats up in April when these fish make their spawning run up the tributaries of Beaver Lake and other big Ozark reservoirs. (NWA Democrat-Gazette/Flip Putthoff)

Fishermen know that when dogwoods bloom, white bass are on their spawning run up the tributaries of Beaver Lake and reservoirs across the Ozarks. Today we offer a basic course on catching white bass, sort of a white bass fishing 101. No need to take notes, just grab a fishing pole and go.

• What's the white bass run? White bass don't lash little running shoes to their fins. They travel, or run, in big schools up the White River and War Eagle River tributaries of Beaver Lake to spawn. A water temperature of around 50 degrees fires the starting pistol for the white bass run. Mid-April is when it really gets going. Fishing can be fast and furious into early May, though white bass don't bite all the time.

Females lay thousands of eggs on the gravel shoals of these tributaries. So plentiful are white bass that there's no daily limit or length limit at Beaver Lake or its tributaries. Anglers may keep all the white bass they care to clean.

• What's the best way to catch some? Any lure that imitates a live minnow is good to cast. Small white grubs or jigs should draw some strikes. Small spoons work well and can be cast a long way. In-line spinners such as a Rooster Tail are good to have in a tackle box.

Small minnows or small crawdads are great live bait for white bass. A key for bait or lures is to fish them close to the bottom.

A lightweight spin-cast rod and reel is ideal for white bass fishing. Most anglers use 6-pound-test monofilament line on their reels. Male white bass may weigh a pound or so, but females can grow to three pounds or larger. The state record white bass is 5 pounds, 6 ounces, caught from the Mississippi River in 2005.

White bass are a blast to catch on a fly rod. A Clouser minnow is the king of white bass fishing flies. A white woolly bugger or any white fly that sinks may work.

• Where are the best places to fish? At Beaver Lake, lots of anglers travel in boats up the White and War Eagle rivers, as far upstream as possible. They drift back downstream with the gentle current, fishing as they go.

Options for bank fishing are limited because most of the shoreline of these rivers is private land. The White River access where Arkansas 45 crosses the river near Goshen is white bass central during the spawning run. Anglers can fish from shore there.

Jon Stein, Northwest Arkansas fisheries supervisor with the Arkansas Game and Fish Commission, says white bass spawn along the riprap on the north end of Beaver Dam. It's a great place to fish and one that most anglers overlook. White bass spawn on the rocks all along the day use area at the dam. There's plenty of bank fishing access. Fishing is good enough that the locals call this area "White bass cove."

Houseman access, on the White River seven miles downstream from Beaver Dam, is a bank-fishing option. Romp Hole access, where the Kings River joins Table Rock Lake north of Berryville, is a hot bank-fishing spot during the white bass run.

• Are white bass good to eat? White bass make fine table fare. The best way to clean them is filet the fish the same as any warm water fish such as crappie or walleye. A strip of red meat will be visible on the outside of the filet. This red meat has a strong, fishy taste. It's easily removed by running a knife blade underneath the red meat. Then fry or bake the white bass filets just like any other fish.

The late and legendary fishing guide, J.D. Fletcher, would just sprinkle a little salt and pepper on a white bass filet and zap it in the microwave.

Class dismissed. Time to hit the water and catch a mess. White bass are off and running. 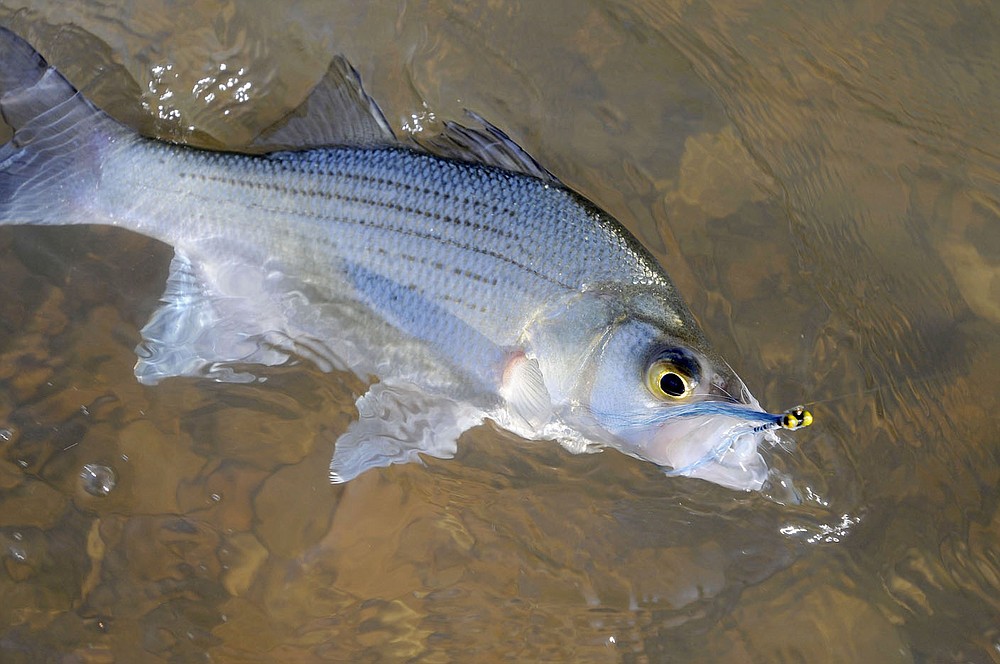 Fly fishing is an exciting way to catch hard-fighting white bass. This one bit a Clouser minnow during a fly-fishing trip on the War Eagle River. (NWA Democrat-Gazette/Flip Putthoff)
ADVERTISEMENT