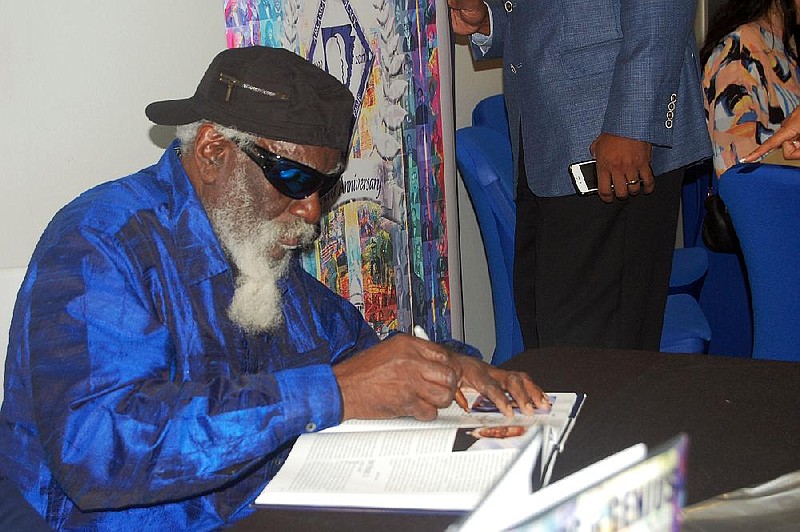 The music of an Arkansas-born jazz legend is part of a new film that explores the work of visual artist Julie Mehretu.

“Promises: Through Congress” is a film by Trevor Tweeten that combines Mehretu’s painting “Congress” and “Promises,” the new album by Little Rock native and saxophonist Pharoah Sanders, electronic composer Sam Shepherd and the London Symphony Orchestra.

The Broad in Los Angeles and the Whitney Museum of American Art in New York City will co-host the film’s virtual premiere at 2 p.m. April 24 for a special, one-time showing.

[VIDEO: See the trailer for the film here » arkansasonline.com/413pharoah/]

The album, a continuous piece across nine movements for saxophone, strings, keyboards and electronics, is the first new music from Sanders, 80, in nearly two decades.

While composing “Promises,” Shepherd, who records as Floating Points, says he would refer to and get lost in Mehretu’s 2013 abstract painting, according to a news release. The idea for the trapezium on the album’s cover is taken from a motif in the center of “Congress.”

New York-based Tweeten made the film on location at The Broad, where the painting is on view and is part of the museum’s permanent collection.

“The film functions as a single sustained gesture, a journey emerging from the intimate details and texture of the painting,” Tweeten says in press materials. “I was interested in the way the slow nearly imperceptible zoom had the potential to create a suspended state, opening up new possibilities of experiencing ‘Congress’ through time. The trajectory of the film mirrors the shape of the music, ever expanding, slowly building momentum to points of reveal and release.”

Mehretu was born in Addis Ababa, Ethiopia, in 1970 and raised in East Lansing, Mich. She is the recipient of a MacArthur Fellowship and the U.S. Department of State Medal of Arts Award and is a member of the American Academy of Arts and Letters.

A mid-career survey of her work is on view at the Whitney Museum of American Art through Aug. 8.

“It is an immense honor to be in the orbit of this brilliant, mesmerizing and transformative album composed by Sam Shepard, with one of the living legends of music, Pharoah Sanders. It feels like both a balm and a calling of this precarious, vertiginous time,” she says in a press release.

For more information on the premiere, visit the websites for The Broad and the Whitney Museum of American Art.