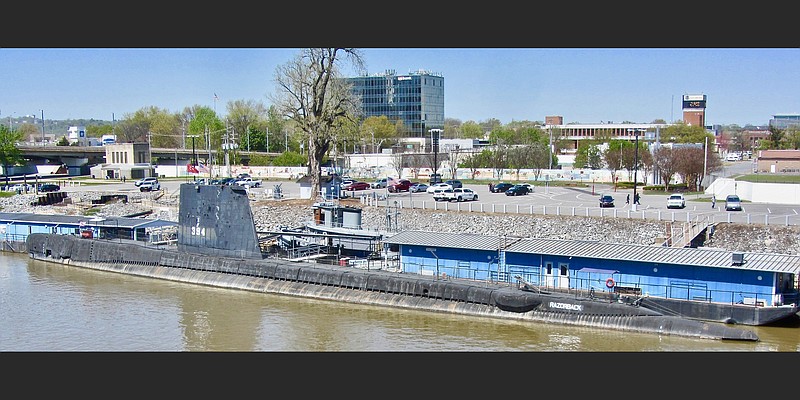 The USS Razorback, an attraction in North Little Rock, is named for a species of whale. (Special to the Democrat-Gazette/Jack Schnedler)

The USS Razorback is back in business on North Little Rock's waterfront. The World War II submarine has reopened for visitors spry enough to descend a 14-foot ladder then climb back up after ducking through the interior's half-dozen low doorways.

After a year closed due to covid-19, the 311-foot-long vessel — named for a whale species, not our state's feral hogs — resumed guided tours April 2. It operates Fridays through Sundays as a highlight of Arkansas Inland Maritime Museum.

A neighbor to the 77-year-old sub is the tugboat USS Hoga, which performed valiantly to help save sailors' lives at Pearl Harbor during and after the Japanese attack of Dec. 7, 1941. Both are docked at the floating Arkansas Inland Maritime Museum, where exhibits trace their history and other U.S. Navy lore.

On a recent tour, guide Michael provided a sprightly account of the rugged conditions aboard the Razorback during its Pacific Ocean combat duty in 1944-45 and the witnessing of Japan's unconditional surrender.

There was no air conditioning to ease temperatures that rose above 100 degrees when the Razorback stayed submerged. The water supply had to be desalinated from the ocean at the rate of 2,000 gallons a day. That made showers an infrequent pleasure.

Enlisted men in the crew of 70 to 80 slept on thin bunk mats in the forward and aft torpedo rooms. Some lay cheek-to-jowl with the 24 torpedoes loaded aboard for each mission. Sleeping was done in three eight-hour shifts, known as "hot-racking." The bunks lacked sheets and pillows, because fresh water was too precious to be used for cleaning linen.

Banners record the Razorback's successes during five combat patrols. It sank Japanese warships and cargo vessels, shot down enemy aircraft and rescued U.S. sailors and airmen from Pacific waters. It was one of 12 American submarines present in Tokyo Bay on Sept. 2, 1945, as Gen. Douglas MacArthur took the Japanese surrender aboard the battleship USS Missouri.

Following a quarter-century of U.S. Navy service, the submarine was sold to Turkey in 1970 and renamed Murat Reis. After North Little Rock took possession in March 2004, it arrived here that October and opened to the public as the Razorback again in May 2005.

U.S. submarine crews were all volunteers, as Michael pointed out. The enlisted men received $30 a month in extra pay, along with better food than on surface ships. For those perks, they faced highly hazardous duty. In the museum's parking lot, a monument notes its magnitude: Of 288 Navy subs in service, 52 were lost on patrols. Deaths totaled 3,505 — one of every seven submariners. The memorial remembers them as "on eternal patrol."

Arkansas Inland Maritime Museum visitors also can board the diminutive Hoga, which arrived in North Little Rock in November 2015. One of only two surviving vessels from the Pearl Harbor attack, it was armed on that "Day of Infamy" only with fire hoses. A highlight of its rescue work amid explosions and flames was helping to beach the battleship Nevada and keep open the channel out of the harbor.

Hoga's crew fought fires for almost 72 hours on three battleships including the sunken Arizona. Those sustained efforts brought commendation from Admiral Chester Nimitz for "distinguished service, efficient action and disregard of your own personal safety."

There are 25 aged submarines on public display across the United States, including two Russian vessels and a German U-Boat. But only the Razorback shares its site with an intrepid survivor of Pearl Harbor.