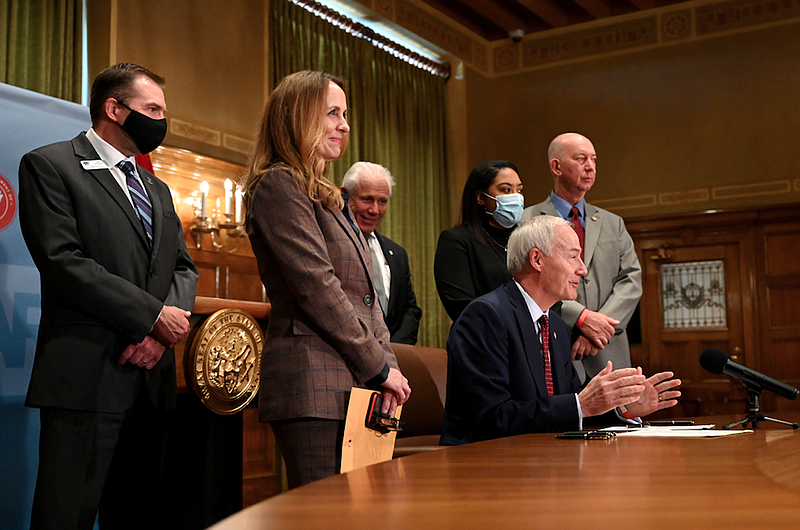 Governor Hutchinson, surrounded by legislators and teachers from Arkansas, signs teacher salary bills SB504 and HB1614 during a press conference at the Arkansas State Capitol on Monday, April 12, 2021. The bills will increase the target median salary for teachers to $52,822, an increase of $2,000, Hutchinson said. (Arkansas Democrat-Gazette/Stephen Swofford)

Arkansas will raise its median teacher salary by $2,000 over the next two years, with Gov. Asa Hutchinson on Monday signing legislation passed by the General Assembly.

Senate Bill 504 by Sen. Missy Irvin, R-Mountain View, and House Bill 1614 by Rep. Bruce Cozart, R-Hot Springs, are identical bills approved by the state Legislature that set up a new category of education funding in the state, the teacher salary equalization fund.

[Video not showing up above? Click here to watch » https://www.youtube.com/watch?v=luocPCoLW6s]

Hutchinson said the state has raised the minimum salary level for teachers over the years, but disparities persist among salaries across the state. He said the law aims to reduce the gap between the highest and lowest salaries and to help districts that aren't at the median salary level to attain it.

"This is an effort to have competitive teacher salaries all across the state of Arkansas, and this helps us to get there," the governor said at a news conference Monday. "This is really moving toward equalization, equitable education across Arkansas."

The legislation allows districts with below-average teacher salaries to raise them using a pool of money equal to the district's average daily enrollment multiplied by $185.

The teacher salary equalization fund is created by shifting $15 million within legislative committee recommendations for public school funding and $10 million from the educational adequacy trust fund.

The measures had broad support in the state Legislature. Both bills cleared the two chambers unanimously.

Carol Fleming, president of the Arkansas Education Association, said teacher salaries vary not only across state lines, but also across city and county lines between neighboring districts within the state.

"We have to do something to make those salaries comparable, and that's what this bill will actually do," Fleming said.

Mike Mertens, assistant executive director of the Arkansas Association of Educational Administrators, said any salary schedule must be approved by the local school board.

"A lot of our schools, through their school board, are already working on implementing the raises," Mertens said.

He said he hadn't heard of any difficulties or hurdles to implementing the raises being expressed by school administrators.

Jim Tucker, superintendent of the El Dorado School District, said the district's School Board was set to vote on increasing teacher salaries Monday night, in anticipation of the legislation being signed.

Tucker said the district had tried to raise its teacher salaries for years and that "it can be a struggle at times."

"Teachers deserve to be fairly compensated. Teachers deserve more than what they get. They are the lifeline of our state, and I am very, very happy about this bill and excited for our teachers," he said.

Based on the new law, the El Dorado School District will get close to $700,000 to raise teacher salaries, Hutchinson said.

Proponents of the plan to raise teacher pay say it will make Arkansas more competitive in recruiting teachers.

"This is an awesome and amazing thing for all teachers here in our state," said Ashley Curtis, a teacher in the El Dorado School District, who added that the pay increase is a way to not only keep great educators but also to attract them.

Arkansas' average teacher salary in the 2018-19 school year fell below that of neighboring states Tennessee, Louisiana, Oklahoma and Texas, and above that of Mississippi, according to the most recent data available from the Southern Regional Education Board.

Hutchinson at Monday's news conference touted other education-related laws that have come out of the current legislative session, including:

• Act 620, which requires audits of school safety and creates an advisory board for the Arkansas Center for School Safety of the state Criminal Justice Institute.

• Act 513, which allows beneficiaries of the Deferred Action for Childhood Arrivals policy, or DACA, who fulfill state requirements to be awarded teaching licenses.

• Act 414, which requires Arkansas students to complete a computer science credit in order to graduate.