Grown: How to get DACA application assistance in Arkansas 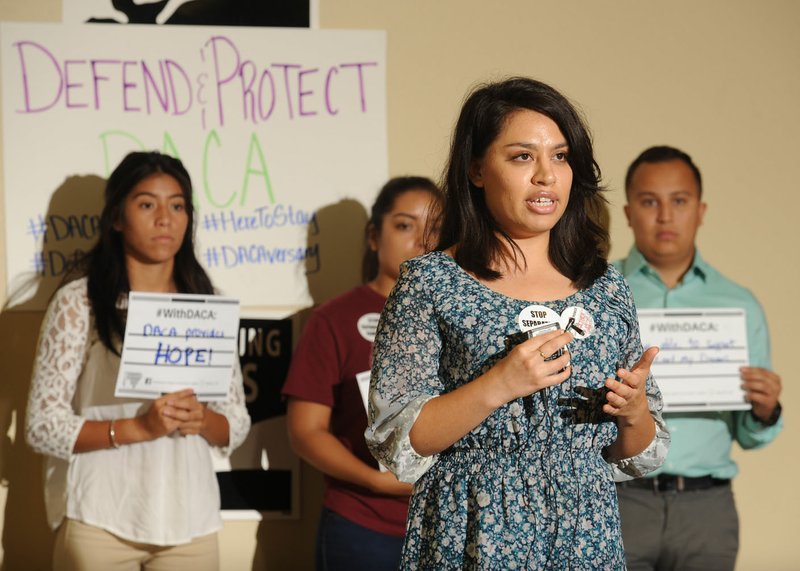 Mayra Esquivel, immigrant integration director for the Arkansas United Community Coalition, speaks Tuesday alongside other Deferred Action for Childhood Arrivals recipients during a news conference at the Northwest Arkansas Immigrant Resource Center in Springdale. The Arkansas United Community Coalition is spearheading an effort to persuade Arkansas Attorney General Leslie Rutledge not to work to cancel the DACA program.

The Migration Policy Institute estimates about 8,000 Arkansans are eligible to receive status under the Deferred Action for Childhood Arrivals, or DACA, program, but only about 4,400 are currently enrolled.

For those seeking status through DACA, here are the basics on the program and getting legal assistance in Arkansas.

The federal administrative program gives a temporary legal status to people living in the United States without documentation who were brought by their parents as children.

Recipients of the program are safe from deportation and can legally work in the United States, and some states have extended additional benefits to enrollees. In Arkansas, DACA recipients pay in-state tuition rates at public colleges and have the opportunity to earn a nursing or teaching license.

What is the current status of the program?

The Trump administration had rescinded DACA, but court cases kept the program going for existing recipients. However, new applications were not accepted during much of Donald Trump’s presidency, said Mayra Esquivel, an accredited representative and advocate with Arkansas Immigrant Defense.

How can Arkansans get help applying for DACA?

Several organizations can help Arkansans with the application process for DACA.

Arkansas Immigrant Defense is a nonprofit that employs attorneys and legal experts to help with a variety of immigration issues, including DACA applications.

“It's a good thing,” Esquivel said. “It means that people are curious, and they should be.”

She encourages anyone who thinks they may be eligible for DACA to get in touch for a consultation.

During this initial meeting, which can be done via phone, AID will determine if the individual might be eligible for DACA or another program that gives legal status to people who are living in the U.S. without documentation.

Immigration clinic at the University of Arkansas law school

Law students at the University of Arkansas provide completely free legal assistance through an immigration clinic.

Clinic director and assistant professor Beth Zilberman said the number of clients the clinic can take on is relatively limited, compared with an organization like AID, but the clinic does offer assistance to people seeking status under DACA, among other things.

“We do assist individuals in all sorts of applications,” Zilberman said. “Usually we get referrals from local nonprofits, but we do also have individuals that we have been alerted to or have called.”

In addition to one-on-one assistance, she said the clinic also puts on one-day events in the community aimed at helping a large volume of people with one thing, such as DACA or naturalization applications.

The organization makes referrals for additional assistance when needed.

Immigration Help is a national nonprofit organization that operates a website to help people apply for DACA.

Fernando Urbina, director of outreach for the organization, said the free website functions similarly to TurboTax by asking questions and populating an application based on a user’s responses.

The application is then sent for a free review by legal experts at the organization to make sure there are no obvious errors before the applicant sends the materials to the government.

Urbina said a handful of Arkansans have used the service so far.

“It's one of those states where we're trying to outreach more to, because we have seen from these few individuals who have used our services that there is a need for it within the state,” he said.