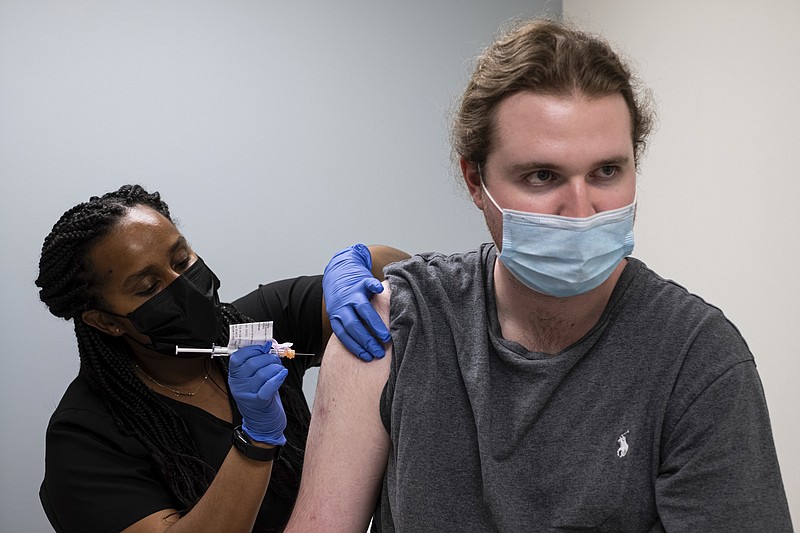 Cole Smith receives a Moderna variant vaccine shot from clinical research nurse Tigisty Girmay at Emory University's Hope Clinic, on Wednesday afternoon, March 31, 2021, in Decatur, Ga. Smith, who received Moderna's original vaccine a year ago in a first-stage study, said returning wasn’t a tough decision. “The earlier one, it was a great success and, you know, millions of people are getting vaccinated now. ... If we’re helping people with the old one, why not volunteer and help people with the new one?” (AP Photo/Ben Gray)

Dozens of Americans are rolling up their sleeves for a third dose of covid-19 vaccine -- this time, shots tweaked to guard against a mutated version of the coronavirus.

While the vaccines currently being rolled out across the U.S. offer strong protection against the coronavirus, new studies of updates to the Moderna and Pfizer vaccines mark a critical first step toward an alternative if the current shots become ineffective against the virus.

[Video not showing up above? Click here to watch » https://www.youtube.com/watch?v=z8pQ6bJgyvg]

"We need to be ahead of the virus," said Dr. Nadine Rouphael of Emory University, who is helping to lead a study of Moderna's tweaked vaccine candidate. "We know what it's like when we're behind."

It's not clear if or when protection would wane enough to require an update, but "realistically we want to turn covid into a sniffle," she added.

The testing comes as the director of the Centers for Disease Control and Prevention said Monday that Michigan needs to "shut things down" to stem the rampant spread of the coronavirus in the state.

Viruses constantly evolve, and the world is in a race to vaccinate millions of people and tamp down the coronavirus before even more mutations emerge. More than 119 million Americans have had at least one vaccine dose, and 22% of the population is fully vaccinated, according to the CDC. Much of the rest of the world is far behind that pace.

An easier-to-spread version found in Britain just months ago already has become the most common virus variant now circulating in the United States, but it's fortunately vaccine-preventable.

But globally, there's concern that first-generation vaccines may offer less protection against a different variant that first emerged in South Africa. All the major vaccine-makers are tweaking their recipes in case an update against that so-called B.1.351 virus is needed. Now experimental doses from Moderna and Pfizer are being put to the test.

"The earlier one, it was a great success and, you know, millions of people are getting vaccinated now," Smith said. "If we're helping people with the old one, why not volunteer and help people with the new one?"

The study, funded by the National Institutes of Health, isn't just testing Moderna's experimental variant vaccine as a third-shot immune booster. Researchers at Emory and three other medical centers also are enrolling volunteers who haven't yet received any kind of covid-19 vaccination.

The study will explore the most effective combination of current and updated versions of the vaccine.

Separately, the Food and Drug Administration has given Pfizer and its German partner BioNTech permission to start similar testing of their tweaked vaccine. The companies called it part of a proactive strategy to enable rapid deployment of updated vaccines if they're ever needed.

The Moderna and Pfizer vaccines, like the majority of covid-19 vaccines being used around the world, train the body to recognize the spike protein that is the outer coating of the coronavirus. Those spikes are how the virus latches onto human cells.

Mutations occur whenever any virus makes copies of itself. Usually those mistakes make no difference. But if a lot of changes pile up in the spike protein -- or those changes are in especially key locations -- the mutant might escape an immune system primed to watch for an intruder that looks a bit different.

The good news is that it's fairly easy to update the Moderna and Pfizer vaccines. They're made with a piece of genetic code called messenger RNA that tells the body how to make some harmless spike copies that in turn train immune cells. The companies simply swapped out the original vaccines' genetic code with mRNA for the mutated spike protein -- this time, the one from South Africa.

Studies getting underway this month include a few hundred people, very different from the large-scale testing needed to prove the original shots work. Scientists must make sure the mRNA substitution doesn't trigger different side effects.

"If we try to vaccinate our way out of what is happening in Michigan, we will be disappointed that it took so long for the vaccine to work," Walensky said during a White House briefing.

Walensky said "the answer" to Michigan's outbreak "is to close things down, to go back to the basics, to go back to where we were last spring and summer" when many states imposed closing orders on restaurants, commerce and public spaces.

She noted that, depending on which of the three vaccines allowed in the United States for emergency use is administered, someone getting a first shot needs two weeks to six weeks to develop immunity against the virus. "It will take so long for the vaccine to have an impact," she said.

Walensky's remarks were the Biden administration's most forceful to date about how to remedy Michigan's surge of coronavirus infections. They came nearly two weeks after Whitmer appealed to the White House to rush more vaccine doses to parts of the country where the pandemic is causing the greatest number of new infections.

Last week, President Joe Biden told Whitmer in a phone call that his administration would provide help to her state, including extra federal vaccinators and therapies such as monoclonal antibodies. But the administration has resisted moving away from a formula for allocating vaccine doses that is based strictly on states' populations.

Until now, administration officials had urged certain states where the coronavirus is making new inroads to pause reopening. Walensky's comments Monday were the first in which senior health officials have called for a state to shut down again.

Earlier Monday, Whitmer again said Michigan's third surge is different because of vaccines. She said that, unlike a year ago, it is known that masks are effective, and the state has adequate testing and personal protective equipment. She has urged -- but not required -- a two-week suspension of in-person high school instruction, youth sports and indoor dining.

"We each have enough information to do our part," she said after touring a vaccination clinic at Eastern Michigan University. "That's what we're calling on people to do -- to do your part."

About 40% of Michigan residents ages 16 and up had received at least one shot as of last week.

The Democratic governor last spring issued a monthslong stay-at-home order to curb the virus, later lifting it. Republican lawmakers successfully challenged the law that underpinned her restrictions. In the fall, amid a second wave of cases, the state Health Department took steps such as closing high schools, prohibiting contact sports and banning indoor service at restaurants and bars. The restrictions were gradually loosened as metrics improved.

Whitmer spokesman Bobby Leddy said Michigan has implemented CDC standards and still has some of the strongest restrictions in the Midwest, including a mask mandate and capacity limits on indoor dining, indoor gatherings and entertainment venues.

"As our nation's top health experts have said, this is not a failure of policy, but rather a compliance, variant and mobility issue, which is why it's important for us to ramp up vaccinations as quickly as possible," he said.

Information for this article was contributed by Lauran Neergaard, Ron Harris and David Eggert of The Associated Press; and by Amy Goldstein of The Washington Post. 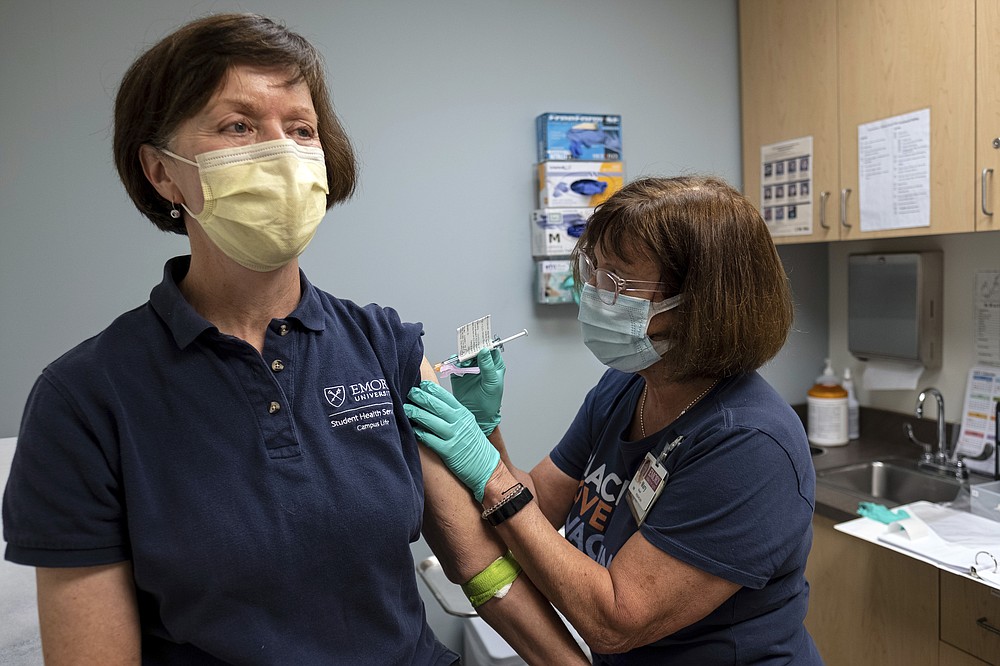 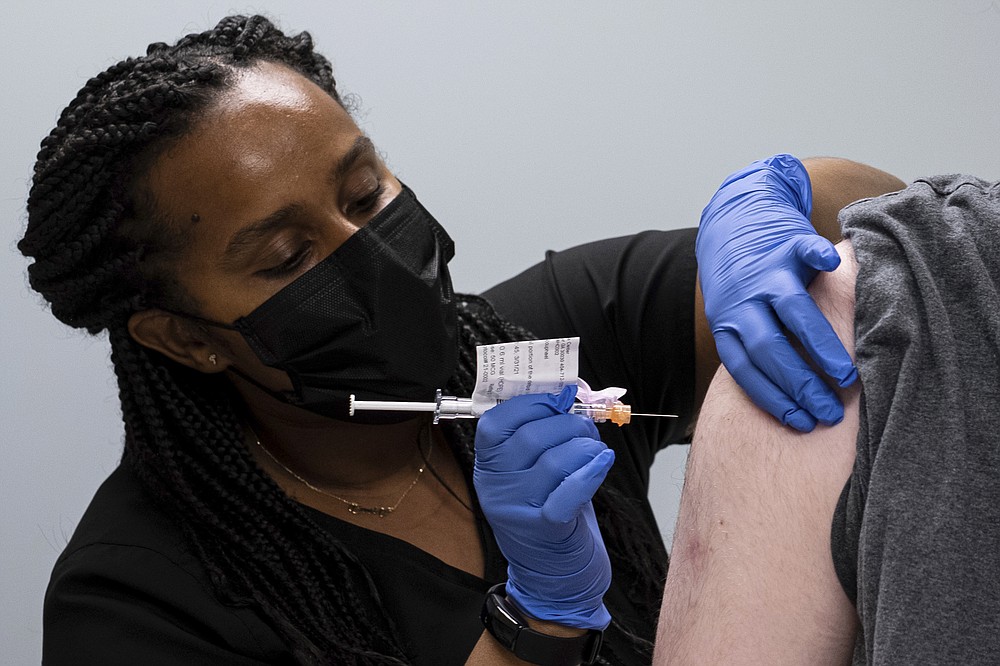 Cole Smith receives a Moderna variant vaccine shot from clinical research nurse Tigisty Girmay at Emory University's Hope Clinic, on Wednesday afternoon, March 31, 2021, in Decatur, Ga. Smith, who received Moderna's original vaccine a year ago in a first-stage study, said returning wasn’t a tough decision. “The earlier one, it was a great success and, you know, millions of people are getting vaccinated now. ... If we’re helping people with the old one, why not volunteer and help people with the new one?” (AP Photo/Ben Gray)
ADVERTISEMENT