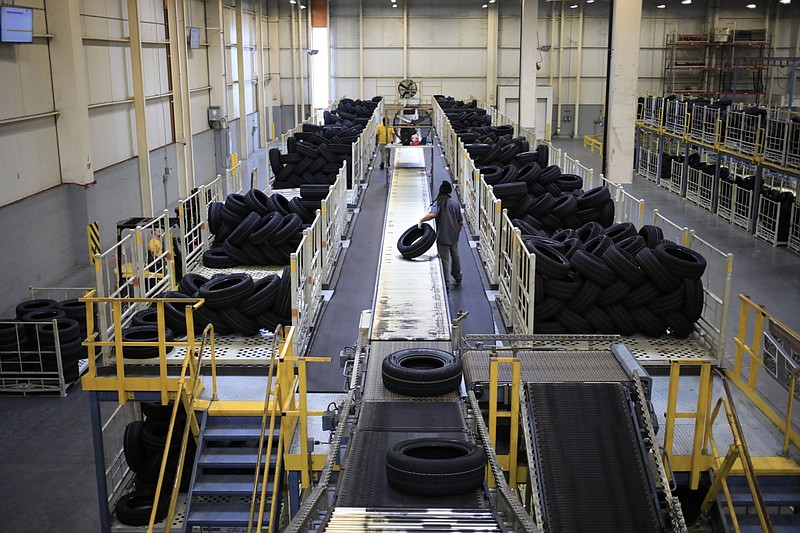 A worker unloads automotive tires at a facility in Sumter, S.C. on March 23, 2021. MUST CREDIT: Bloomberg photo by Luke Sharrett.

Automakers struggling with pandemic-induced plant shutdowns and a global chip shortage are now confronting another headache: Rubber supplies are dwindling.

Snarled shipping lines are disrupting the movement of natural rubber, a key material used in tires as well as components under the hood. With the global supply already running short because of stockpiling by China and a devastating leaf disease, rubber prices are on the rise and some U.S. auto suppliers are rushing to secure shipments before the market gets squeezed further.

As companies in virtually every market grapple with shortages, perhaps no industry is being hit harder than automotives. Multiple plants have been idled by a semiconductor shortage that's costing tens of billions of dollars in lost revenue, while materials such as seating foam, metal and plastic resin are also becoming harder to find. The industry, which has long relied on just-in-time manufacturing to reduce costs, is finding it has limited flexibility to deal with supply chain disturbances wrought by the pandemic.

Rubber supply problems could prove particularly thorny because the trees need seven years to mature, making it unlikely the supply will quickly bounce back.

"It's like paper towels early on during the covid crisis," said Steve Wybo, who leads the auto practice group at consulting firm Conway MacKenzie outside Detroit. "If you can get your hands on some plastic, or some rubber, you're going to order more than you need because you don't know when you're going to be able to get it next."

Carmakers including Ford and Stellantis, formerly known as Fiat Chrysler, say they're monitoring the rubber situation but have yet to feel an impact. General Motors, similarly, said it isn't worried about its rubber supply. France-based Michelin, one of the world's largest tire-makers, is skirting port congestion by using air freight shipments directly from Asia.

But for suppliers reliant on U.S. distribution, rubber is already a concern.

"I've got everybody alerted that I'll take materials as fast as they can get it to me," said Gary Busch, director of global procurement at Carlstar Group, which makes tires for off-road vehicles and tractors.

Natural rubber is produced from the white sap of trees found in the warm, humid climates of countries such as Thailand and Vietnam. While petroleum-derived synthetic rubber is preferred for some applications, the natural version has properties that are critical for products such as gloves and packaging tapes -- both of which have seen demand rise during the pandemic. And as the critical component in tires and anti-vibration parts under the hood, it's more closely associated with the auto industry than any other.

The rubber industry is dominated by smallholders, making it difficult for producers to adjust quickly as demand changes, prices fluctuate or supply chain problems emerge. It's not the only commodity market finding there's no easy fix: There could be a copper shortfall of 10 million tons by 2030 if no new mines are built, according to commodities trader Trafigura Group.

Thailand, the world's biggest rubber producer and exporter, had struggled with persistently low prices for several years before the pandemic, leading farmers to tap more trees to compensate for lower income -- and giving them little incentive to plant more. Supply has tightened on demand for rubber gloves during the pandemic, and it has also been depleted by natural elements, including drought, floods and a leaf disease in the world's top-producing countries.

"It's definitely tightening up," said Ann Marie Uetz, a Detroit-based partner at the law firm Foley and Lardner LLP, which represents auto-parts manufacturers. "It's nowhere near the level of the chip shortage from our perspective so far, but it's definitely brewing."

Supply issues didn't start to hit the U.S. until the second half of last year, when China, the world's biggest auto market and top consumer of natural rubber, took advantage of low prices and a recovery in its economy to make substantial purchases, said Whitney Luckett, owner of Simko North America, a Colorado Springs, Colo.-based distributor of natural rubber -- one of just three in the U.S. She noticed China was stockpiling rubber for its national reserves in part through purchases from Vietnam, which makes a unique rubber grade used in tape, bandages and the sidewalls of vehicle tires.

The buying binge kept China's 2020 purchases of natural rubber nearly even with the previous year, even as pandemic-related disruptions sent U.S. imports plunging 16%, according to a January report from the Malaysia-based Association of Natural Rubber Producing Countries.

"Once the buying started, it didn't just stop with China; a lot of the tire companies were also coming back and buying rubber," Jones said. "The supply of rubber in the U.S. became very tight."

The situation is exposing the perils of just-in-time manufacturing practices that have been auto industry gospel for decades, according to Tor Hough, founder of the supply chain research firm Elm Analytics. By keeping inventory lean to control costs, companies are vulnerable during periods of heightened supply chain volatility. The semiconductor shortage -- exacerbated by automakers lowering orders during covid-19 shutdowns -- could cost $61 billion in lost revenue this year, according to the advisory firm AlixPartners. 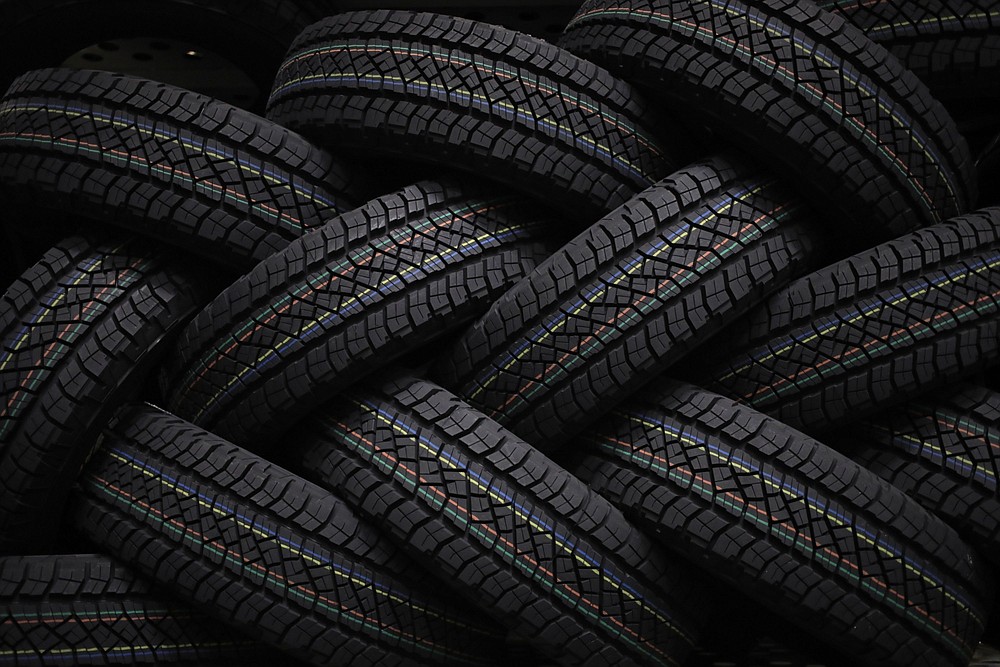 Automotive tires are stacked at the Continental Tire distribution center in Sumter, S.C., on March 23, 2021. MUST CREDIT: Bloomberg photo by Luke Sharrett. 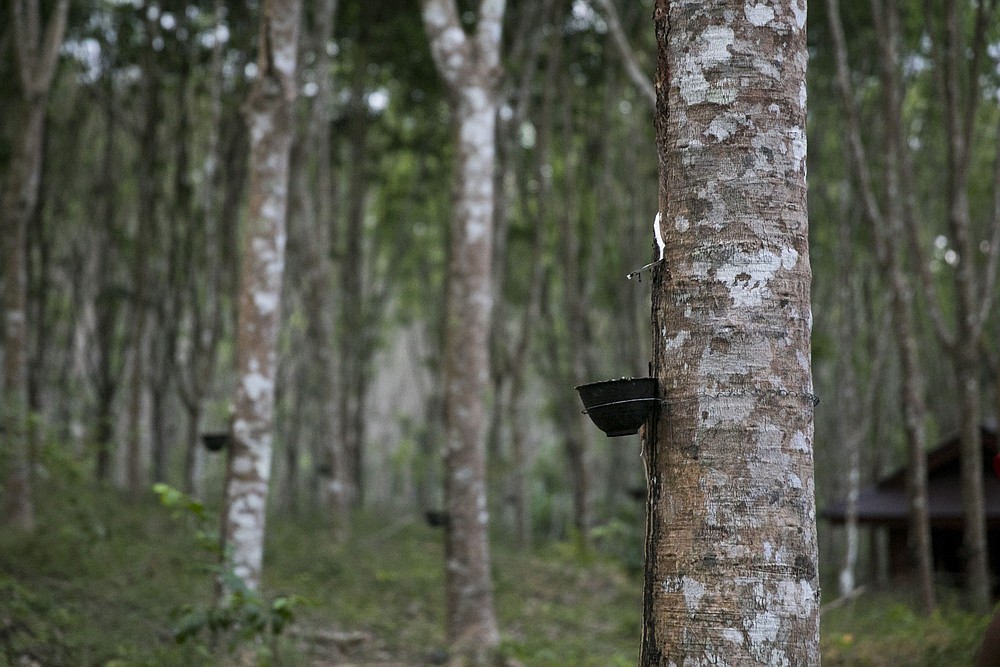 Rubber sap drips from a tree at a plantation in Chawang, Thailand, on Jan. 31, 2019. MUST CREDIT: Bloomberg photo by Brent Lewin.
ADVERTISEMENT