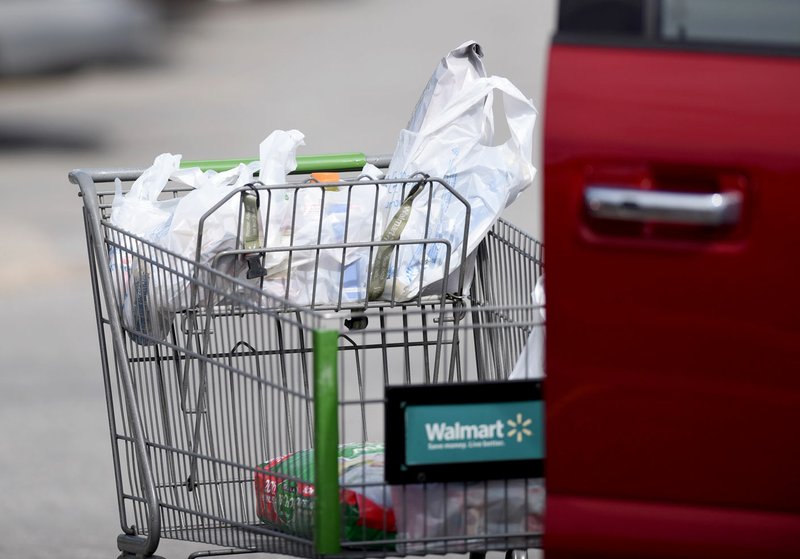 FILE — Groceries are transported in plastic bags in the parking lot of the Walmart Neighborhood Market on Martin Luther King Jr. Drive in Fayetteville in this March 1, 2020 file photo. (NWA Democrat-Gazette/David Gottschalk)

A state Senate committee on Tuesday backed legislation that would prevent any municipal or county government from restricting the use of certain containers, such as plastic bags or to-go containers.

State Rep. David Ray, R-Maumelle, told the Senate Committee on City, County and Local Affairs that having a variety of local ordinances across Arkansas is not conducive for businesses and is costly for consumers. His legislation, House Bill 1704, is about creating uniformity in commerce, he said. The bill passed in the House in a 69-15 vote on April 7, and the Senate committee endorsed it on a voice vote with no audible dissent.

Ray said his bill has broad support, including from the National Federation of Independent Businesses; the Arkansas Grocers and Retail Merchants Association; and associations for hospitality, oil marketers and beverages.

"If I have stores in 10 different locations, I don't want to be playing by 10 different sets of rules," said Steve Goode, executive director of the Grocers and Retail Merchants Association. "We want the same rules throughout the state."

The Arkansas Municipal League is fundamentally against preemptive bills like this one, Executive Director Mark Hayes said.

"We think city officials and the citizens within the city know best what's good for them and don't need to be dictated to," he said.

HB1704 would prohibit cities and counties from restricting the use of "auxiliary containers," which are defined as bags, cups, packages, containers, bottles, devices or other packaging that is made of cloth, paper, plastic, foamed plastic, expanded plastic, cardboard, corrugated material, aluminum, glass, post-consumer recycled material or similar coated or laminated material.

"This bill doesn't just impact grocery stores; it impacts convenience stores, it impacts our restaurants that serve straws, all sorts of things," Ray said. "Our businesses buy these products in extremely large quantities to take advantage of economy of scale, and so having a patchwork regulatory framework impedes their ability to do that."

Private businesses would still be free to self-impose these types of container bans on their own.

Similar measures to prevent container ordinances have been passed in 25 other states, Goode said. At least 10 states and hundreds of cities across the country have bans or restrictions on single-use plastic bags.

Fayetteville is the only city in Arkansas that has adopted such a ban. On Nov. 5, 2019, the Fayetteville City Council approved an ordinance banning the use of single-use expanded polystyrene foam -- commonly called by the brand name Styrofoam -- such as plates, bowls or cups by any business providing prepared, ready-to-eat food or drinks, with noncompliance fees of up to $250 per day. The ban was implemented on July 1.

Fayetteville was also in the process of drafting bag legislation to address litter and water quality in the city, but it was put on hold in March 2020, said Peter Nierengarten, environmental director for the city. He spoke against the bill Tuesday.

Plastic bags are the No. 1 litter item pulled out of Fayetteville streams, and if not cleaned up, they can take 500 years to break down, Nierengarten said.

"This bill would have negative impacts on aesthetics and for our environment. Oftentimes, disposables wind up in our streams and waterways and contaminate our drinking water supply, our streams and lakes we use for recreation, and potentially clog our stormwater drainage systems," he said in an interview. "These create a whole host of issues that are really best dealt with at the local level rather than creating a statewide, blanket requirement."

In January 2020, a Little Rock task force online survey showed that 68.3% of the nearly 4,000 Little Rock residents and visitors who responded said they would support a ban or fee on single-use plastic bags in stores. The survey was to be included in waste-reduction recommendations the task force would present to the city's Board of Directors. However, this presentation was also put on hold because of the pandemic, Ward 3 City Director Kathy Webb said.

Webb said the task force still plans to present and that it believes the city should continue to have the local control to decide whether to enact such ordinances.