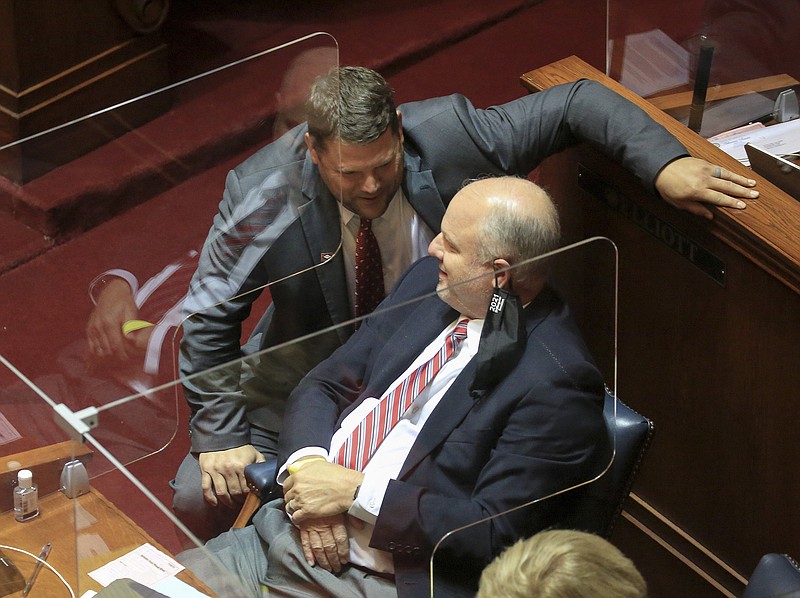 Legislation to rename Confederate Flag Day to Arkansas Day advanced from a House committee on Wednesday.

McCollum said Confederate Flag Day wasn't put into state law immediately after the Civil War, but instead in response to events in the 1950s that included the Little Rock Central High School desegregation crisis.

"This isn't a reflection of history, this is a reflection of racism that was rampant in that day," committee member Rep. Justin Gonzales, R-Okolona, who voted for the bill, said.

Committee member Rep. Nelda Speaks, R-Mountain Home, who voted against the bill, asked why McCollum and proponents of the bill didn't choose a different day for Arkansas Day. McCollum said some lawmakers felt changing the date would send the wrong message to people who like participating in reenactments on that day.

According to the legislation, "Arkansas Day shall be a day to reflect on the rich history, national treasures, diverse cultures, unmatched hospitality, shared spirit, and human resilience that make the people of this state proud to be Arkansans."

The committee sent the bill to the full House on a 13-3 roll call vote, with three lawmakers not voting.

House lawmakers voted Wednesday to bar the state, or any local government in Arkansas, from mandating covid-19 vaccinations.

Private businesses would also have the option to require their employees to get the vaccine.

Gov. Asa Hutchinson announced earlier this month that he would not require employees of state agencies to receive the vaccine.

The bill passed on a 78-1 vote to send the bill to the Senate.

Legislation to create a statewide task force charged with studying methods of collecting court fines, fees and restitution was advanced to the Senate floor Wednesday by the Senate Judiciary Committee.

The bill would also authorize the Department of Corrections to compile information about outstanding warrants and misdemeanor cases across the state for prisoners in the system, and to provide "assistance" to those prisoners to enter plea agreements and resolve their cases remotely.

Corrections Secretary Solomon Graves spoke for the bill Tuesday, saying it would help boost collections and create a centralized statewide system that people can check to see how much they owe.

Rep. Mark Lowery, R-Maumelle, said hazing is being done by faculty at schools in Arkansas and they should be held accountable in the same way that students, fraternity members and alumni are in the law.

Lowery gave the example of "privilege walks" -- an exercise in which students are separated based on their answers to questions about their backgrounds -- as well as football coaches singling out athletes for extra laps.

House lawmakers rejected a bill Wednesday that would allow municipalities to install automated red-light cameras or speed traps for the purposes of ticketing drivers.

Under current law, automated devices meant to catch traffic violations are allowed only in limited circumstances or if a police officer is on the scene to conduct a traffic stop. House Bill 1858, by Rep. Jay Richardson, D-Fort Smith, would remove many of those provisions and allow local authorities to issue tickets strictly off information captured on automated traffic cameras.

The bill faced opposition from some lawmakers, who said companies charged with collecting tickets in other jurisdictions were harassing drivers caught by traffic cameras.

The Legislature gave its final approval to a bill that would expand the power of the state Board of Election Commissioners to investigation complaints.

House Bill 1803, by Rep. Mark Lowery, R-Maumelle, would give the state board the power to institute corrective actions in response to those complaints and expand the types of violations about which county election boards can make complaints.

The Senate approved the bill in a 33-1 vote, with Sen. Stephanie Flowers, D-Pine Bluff dissenting. The bill now goes to Gov. Asa Hutchinson.

The Senate voted to send a ban on municipal ordinances that restrict the use of certain containers, such as plastic bags or to-go containers, to the governor on Wednesday.

Sen. Greg Leding, D-Fayetteville, spoke against the bill. Fayetteville is the only city in the state that has adopted such a ban, which Leding said is popular and successful.

The bill was sent to Gov. Asa Hutchinson on a 24-6 vote, with Democrats opposed and five lawmakers not voting.

Legislation to prohibit public schools from engaging in any transaction with abortion providers, including accepting free instruction for students, was sent to the Senate on Wednesday.

Jerry Cox, executive director of the Arkansas Family Council, said House Bill 1592, by Rep. Mark Lowery, R-Maumelle, is in line with other laws that have been enacted that bar public entities from contracting with abortion providers.

Cox said personnel from Planned Parenthood, the "largest provider and promoter of abortions," have provided sex education instruction on topics including birth control and sexual identity in Arkansas schools.

Sen. Linda Chesterfield, D-Little Rock, said she was concerned that the bill could prevent parents who work at Planned Parenthood from volunteering in their child's school.

Since it was introduced, the bill was amended to prohibit schools from "knowingly" engaging in those transactions, Cox said.

The bill was sent to the full Senate on a divided voice vote.