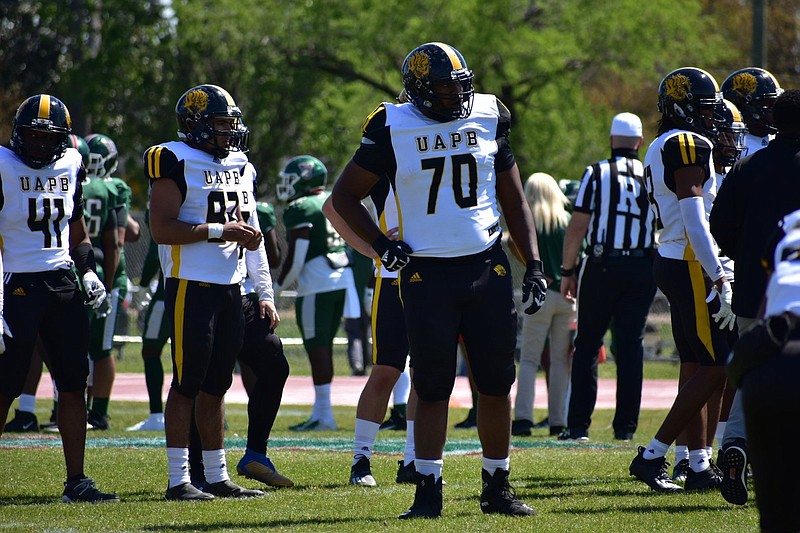 At 6-feet-5 and 305 pounds, Noah Hayes stands slightly taller than the rest of University of Arkansas at Pine Bluff offensive line.

The redshirt sophomore has worked his way to the starting lineup with the help of first-team all-conference standouts in Mark Evans II and Atondre Smith, who line up on quarterback Skyler Perry's left side, opposite Hayes.

Given the wealth of playmakers, the offensive line may often be overlooked as a key cog in the Golden Lions' 3-0 record, their best start to a season at least since 2000. The offense still ranks fourth out of 10 teams in the Southwestern Athletic Conference in total offense with an average of 394.7 total yards per game and protects Perry in the second-leading passing offense in the conference at 273.7 yards per game.

"It starts with them first," said Tyrin Ralph, a redshirt senior whose 77-yard punt return was the difference in UAPB's most recent victory at Mississippi Valley State on April 3. "They have to game plan just like us. If they can't get going, we can't get going. We put our trust in them, and we just follow them. They are the main heart of the offense."

Hayes spelled out the ingredients to the offensive line's success in the spring of 2021.

"Just keep pounding the ball, never give up, do your assignment, beat your opponent, do your individual assignment," he said. "Basically, we play for each other. If we mess up one play, we pick up each other and keep on going. That's how football works."

Seniors like Smith are playing under their fourth offensive line mentor, Golden Lions Coach Doc Gamble said. Bill Nickell has been on the staff since January, but he's already left his mark on a team mixed with youth and experience.

"I think the first thing is coming in and setting a standard, making sure they understand we have to get the ball to whoever needs the ball," Nickell said. "This isn't about us. So for us as an offensive line unit, we need to be multiple, aggressive, physical and sound."

It's what Nickell calls his "MAPS to success," and the success starts with Nickell, Gamble pointed out.

"We've got a good o-line coach who's been a great addition to our staff," Gamble said. "We've got two all-conference guys in Mark Evans and A.J. Smith, and they're playing well, but a pleasant surprise has been [redshirt senior center] Eric Jones and Noah Hayes. Those guys spent the last couple of years on the scout team. Now that their number is getting called, they're able to step up and help provide a good unit up front."

Gamble tells his recruits it's very seldom they will play under the same position coach in an entire college football playing career, but the new hire is going to be better. That's what Gamble feels he's found in Nickell, whom he coached with at Kent State in Ohio.

"For those guys to take to Coach Nickell has been tremendous," Gamble said. "He demands excellence from those guys, so they have exceeded expectations right now, to be honest with you."

Defensive units are taking their best shot against the offensive line of an undefeated team, Nickell believes, but he's training the unit to match their opponents' intensity.

"One thing that's kind of a big misconception about the offensive line and offense in general -- we're supposed to be the guys attacking," Nickell said. "We're here to offend and take the fight to you. To be able to match that physicality and understand you're not sneaking up on anyone anymore, you're going to catch the best shot anybody can take at you."

Stadium notes: Gates open at 1 p.m.; covid-19 guidelines will be enforced including wearing of face masks unless consuming refreshments