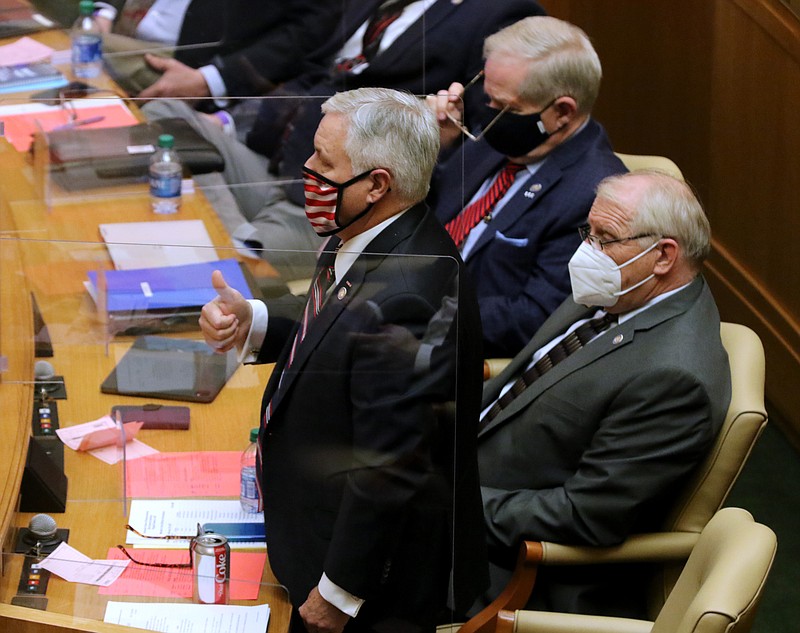 A pair of bills that would direct law enforcement officers in Arkansas to ignore the enforcement of federal gun laws was sent by the House on Thursday to Gov. Asa Hutchinson, who has expressed skepticism about the measures.

The Republican governor did not say Thursday whether he would sign or veto the bills, and a spokeswoman said he was still completing his review of them.

In an earlier statement, Hutchinson said "my first impression is that law enforcement will have significant constitutional concerns on those bills."

One of the bills, Senate Bill 298, would prohibit the Arkansas State Police and local law enforcement authorities from working with federal authorities to enforce federal gun laws that "infringe" on the Second Amendment.

The bill singles out two federal laws -- the National Firearms Act, which regulates machine guns and sawed-off shotguns, and the Gun Control Act of 1968, which regulates the interstate sales of firearms -- as "null and void." However, the measure doesn't specify who would have the authority to declare other federal laws unenforceable.

(A similar measure, House Bill 1386, would apply only to federal laws enacted after Jan. 1 of this year. The House voted to send the bill to the Senate on Thursday.)

"If the federal government decides to come into the state and enforce their own laws, they can do that, we can't stop them and I'm not trying to do that," said state Rep. Justin Gonzales, R-Okolona, sponsor or co-sponsor of several gun-related bills. "What this says is that we will not assist them."

During committee hearings over the past few weeks, Republicans raised the spectre of mass confiscations of weapons under the administration of President Joe Biden, a Democrat. Presenting SB298 on Thursday, Rep. Brandt Smith, R-Jonesboro, said the bill was in response to "infringement and overreach from a federal government that is out of control."

Biden's administration has proposed some new restrictions on firearm ownership, such as requiring background checks for private gun sales, but he has not proposed large-scale confiscation of guns.

The other measure sent to the governor Thursday, Senate Bill 59, would apply to any firearms manufactured and kept in the state, and would declare them off-limits to regulation by either federal or state authorities.

"If it's made in Arkansas and stays in Arkansas, it's regulated by Arkansas," Gonzales said of the bill, which he also sponsored.

The only members to speak against either bill Thursday were Democrats, who said that enacting either law would pit authorities against one another and potentially violate the Constitution.

"We cannot keep acting like federal regulations are a buffet that we can choose from," said Rep. Ashley Hudson, D-Little Rock.