$9B in DHS funds fails to clear House for 3rd day 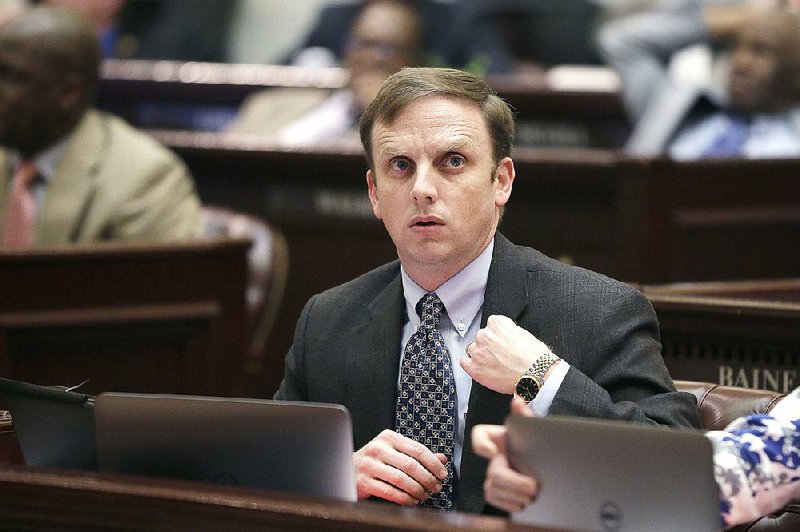 More than $9 billion in state and federal funds for Medicaid and other Department of Human Services programs remained stalled in the House for a third consecutive day, as a vote Thursday on the measure fell 11 votes short of passage.

The appropriation, Senate Bill 55, actually lost several votes from an earlier roll call the day before, and fell Thursday on a 64-23 vote. Like all appropriations, the bill needs a three-quarters majority in the 100-member House to pass.

Legislative leaders and Gov. Asa Hutchinson continued to express calm Thursday, noting that the annual appropriation vote has often been beset by hangups in recent years.

Speaking to reporters Thursday, House Speaker Matthew Shepherd, R-El Dorado, expressed confidence that the bill would pass next week and said he would cast the decisive 75th vote if needed.

"I don't think it's any real surprise," Shepherd said. "We've seen in the last number of sessions that historically this appropriation would be defeated a time or two, or maybe more. I still anticipate that we'll ultimately pass the appropriation as it is."

The state's Medicaid program makes up the vast majority of the spending included in the bill and provides health care to more than 1 million Arkansans, according to the latest figures from the Human Services Department. The program includes both traditional Medicaid and the private option expansion program adopted in 2013 that provides health insurance to poor people. That expansion continues to be a source of frustration for some Republican lawmakers.

"There are always a lot of dynamics toward the end of a session and an appropriation bill can always get caught in the crosswinds," Hutchinson said in a statement. "This is a fundamental legislative responsibility, and I expect the General Assembly to pass the necessary appropriation bills."

The Senate passed SB55 on its first try in late March, voting 28-5 to send the bill to the House.

Hutchinson's latest overhaul of the Medicaid expansion program will encourage recipients to work to gain access to government-subsidized private insurance plans. Enrollees who fail to meet the incentives will be moved to traditional Medicaid under the new plan, called Arkansas Health and Opportunity for Me (ARHOME). The state will request a waiver from the federal government to operate the program.

The medical services appropriation for fiscal 2022, which begins July 1, includes $6.6 billion in federal funds and $2.08 billion in state matching funds, according to Department of Human Services spokeswoman Amy Webb.

Of that, $1.96 billion in federal funds and $218 billion in state funds were allocated to the Medicaid-expansion/ARHOME program.

Unlike the two previous days, no motion was made on Thursday to pull funding for the Medicaid-expansion program out of the appropriation for a separate vote.

Lawmakers in the House Public Health, Welfare and Labor Committee on Thursday rejected 9-6, House Bill 1428 by state Rep. Josh Miller, R-Heber Springs, to end the use of private health plans for Medicaid-expansion enrollees and move them all to the traditional Medicaid fee-for-service model.

"The insurance companies are the biggest benefactors [of Medicaid expansion] and I don't think that's right," Miller said.

A purely fee-for-service model would reduce state expenditures for Medicaid expansion by about $180 million over five years compared with the current ARHOME plan, according to DHS estimates.