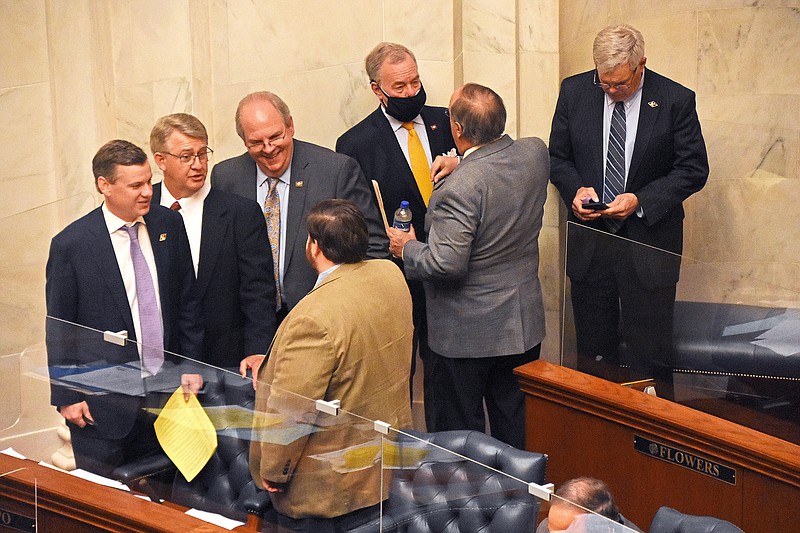 Legislation setting up a committee to address schools' compliance with the Americans with Disabilities Act was recommended to the Arkansas House on Thursday.

The bill also would require all public school districts to include a plan to update their facilities to ensure Americans with Disabilities Act compliance in their master plans, as well as submit assessments of their facilities by Feb. 1, 2024.

A bill to replace the state's Confederate Flag Day with "Arkansas Day" passed in the state House on Thursday.

House Majority Leader Austin McCollum, R-Bentonville, said the change is an opportunity to "correct the record," since Confederate Flag Day was established in response to integration and not immediately after the Civil War.

McCollum said his bill doesn't affect anyone's ability to display or celebrate the Confederate Flag or participate in reenactments on that day if they choose.

House Bill 1916 states that "Arkansas Day shall be a day to reflect on the rich history, national treasures, diverse cultures, unmatched hospitality, shared spirit, and human resilience that make the people of this state proud to be Arkansans."

The holiday is the Saturday before Easter.

The measure passed 80-7 and now heads to the Senate.

The House voted Thursday to recall a pair of bills from the Senate so that the sponsors could work on amendments.

The recall affected House Bill 1156, which seeks to modify funding for the state's 911 systems, and House Bill 1641, which would provide a sales tax exemption for the Young Men's Christian Association.

The sponsors of the bills acknowledged unspecified concerns raised by senators and asked to be allowed to work on each measure in the House.

Both recalls were approved on a voice vote without debate.

The House approved a bill Wednesday to require an abortion clinic to report a rape to law enforcement officials if a patient attempts to abort a pregnancy resulting from the crime.

Senate Bill 463, by Sen. Blake Johnson, R-Corning, would add the reporting requirement to sections of the code dealing with exemptions allowing abortions in cases of rape or incest.

The bill also would add requirements to inspections of abortion clinics by the Health Department.

The bill cleared the Senate last month. The 69-15 vote in the House on Thursday sent the bill to Gov. Asa Hutchinson over the objections of Democrats.

Legislation requiring schools to assess the adverse circumstances a child may have faced before being placed in an alternate learning environment or suspending a youth for more than 10 days fell short in the Arkansas House on Thursday.

Senate Bill 140 by Sen. Jonathan Dismang, R-Searcy, failed in the House on a 50-38 vote, 13 votes shy of approval. The Arkansas Department of Education supports the bill.

Lawmakers who spoke against the bill said it would create difficulties for teachers.

A bill to require public schools newly constructed or totally renovated on or after July 1 to include a certain number of water-bottle filling stations is headed to Gov. Asa Hutchinson.

Senate Bill 532 by Sen. Jane English, R-North Little Rock, passed in the House on a 83-5 vote, with one lawmaker voting present.

The state Senate on Thursday gave its final approval to a bill that would allow law enforcement agencies to charge records-requesters for costs associated with reviewing and redacting audio and video footage.

After concurring with a House-approved amendment to Senate Bill 346 by Sen. Jason Rapert, R-Conway, the Senate voted 27-1 to send the bill to the governor.

The legislation permits state and local public safety agencies, jails and dispatch centers to charge requesters up to $20 per hour for each hour of running time of audio, video or audiovisual media provided to the requester, beyond the first three hours of personnel time required to fill the request.

The Senate on Thursday approved a resolution for the General Assembly to ask Congress to propose an amendment to the U.S. Constitution to require that the U.S. Supreme Court be composed of nine justices.