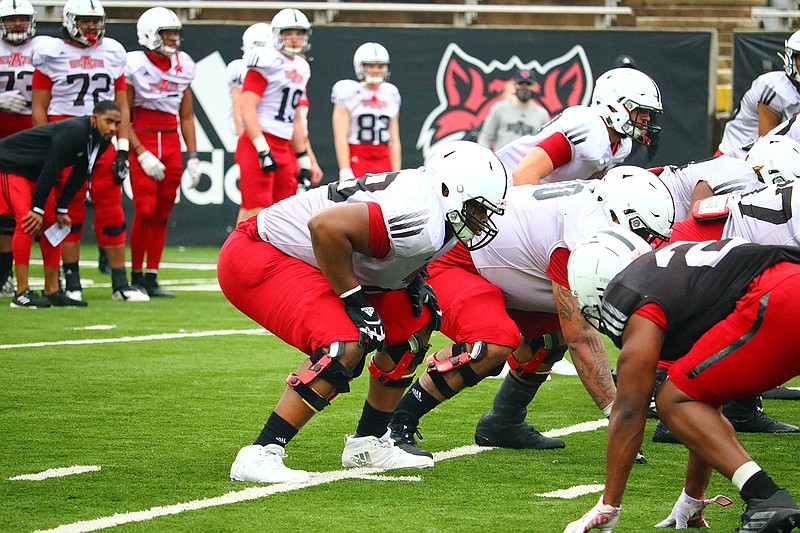 Senior Avery Demmons (center), a 6-6, 300-pound lineman who appeared in seven games in 2020, has caught the attention of Arkansas State coaches for his progression this spring. (Photo courtesy Arkansas State Athletics)

JONESBORO -- In meeting rooms and on the field, Arkansas State University offensive line coach Matt Limegrover has no time for independent contractors -- players who break from fundamentals and the five-man unit of the Red Wolves' offensive line.

Instead, Limegrover insists his group of 17, 280-plus pound linemen operate less like football players and more like the Olympians who compete in a hybrid sport that combines dance, gymnastics and swimming.

"On the offensive line, [he says] we all have to be like synchronized swimmers," senior lineman Andre Harris Jr. said. "We've all got to be on the same page as one spirit out there."

The expectation of lockstep precision has become the norm for ASU's O-linemen under Limegrover, who joined head coach Butch Jones' staff in January.

The long-time Big Ten assistant inherited an ASU offensive line with four returning starters in Harris at left guard, senior Jacob Still at center, senior Ivory Scott at right guard, and senior Wyatt Luebke, a defensive convert who offered versatility across the line in 2020. Their stability leaves ASU to solidify a fifth starter and needed depth across the position group.

Additions to the thin core of offensive lineman took a hit this week with the decommitment of Cincinnati transfer Jakari Robinson, and the Red Wolves are expected to address the position with their remaining open roster spots. Among those on the current roster who has separated themselves this spring is senior Avery Demmons, who appeared in seven games in 2020. The 6-6, 300-pound lineman stepped in seamlessly when Harris missed time earlier in spring camp and -- according to Jones -- stands out as a player who could factor in come the fall.

"He has continued to progress over the course of the spring," the first-year head coach said. "[Missing Harris] made us realize how valuable Avery is up front. Not just from a schematical standpoint, but from a mentality standpoint, as well."

Despite the largely familiar personnel up front, life under Limegrover on the offensive line is different this spring, centered on the quest for achieving a synchronized unit. At the core of building a physical and cohesive offensive line are fundamentals, and the 52-year old assistant who spent his past 10 seasons at Minnesota, Penn State and Michigan is focused on building from the ground up -- literally.

"He starts with getting your feet working," Harris said of Limegrover, who has not been made available to media this spring. "Then you work up the legs and to the hands. Coach Limegrover focuses on every little thing."

In laying a foundation with the small things, ASU's offensive line intends to tackle the big ones.

Jones has harped on physicality on the offensive line since his hiring in December with a goal of improving on a running game that finished seventh in the Sun Belt with 1,379 yards last season. With Limegrover -- who Jones called "an excellent teacher of the game" -- the Red Wolves' linemen have been introduced to new approaches to technique and positioning honed in the Power 5, and translating it into power up front.

"A lot of people just think it's whoever is the strongest," Harris said. "It's so much more than that. It's being fundamentally sound every play."

Sharpening the fundamentals and reaching the harmony Limegrover aspires to for his offensive line remains a work in progress, and ASU's search for a final starter and competitive depth will carry into the summer. But under new leadership, a new path is being paved for ASU.

"I think our offensive line has improved greatly from practice No.1 to practice No. 13," Jones said. "I think a lot of that is because of coach Limegrover."