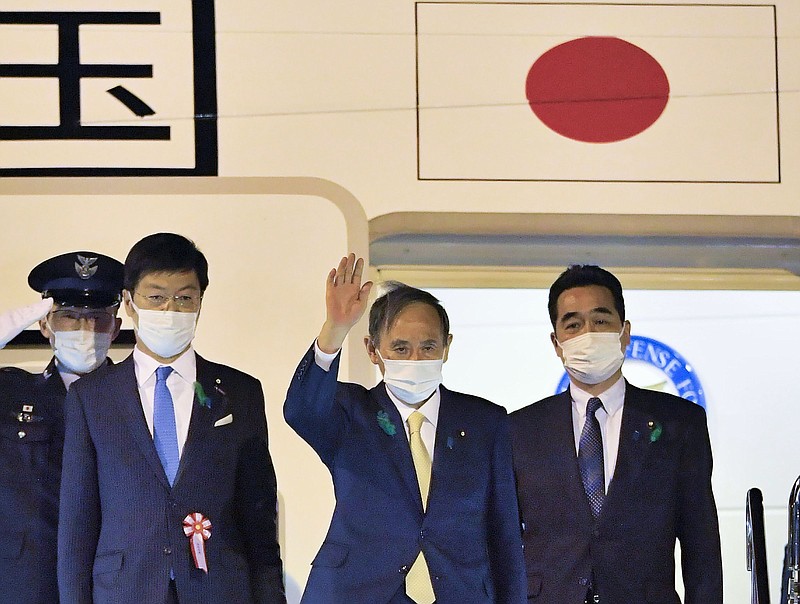 “I hope to develop a relationship of trust with President Biden,” Japanese Prime Minister Yoshihide Suga (center) said Thursday as he leaves Tokyo for the U.S. Suga will be the first foreign leader to have face-to-face talks with President Joe Biden. (AP/Kyodo News)

TOKYO -- Japanese Prime Minister Yoshihide Suga left for Washington on Thursday for talks with President Joe Biden meant to show the strength of their security alliance at a time when both nations are concerned with China's growing economic and military clout.

The talks will be Biden's first face-to-face meeting with a foreign leader since he took office, and they follow four years of uncertainty for the Japan-U.S. alliance under former President Donald Trump's administration.

"I hope to develop a relationship of trust with President Biden and further strengthen the Japan-U.S. alliance bound by the universal values of freedom, democracy, human rights and rule of law," Suga told reporters at his office before heading to Tokyo's Haneda International Airport.

At today's talks at the White House, Suga said he and Biden will "compare and adjust our policies, and we will demonstrate to the rest of the world the leadership of Japan and the United States toward achieving a free and open Indo-Pacific region."

Japanese officials said Biden and Suga are expected to discuss how to manage the peace and stability of regional seas, including the Taiwan Strait, where tensions are rising. They are also expected to discuss the human rights situation in Hong Kong and China's northwestern Xinjiang region.

Japan has taken a milder approach to allegations of Chinese human rights violations and has not joined the United States and European nations in imposing sanctions. Gen Nakatani, a ruling party lawmaker and former defense minister, is leading a nonpartisan parliamentary group calling for Suga's government to take tougher steps, including sanctions, to be in line with Western democracies, but a decision has not been made.

Japan considers China's growing military activity in the region as well as its broad territorial claims to be a security threat. Japan is itself locked in dispute with China over Beijing's claim to the Japanese-controlled Senkaku Islands, called Diaoyu in China, in the East China Sea.

Tokyo also has watched with concern as China has built military installations on disputed territory it claims in the South China Sea.

The U.S., meanwhile, has butted heads with China over numerous issues, including the coronavirus pandemic, human rights, Chinese policy in Hong Kong, Xinjaing and Tibet, and trade. To erode China's claims on the South China Sea, U.S. ships regularly conduct "freedom of navigation" operations, sailing into international waters that China is trying to claim as its own.

China denies it is expansionist and says it is only defending its territorial rights. It says the largest threat to regional peace and stability is the U.S.

Also on the cards for the talks between Biden and Suga are the ongoing fight against the pandemic, covid-19 vaccine cooperation to support developing countries, establishing less China-reliant supply chains and climate change, Japanese officials said.

Suga, who has set a goal of achieving a carbon-neutral society by 2050, said he hoped to closely cooperate with Biden to jointly lead international efforts to tackle the issue when the U.S. hosts a virtual climate change summit just a week after their meeting. 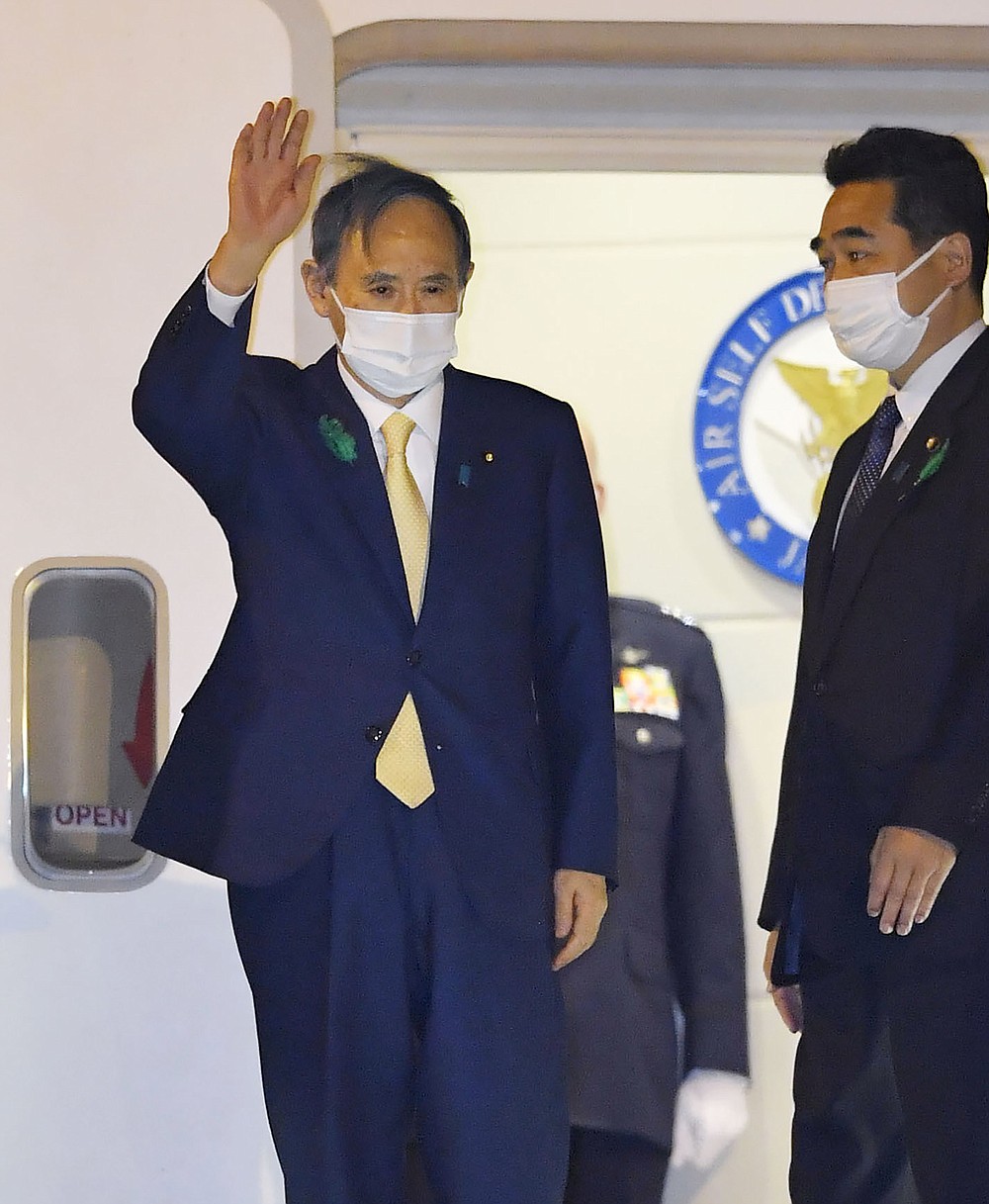 Japanese Prime Minister Yoshihide Suga waves on his departure for the U.S., at Haneda airport, in Tokyo Thursday, April 15, 2021. Suga headed to Washington on Thursday to become a first foreign leader to have a face-to-face meeting with President Joe Biden for talks that would reaffirm the strength of their alliance and how to deal with China's growing assertiveness and challenge to democratic values. (Kyodo News via AP) 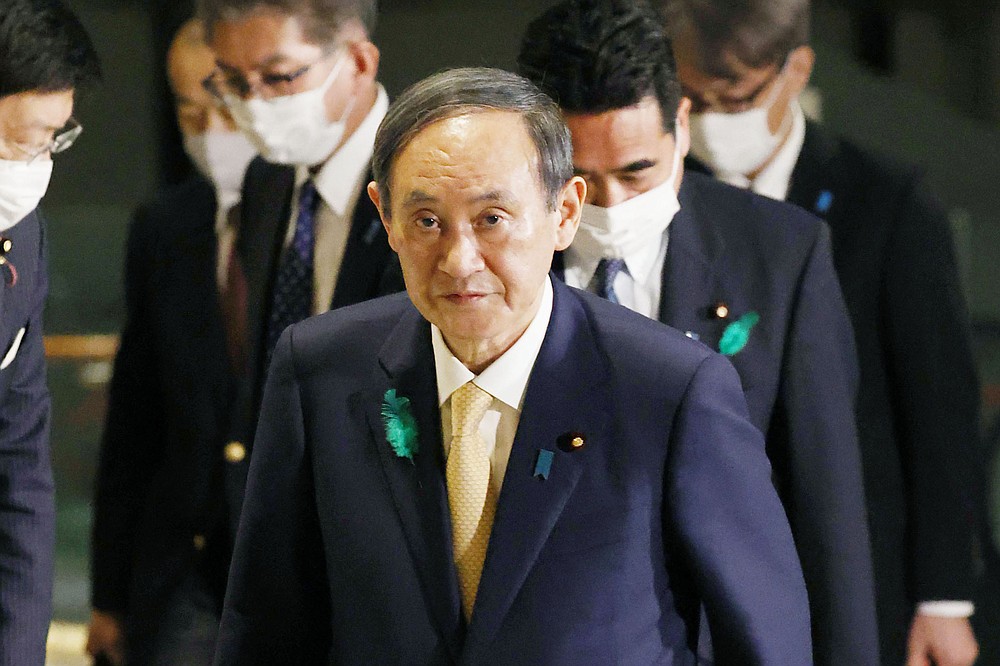 Japanese Prime Minister Yoshihide Suga leaves the prime minister's official residence for the airport, in Tokyo Thursday, April 15, 2021. Suga headed to Washington on Thursday to become a first foreign leader to have a face-to-face meeting with President Joe Biden for talks that would reaffirm the strength of their alliance and how to deal with China's growing assertiveness and challenge to democratic values. (Sadayuki Goto/Kyodo News via AP)
ADVERTISEMENT