Outside groups running campaign ads sometimes working from the shadows by Neal Earley | April 16, 2021 at 4:23 a.m. 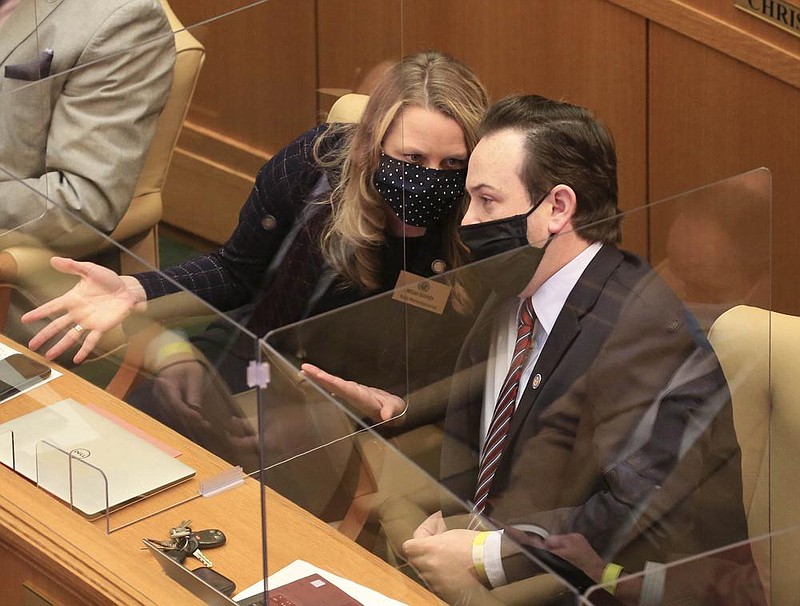 A bill that takes aim at "dark money" spending in judicial races in Arkansas took one step closer to passing with approval from a House committee Thursday.

Dark money, or undisclosed contributions to groups campaigning for or against candidates, has been an issue in Arkansas Supreme Court and Court of Appeals races. While money directly contributed to candidates is often disclosed, funds given to outside groups running campaign ads can be anonymous.

The House Judiciary Committee approved House Bill 1899, which seeks to mandate "comprehensive disclosure" of contributions and expenditures for those spending money in the court races.

The bill's sponsor, Rep. Andrew Collins, D-Little Rock, said a loophole in the state's election laws allows special-interest groups to spend millions of dollars in judicial races, as long as they don't explicitly support a candidate's election or defeat.

"The issue is that through that loophole comes millions and millions of dollars in unchecked, unaccounted-for, mostly out-of-state, special-interest money in appellate judicial elections in particular. That's the Supreme Court and Court of Appeals races," Collins said.

Collins' bill takes aim only at spending and contributions regarding "non-candidate" groups within 120 days of an election.

While campaigns for the Supreme Court are nonpartisan, that has not stopped Washington, D.C.-based conservative groups from funding campaign ads in judicial races in the state.

Voters were bombarded with attack ads in the 2020 Supreme Court race between Barbara Webb and Morgan "Chip" Welch. Supreme Court Justice Courtney Goodson was also hit with numerous attack ads funded by outside groups in her 2018 reelection campaign.

Paul W. Keith, president of the Arkansas Bar Association, backed the bill, saying outside spending in judicial races could undermine the public's confidence in the independence of judges.

"We felt like it's important for the voters to know who is trying to influence those elections," Keith said. "So it's a transparency bill."

The Judiciary Committee also approved a transparency measure aimed at bonds. The bill would require courts that use software offered by the Administrative Office of the Courts to provide information on a defendant's bail.

Sen. Bart Hester, R-Cave Springs, one of the sponsors of the bill, said it would help provide data as to whether defendants in Arkansas are being kept in jail because they can't afford bail. The Senate passed a version of the bill Thursday.

In hopes of keeping fathers accountable, the committee also approved a bill that would require the biological father to pay for half of the "pregnancy and childbirth expenses incurred by the mother of the child."

House Bill 1870 is sponsored by Rep. Aaron Pilkington, R-Clarksville, and passed the committee on a voice vote.